Overview >> Alabama >>  Athens
Athens: Historical Overview
Located in Limestone County in northern Alabama, a mere fifteen miles south of the Tennessee state line, Athens has always been on the periphery—both figuratively and literally—of the Jewish experience in Alabama. Its Jewish congregation was short-lived, although like many other towns in Alabama, it was home to a small number of Jewish merchants in the early-twentieth century.

Incorporated one year before Alabama gained statehood in 1819, the town of Athens has experienced its fair share of Alabama history. The area was home to William Wyatt Bibb, the first governor of Alabama, and was ransacked by Union forces in 1862 during the Civil War. The town originally counted cotton production and the railroad as its economic engines, but with the growth of nearby Huntsville as an aerospace and technology hub, Athens has been gradually drawn into its larger neighbor’s orbit.
Stories of the Jewish Community in Athens 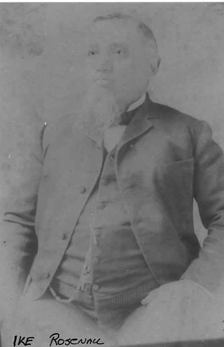 Early Jewish Residents
The Rosenau family was probably the first Jewish presence in Athens, arriving just before the Civil War. Isaac Rosenau emigrated from Germany at age sixteen, served in the Confederate army under Stonewall Jackson, and set up his clothing store adjacent to the county courthouse in 1865. The 1880 U.S. Census lists fourteen Rosenau family members residing in Athens, ranging from one-year-old Joseph to Isaac and his brother Sam. The family ran the business until 1945, when it was sold. While the early Rosenaus were nominally Jewish, the later descendants converted to Christianity.

One of Rosenau’s employees, Henry Warten, was a life-long Jew. Born in Germany in 1854, he came to Athens in 1873 after working in the manufacturing business in New York City. Upon his arrival, he was hired by the Rosenau store as a clerk, a position he retained until 1881, when he opened his own grocery store on the north side of the town square. His wife Mattie, four daughters, and son were with him in Athens by 1900.

Other early Jewish merchants in Athens included the Prussian-born David Hyman and his business partner A. Weil, who had a store on west Market Street. Hyman had established the store in 1874. Surnames like Kirschbaum, Jaffe, Steinberg, Kuhn, Mogill, Teks and Denbo all graced storefronts downtown. Sidney Schiffman, a local merchant, was once quoted in the local newspaper as exclaiming after viewing twenty-five carloads of hogs passing through Athens, that “there goes enough pork to feed all the Jews in the world!” Almost every Jewish business in Athens was centered on the courthouse square in the middle of town. 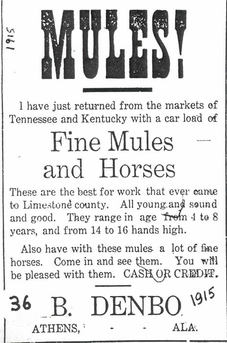 The Community Grows
By the late nineteenth century, Jewish immigrants from Eastern Europe began to settle in Athens. Born in Russia around 1881, Bennie Denbo came to the United States in the late 1890s. He married Ethel Jaffe in 1904 and opened a feed and farm supply store in Athens. One notice in the local newspaper from 1915 advertised that Denbo had just returned from markets in Tennessee and Kentucky with a car load of fine mules and horses to sell. According to Denbo, they were “the best for work that ever came to Limestone County.” Denbo became a prominent local merchant, and a leader of the Commercial Club, which sought to fund various enterprises deemed beneficial to Athens. Family ties drew other Jews to town. Benjamin and Israel Jaffe emigrated from Russia and settled in Athens, where they lived with their sister, Ethel Denbo, and her family. By 1910, Benjamin Jaffe owned a dry goods store in town. Later, Israel opened a clothing store on the downtown square.

Mannie Teks came to the United States from Russia in 1905, and lived in New Jersey initially before moving to Canada. By 1920, he had moved to Athens, where he owned a shoe store next door to Bennie Denbo’s establishment. Joseph Steinberg left Russia for the United States in 1910. He came to Athens and bought out the store of another Russian Jewish immigrant, J. Markovitz, in 1918. Markovitz had established the store in 1899. The Mogills were also Jewish transplants to Athens. Sol Mogill, born in Russia in 1884, met his wife Tillie Simon in Nashville when he was working as a peddler out of Linden, Tennessee. Six of their seven sons were born there, before they relocated to Athens, where they ran a dry goods store. Their daughter Hazel served in the Women’s Army Corps in Italy during World War II.

Jewish Life in Athens
Most Athens Jews observed Jewish traditions at least to some extent. In 1920, the local newspaper reported that Rosh Hashanah was “marked by the closing of every place of business in Athens whose owners are of the Jewish [faith].” Jewish merchants would regularly run newspaper ads during the High Holy Days to inform their customers that they would be closed for business on these Jewish holidays. Despite this level of observance, Athens Jews never built a synagogue, though they did establish a short-lived congregation in 1916. Very little is known about the Athens Hebrew Congregation, other than the snapshot given in 1919 by the American Jewish Year Book. At that time, the congregation had twelve families in its membership ranks. The president was Israel Jaffe while the secretary was Joseph Frey. Three teachers taught thirteen students in the Hebrew school. This congregation did not last long, as most Athens Jews traveled to nearby Huntsville for religious services
The Jewish Community in Athens Today
Despite the existence of a congregation and the success of Jewish merchants, the Jewish population of Athens was never larger than around 40 people. General surveys of American Jewry revealed that in 1927, 28 Jews lived in Athens, a number that grew to 39 in 1937. A few Jewish families lived in Athens after World War II, including the Jaffes and the Goldbergs, who owned a downtown clothing store. The Athens Jewish community had largely disappeared by the 1970s, and today, no Jews remain in the town.