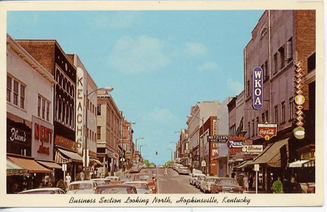 When Bernard Oppenheimer died in the 1850s, his widow Babette married Louis Elb, who settled in Hopkinsville in 1857. By 1860, the Prussian-born Elb was a merchant who owned $8000 worth of land and personal property. During the Civil War, Elb supported the Union and owned a wholesale business that flourished since he was able to sell goods through the military lines. These lines were constantly moving around Hopkinsville, which changed hands between the Northern and Southern armies six different times during the war. Hopkinsville was divided by the war, with some residents backing the Confederacy and others supporting the Union. Despite this turmoil, Elb did well during the 1860s, and was worth $34,000 by the time of the 1870 census.

John Moayan, a Dutch Jewish immigrant, came to Hopkinsville in 1865, initially working for Elb in his store. In 1877, Moayan opened his own retail business, catering to the area’s farmers who came to town to sell their tobacco crop. Moayan’s nephews, Max and Samuel Mendel, worked in the store in 1880. Calling himself “Honest John” and the “Farmer’s Friend,” Moayan became Hopkinsville’s richest merchant by the time of his death in 1898. His daughter Fannie married Louis Elb’s son Moses, who took over the store in 1898. John’s son Max Moayan also worked in the business. Moses Frankel moved to Hopkinsville from Evansville, Indiana in 1862. A native of Bavaria, Frankel opened a dry goods business that quickly flourished. By 1870, he was worth $24,000. Frankel moved to Cincinnati in 1883, leaving his sons Henry, Sam, and Joseph to run the store in Hopkinsville. An 1884 history of Christian County mentioned Moses Frankel as an important local merchant. Henry and Sam continued to run Frankel’s Busy Store into the 20th century. Sam finally closed the business in 1921.

After the railroad reached the town in 1868, Hopkinsville became an agricultural trading center connected to national markets. The Jewish population increased, reaching an estimated 81 people in 1878. Max Myers came to Hopkinsville from Germany in 1876 and opened a butcher shop. Myers ran the business until his death in 1926, after which his son Jake ran it for two more decades.

Despite this growing Jewish community, there seemed to be little organized Jewish life in Hopkinsville in the 19th century. The one exception was the purchase of a cemetery in 1865. Louis Elb, Henry Oppenheimer, and Bernard Rosenstein purchased the land on behalf of the Jewish population of Hopkinsville. Over the years, only 35 people were buried in the cemetery as many local Jews chose to be interred in places like Nashville, Louisville, and Evansville, Indiana.

A Growing Community
By the turn of the century, a new group of Jewish immigrants, this time from Eastern Europe, was beginning to settle in Hopkinsville. Like their German predecessors, these new immigrants concentrated in retail trade. Russian-born Saul Sacks settled in Hopkinsville by 1898. Initially, he had a junk business, but later bought herbs, furs, and feathers from local gatherers and resold them. Samuel Gerstein, a recently arrived Russian immigrant, owned a dry goods store in Hopkinsville by 1910. Sam Klein came in 1901, eventually owning a department store in town. Wolf Geller, who left Russia in 1903, lived in Evansville before moving to Hopkinsville in 1909. His dry goods store remained in business for several decades. Brothers Max and Abe Sabel came to Hopkinsville from Russia in 1905. By 1910, they owned the Sabel Brothers Dry Goods Store. Their younger brother Jacob later joined them to work in the store. Abe and Max split up in 1918, and Abe opened an army surplus store while Max kept the dry goods business. Later, Abe opened Sabel Western Wear; his son Leo eventually took over the business.

Organized Jewish Life in Hopkinsville
It was not until the arrival of these Russian and Polish immigrants that Hopkinsville Jews finally established a congregation, founding Adath Israel around 1910. The death of Henry Bohn in 1923 led to the construction of the congregation’s first synagogue in 1925. Bohn, who died in 1923, left $5000 to the congregation to be used to build a synagogue. Bohn’s bequest came with restrictions: the synagogue had to be Orthodox; and his son-in-law, Sam Klein, who married his daughter Mary, had to lead services. Also, Bohn’s will insisted that weekly services be held in the building on Friday nights and Saturday mornings. Despite these demands, the congregation accepted the gift and built a synagogue. Adath Israel member Wolf Geller designed the small neo-classical building, basing it on the synagogue he had previously attended in Evansville. Located on Sixth Street between Clay and Liberty, the synagogue was dedicated in 1925 in a ceremony featuring Rabbi Harry Margolis of Paducah. Adath Israel had 24 dues paying members in 1926.

Despite Bohn’s requirements, there was a dispute during the construction about where to build the bimah. More traditional members wanted it constructed in the center of the sanctuary, while Geller fought to have it at the front. Since he was the designer, Geller ultimately got his way. Adath Israel had both Orthodox and Reform members. In 1928, the congregation voted to bring in a shochet from St. Louis for a three week trial, with plans to pay him a regular salary if he worked out. Later, traditional members would bring in a shochet from Nashville periodically to slaughter cows and chickens at a local butcher shop. Although they had their own synagogue and cemetery, some Hopkinsville Jews would regularly travel to Nashville or Evansville for services. Many members were buried in other cities. Even Henry Bohn, whose generosity built the synagogue, was buried in the Orthodox cemetery in Nashville.

World War II and After
Despite the new synagogue, the Hopkinsville Jewish community remained small, with only 70 people in 1937. World War II would bring lasting change to the area with the construction of Fort Campbell nearby. During the war, Jewish soldiers stationed at the fort would attend services and special social events at Adath Israel. The town’s growing population attracted an increasing number of Jews; by 1948, 140 Jews lived in Hopkinsville. Siblings Arnold and Frances Myers moved to Hopkinsville from Holly Springs, Mississippi in 1935, opening the Vanity Store, a women’s clothing boutique. Jews remained concentrated in retail business. Sam Bohn’s department store remained in business until he retired in 1960. His sons H.D. and Moses opened their own store, The Factory Outlet, which finally closed in the 1970s after H.D. died. Dan Metzler opened a men’s clothing store downtown in 1920; his son Dan Jr. continued the business after Metzler died in 1946.

Adath Israel never had a full-time rabbi. Sam Klein and Wolf Geller led the congregation’s services through the 1940s and 50s. Later, E.A. Cohen would regularly lead services, helping to keep the small congregation going. Rabbis from nearby Evansville would conduct funerals when the need arose. By the late 1950s, Adath Israel joined the Reform Union of American Hebrew Congregations, and began to bring down student rabbis once a month from Hebrew Union College in Cincinnati. The student rabbi would lead Friday night services and a Saturday night adult education program. Saturday morning services had been discontinued. By 1962, Adath Israel had sixteen member families. Eleven lived in Hopkinsville, while the remainder lived in the nearby towns of Greenville, Central City, and Russellville. Moses Bohn served for over 20 years as president of the congregation.

The Community Declines
By the 1970s, the Jewish community of Hopkinsville had shrunk dramatically. Most of the Jewish children raised in town had moved away. By the 1970s, many of the remaining Jews had retired or passed away. While Fort Campbell remained an economic engine for the town, new Jewish families were not moving to the area. By 1976, Adath Israel had dropped to only seven members. The following year, the remaining members decided to dissolve the congregation. Soon after, the synagogue’s roof collapsed during a storm, and local Jews had the building demolished. Adath Israel’s Torahs were given to congregations in Chattanooga and Evansville. After the dissolution of the congregation, Hopkinsville’s small number of Jews joined synagogues in Nashville.
The Jewish Community in Hopkinsville Today
By 2007, 30 years after the town’s only Jewish congregation closed, only two Jews remained in Hopkinsville.
Sources
Cayce III, D.D. "The Second Promised Land," unpublished paper.