Overview >> North Carolina >>  Jacksonville
Jacksonville: Historical Overview
Jacksonville, North Carolina, was settled because of its prime location at the head of the New River. It soon became a center of production for naval stores, especially turpentine, and a courthouse was built at Wantland’s Ferry nearby. Products shipped up and down the river became the mainstays of the local economy. It was not until 1842 that Jacksonville was officially chartered, and the city was not even laid out until 1849. The town of Jacksonville had its major period of growth after the federal government decided to locate Camp Lejeune in Onslow County in 1940. Within a few days, the population of Jacksonville doubled as hundreds of workers came to the area to work on defense projects for World War II. Property values went up and some buildings in the town were taken over by the Navy. Even though the Jewish population spiked around the same time, the first Jews came to Jacksonville even before World War I.
Stories of the Jewish Community in Jacksonville 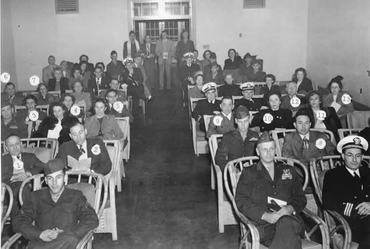 1948 dedication of Camp LeJeune's Jewish Chapel.
Photo courtesy of the Jewish Heritage Foundation of North Carolina
Jews Come to Jacksonville
It’s unclear whether there were Jews in Jacksonville during the 19th century, but by 1920, there was at least one Jewish family living in town. The Max Margolis family moved to Jacksonville in 1912. He and his wife, Fannie, emigrated from Russia in 1903 and had four children: Maurice, Isaac, Bessie, and Lon. Max opened a dry goods store in Jacksonville. Not until World War II and the construction of Camp Lejeune did enough Jews settle in Jacksonville to establish a community.

A Congregation Forms
At first, some Jews traveled to Wilmington, North Carolina, to attend synagogue. Eventually, enough Jewish men lived in Jacksonville that they were able to get together for a minyan, but it was the influence of a unique circuit riding rabbi program that led to the organization of a congregation. In 1953, prominent Charlotte businessman I.D. Blumenthal established a traveling rabbi program to serve the small Jewish communities of the Carolinas under the sponsorship of the North Carolina Association of Jewish Men and Women. Rabbi Harold Friedman, who traveled in a bus outfitted as a sanctuary, began a circuit composed of ten communities in North Carolina, including Jacksonville. Rabbi Friedman would travel from place to place and conduct services on the bus, which had its own Torah and eternal light. Friedman encouraged the small Jewish communities he served to establish formal congregations. During a 1954 visit to Jacksonville, Friedman convinced local Jews to organize as a Conservative congregation. On June 17th, 1955, the State of North Carolina granted a Certificate of Incorporation to the Jacksonville Hebrew Congregation B’nai Mordecai.

The 18 founding families of the congregation included: Milton Adler, T. Feldstein family, Sam Fleishman, Will Fleishman, Lester Gould family, Robert Kalet family, Louis Katzin family, M. Katzin family, Sam Leder family, Margolis family, Izzy Messenger family, Jack Peck family, Jerry Popkin family, Ben Schwartz family, Julius Segerman family, Leonard Suls family, Morris Trachtenberg family, and Martin Turem family. Jack Peck was the first president of the congregation.
Jews of Jacksonville
Like most of the congregation’s founders, Peck had moved to Jacksonville during the war. Born in New York, Peck lived in Greensboro briefly with his wife Edith before moving to Jacksonville in 1942. At first, the Pecks lived with Max and Fannie Margolis. Not long after arriving, Peck purchased the J.P. Scott restaurant, also called Scott’s café. Peck operated the restaurant from 1942 until 1947, when he and Edith converted the establishment into a bakery and luncheonette. In 1962, they moved the business to the New River Shopping Center. The Peck’s business remained there until 1975 when Jack sold it and retired. Peck was involved in several fraternal organizations, including the Shriners, Masons, and B’nai B’rith, and was an officer at the Jacksonville Country Club.

One of the more colorful Jews in Jacksonville was Jerry Popkin. Born and raised in Trenton, New Jersey, Popkin moved to North Carolina in 1941 at the age of 18. At first, he found a job cleaning outhouses at the former Army base, Camp Davis in Onslow County. After Camp Davis was closed by the army, Popkin took over a grocery store and brought in two of his brothers as partners. From there, the Popkins went into the furniture business, buying furniture in Wilmington and getting paid to deliver it to Onslow County residents who could not make the trip. Eventually, they had five furniture stores in the county. After World War II, Popkin made a great deal of money in the battery business. He would travel to other cities, mostly in Florida, and buy car batteries to sell to dealers in North Carolina. Jerry and his brothers also put WLAS on the air in Onslow County in 1954, launching themselves into the broadcasting business.

In 1976, Jerry Popkin ran for the North Carolina State Senate, beating the incumbent Senator, Billy Mills, whom he accused of losing touch with his constituents. A self-styled populist, Popkin made quite an impression at the state capitol when he arrived in a chauffeur-driven Lincoln Continental limousine. Popkin was known for his charity in Onslow County, donating to 118 local churches in one year. Despite his lavish lifestyle, Popkin claimed he was not millionaire, “I just want to live like one. I don’t want to be one. We spend everything we make.” After his death, a bridge in Jacksonville was named after him.
Congregation B'nai Mordecai
Congregation B’nai Mordecai conducted services in English and Hebrew in a variety of different locations. At first, services were held in the rooms above Jack Peck’s bakery. Later on, they were held in rooms above Leder Department store, and, then, in the Katzin Building. Eventually, it was decided that a more suitable location was necessary. At a meeting on February 10, 1955, the congregation agreed to build a synagogue and Jerry Popkin donated a portion of land for the project. They held a fundraiser at a Hadassah installation dinner and ground was broken in September of 1956. The synagogue was completed around 1957 with the help of I.D. Blumenthals of Charlotte. At the time of the building dedication, there were about 32 member families.

The Jewish Community in Jacksonville Today
Unfortunately, the Jewish community grew older as many of the children raised in Jacksonville moved away. In the early 1990s, the synagogue building was returned to the Blumenthal family, who sold it to an African American church. Although they no longer have a synagogue, there are still Jews living in Jacksonville today. They meet for services at the Camp Lejeune Jewish Chapel. The camp does not have a full-time rabbi, but a visiting rabbi conducts services at Lejeune once a month, and a lay leader conducts services at the chapel when the rabbi is not there.