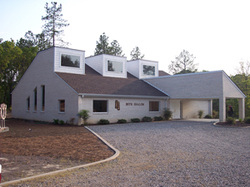 The Sandhills Jewish Congregation's synagogue
Early Jewish Residents
In the 1950s, a few Jewish families moved to Southern Pines, a small town east of Pinehurst Village. By the 1970s, Jewish retirees began to settle in the Pinehurst area. In 1981, they created the Sandhills Jewish Cultural Group, which sponsored various social and cultural events. Later, a handful of Jewish families moved to area, several of whom were doctors hired by the regional medical center. As Pinehurst grew as a tourist and retirement destination, a growing number of Jewish professionals and businesspeople moved to the area. Concerned about passing down their Judaism to their children, they established the Sandhills Jewish Organization in the 1990s, which held regular services and had a religious school. While Jewish youth education was the top priority for this new group, the retirees did not need the same services and initially had little interest in a formal congregation.

A Congregation Forms
Finally, in 1999, the two groups decided to unite and formally establish the Sandhills Jewish Congregation. Lowell Simon, a native New Yorker who had helped broker the merger, was elected president of the new congregation, a position he held for the next ten years. For their first High Holidays, members led the services. For the next few years, the congregation hired student rabbis and retired rabbis to lead services. In 2003, the congregation hired retired rabbi Floyd Herman to be their regular visiting spiritual leader. Rabbi Herman's tenure was followed by Rabbi Kenneth Brickman in 2011. Once a month and on the High Holidays, Rabbi Brickman travels to Pinehurst to lead services. The congregation received a Torah from the Jewish congregation in Whiteville, North Carolina, which was declining and did not need the extra scroll.