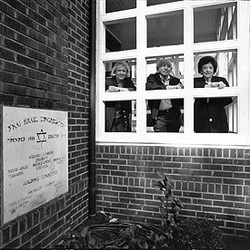 Jews settled in Hattiesburg in the early 20th century, and by 1910, a number of Jews from Russia and Eastern Europe had settled in Mississippi’s “Hub City” Where they established Congregation B’nai Israel in 1915.  Originally founded as an Orthodox congregation, B’nai Israel switched its affiliation to the Reform movement in the 1930s, and soon after engaged Rabbi Arthur Brodey as its first rabbi. Despite the official switch from Orthodox to Reform affiliation, the congregation remained an alliance between Orthodox and Reform Jews. There were simply not enough Jews in Hattiesburg to support two congregations, so members of B’nai Israel compromised and cooperated in order to meet the needs of all congregants. Up until the 1970s, this often meant holding two separate services. 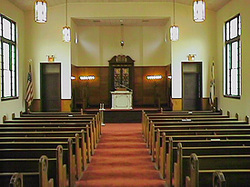 The founding of Congregation and the erection of a synagogue:
In 1908, fifteen Jewish men founded a local chapter of B’nai B’rith (The Children of the Covenant, a charity organization.) The Jews who first moved to Hattiesburg often worshiped together in private homes until the founding of Congregation B’nai Isreal in  September of 1915.  Initially, the congregation met at the local Odd Fellow’s hall. In 1919, they acquired land for a permanent home on the corner of Hardy Street and West Pine Street. The congregation was able to use building materials from the Jewish Welfare Board recreation hut at Camp Shelby, which had recently been torn down, and they finished work on the building in 1920. The building was a simple, white frame building with a sanctuary, auditorium, and Sunday school rooms in the basement.  In 1946, Congregation B’nai Israel, with 55 member families, decided to leave their building on Hardy and West Pine, and begin building a new temple at 901 Mamie Street, where they still reside today 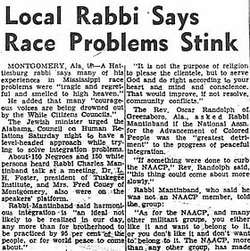 Rabbi Charles Mantinband arrived in 1951 and served the congregation during much of the Civil Rights era. Mantinband was an outspoken proponent of racial equality and civil rights, arguing that Jews had a responsibility to empathize with the plight of Blacks because of the Jewish community’s own experiences with discrimination. Mantinband was a friend and mentor of Clyde Kennard, an African American from Hattiesburg who unsuccessfully tried to integrate Mississippi Southern University and ended up framed on bogus theft charges.

Fearful of violent reprisals, members of B’nai Israel tried to get Mantinband to quiet his voice on civil rights issues. The local White Citizen’s Council threatened B’nai Israel members that they needed to get rid of their outspoken rabbi. Merchant congregants who had heavy investments in Hattiesburg businesses, were especially concerned that their businesses might suffer from boycotts directed at the Jewish community.  Throughout his tenure, Mantinband faced pressure from a congregation that wanted him to stay out of the brewing struggle. Finally, in 1963, Mantinband decided to leave Hattiesburg for a congregation in Longview, Texas. 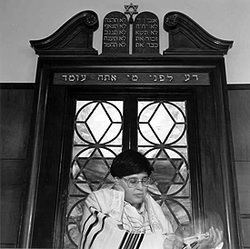 Civil Rights Rabbi rises to national prominence:
Mantinband’s successor was Rabbi David Ben-Ami, who also was active in support of civil rights. Ben-Ami was a member of the "Committee for Concern," the interfaith committee to raise money for the rebuilding of the burned African-American churches in Mississippi in June of 1964. Ben-Ami was also appointed to the Mississippi State Advisory Committee of the United States Commission on Civil Rights.

On February 21, 1964, Ben-Ami organized a community service of worship in observance of a National Brotherhood Week. Lyndon B. Johnson served as honorary chair. In his brotherhood week message Ben-Ami wrote, “No better time exists for a searching of our hearts and minds….Let us hear again the faith of our forebears; let us listen afraid to the inspired hopes of our national conscience; let us obey again the word of our religions.” Dr. John F. Nau, professor at the University of Southern Mississippi, delivered the sermon and Dr. J Ralph Noonkester provided words of greeting. Rev. Joseph Mercer of the Saint Thomas Aquinas Chapel at the University of Southern Mississippi served as a reader, and Rev Homer Peden, president of the Hattiesburg Ministerial association, offered the invocation,

Ben-Ami was the only Hattiesburg clergyman to visit northern activists in jail. In January 1964, the sheriff reported Ben-Ami’s actions to the congregation. During this time, he became close friends with Rev. Robert Beach of the Federal Council of Churches, who bought a house in Hattiesburg hoping to build some bridges between black and white citizens. Ben-Ami was the only white clergy member that had anything to do with him, and Mr. Beach was refused entry into the local Presbyterian Church, opting to worship at the local black Baptist church instead. When word got round about his efforts at delivering free Christmas turkeys to poor African-American households, they asked him to resign. They did so in a “polite and sympathetic manner,” according to Drew Pearson, a syndicated columnist, who publicized Ben-Ami’s story on December 25, 1964. The story entitled, “There was no Room for him the Synagogue,” brought national attention to his case. By February 1965, Ben-Ami and his family moved to Washington, D. C., where he served as a consultant to the Department of Health, Education and Welfare (HEW).
Rabbis in succession:
Starting in the late 1970s, the congregation occasionally relied on student Rabbis. Norman Lipson served as a student Rabbi from 1971-1972. They congregation liked him so much that they were able to raise enough money to hire him as a full-time Rabbi from 1974-1977. Following his tenure, the congregation alternated between  a series of full-time and student rabbis. Full time rabbis during this time included: Samuel Rothberg, full-time (1977-1980); David Ostrich, full-time (1982-1984); Cyril Stanway, full-time (1987-1990); Judith Bluestein, full-time (1990-1994); Reena Judd, full-time (1994-1997; Celso Cukierkorn, full-time (2000-2007); and Uri Barnea, full-time (2007-2014).

A female Rabbi:
In 1969, B’nai Israel was divided over the issue of whether or not to accept a female student rabbi when Sally Priesand was appointed to serve the congregation. The Orthodox faction strongly opposed allowing a woman to serve in this role, and the votes on this issue were so confusing that the final tally was conducted by having congregants stand on opposite sides of a room. Eventually, B’nai Israel accepted Priesand, who later made history as the first female rabbi ordained in the United States. Twenty years later, B’nai Israel became the first Mississippi synagogue to hire a female full-time rabbi when Judith Bluestein led the congregation.