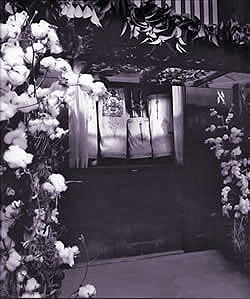 Congregation Anshe Chesed is one of the oldest Jewish congregations in the state of Mississippi.  For over 165 years, it has been at the center of Vicksburg’s Jewish community.

The Jewish history of Vicksburg predates the formal creation of a congregation.  Between 1820 and 1840, about 30 Jewish families worshipped together informally in private homes.  Barnard Yoste, a local merchant, was their president and led services.  After the group outgrew the space available in private homes, Yoste built an upstairs hall in a building he owned on Levee Street, and Vicksburg’s Jews started meeting there.  These early settlers remained very devout, worshipping in the orthodox style and keeping kosher.  By 1841, the growing Jewish population moved to form a congregation, calling it the Hebrew Benevolent Congregation of the Men of Mercy.  By 1862, it had grown to 50 families, and was officially chartered with the state as Congregation Anshe Chesed (People of Loving Kindness).

As the congregation grew, they began the search for a rabbi. They learned of a rabbi named Henry Gotthelf in Louisville, Kentucky who had been only the second Jewish chaplain in the Union army during the Civil War.  Apparently, these proud southerners did not hold this fact against the rabbi, and began to recruit him to come down to Mississippi.  Rabbi Gotthelf was a particularly active rabbi, who had immigrated to the United States from Bavaria with his wife Sophie Launauer.  In 1866, the congregation hired Rabbi Gotthelf at a salary of $40 per month.  Under Gotthelf’s leadership, the congregation gradually moved away from the orthodox tradition, and in 1873 adopted Reform Judaism when they became a charter member of the new Union of American Hebrew Congregations. 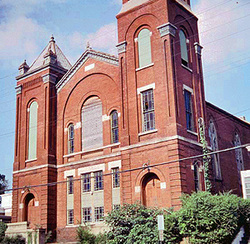 Soon, the congregation took the logical step of building a house of worship.  The congregation secured the required $25,000 by a combination of selling their pews and soliciting private donations from congregants. On February 27, 1868, the congregation purchased land for their temple on Cherry Street.  On May 20, 1870, the temple was officially dedicated, and the Vicksburg press called it, “a day of gladness and joy, such as we will naturally feel on having accomplished a good object.”  Rabbi Max Lillienthal of Cincinnati was the featured speaker for the occasion.  The program began with a parade from the B’nai B’rith hall to the new temple, led by a police escort and Jaeger’s Brass Band from New Orleans.  Special guests included Mississippi Governor James Alcorn, the mayor of Vicksburg, and many other state and local officials.  Several Christian clergy members also took part in the ceremony.  The dedication ceremony was followed by a grand banquet.

After Rabbi Gotthelf died of yellow fever in 1878, the congregation had trouble filling the position until 1883 when Rabbi Herman Bien was invited to lead Anshe Chesed.  He was known as the “poet Rabbi” and he wrote several volumes of poetry, the most impressive of which, Ben Beor, was written while in Vicksburg.  He was well-loved by his congregants for his excellent oratory skills.  On April 22, 1895, however, he was found near death at the Florence Hotel in Birmingham, where he had left a suicide note for his family and friends revealing his disappointment with his life.  The suicide happened just after he was replaced at his Vicksburg pulpit, and followed a job rejection from Temple Emanuel in Birmingham.

Rabbi George Solomon, who had replaced Bien, started in 1895.  Rabbi Solomon was well known for riding his bicycle all over town.  In addition to providing leadership to his congregation, he also operated a Vicksburg private school, which served as an alternative to what was in his view, “a deplorable state of public education.”  After his tenure in Vicksburg, Rabbi Solomon moved on to Congregation Mikveh Israel in Savannah, Georgia. 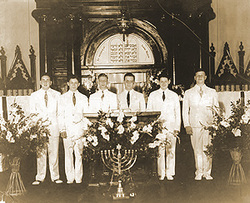 Between 1880 and 1900, a new wave of Jewish immigration bolstered the Jewish population numbers in Vicksburg.  These new Jews did not share the German background of their fellow Vicksburg Jews, but instead came largely from Eastern Europe.  With few exceptions, the new Jews practiced in the orthodox tradition, and rather than joining Anshe Chesed, they formed a new congregation called Ahavas Achim.  They held services at the Old Masonic Temple Building.

Ahavas Achim did not last long however, and financial difficulties forced them to unite with Anshe Chesed.  The decision to join Anshe Chesed is frequently attributed to Rabbi Sol Kory, who began leading the reform temple in 1903.  He made a sincere effort to reach out to these new Vicksburg Jews, and worked to accommodate their traditional practices.  They were allowed to wear yarmulkes during services, which were usually forbidden in classical reform temples.  Rabbi Kory served the congregation until his death in 1936. According to his successor, Rabbi Stanley Brav, “Rabbi Kory must be given full credit for having affected the nearest thing to a united religious community in the course of his ministry, both by winning over newcomers through his personal involvement with their problems and by getting old timers to attend occasional minyans and meet other religious needs deeply felt by the more traditionally minded of the newer families.”  Rabbi Kory was additionally appreciated for his services outside of Vicksburg, frequently visiting both Greenville and Lexington.

Rabbi Brav, who came to Vicksburg in 1937, was notable for forming the first temple youth group in the state of Mississippi as well as the Jewish Welfare Federation of Vicksburg.  Brav was very involved in the larger community as well, giving numerous radio messages which were reprinted in the Vicksburg Evening Post.  When the city celebrated the end of World War II, Rabbi Brav led the city’s ecumenical worship service on the courthouse steps.  He was also committed to interfaith relations, and started an annual Thanksgiving service that brought Christians and Jews together to worship.  In 1948, Rabbi Brav moved on to take a pulpit in Cincinnati.  He was replaced that same year by Rabbi Samuel R. Shillman.  Rabbi Shillman served the congregation only five years but was highly influential in the community, and served as chairman of the Crippled Children’s Society, Vicksburg National Park Study Commission, and president of the Warren County Ministerial Association.  In 1953 he left Vicksburg in favor of a post in Roanoke, Virginia.  Shillman was followed by Leonard Rothstein (1954-1956), Adolf Philippsborn (1956-1961), Robert Blinder (1962-1965), and Allan Schwartzman (1966-1989).  Since 1989, the congregation has not had a full-time rabbi, relying on visiting rabbis and lay leaders. 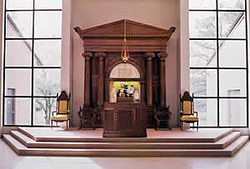 Vicksburg Jews founded other organizations over the years, though none were as successful or long lasting as Anshe Chesed.  The Ladies Hebrew Benevolent Society, which was founded April 3, 1866, worked for over a century to provide charity to those in need.  In 1904, an Anshe Chesed sisterhood was finally founded.  Jewish men in Vicksburg founded a chapter of B’nai B’rith in 1867, though it became inactive in the 1940s.

In late 1960s, the congregation decided to move out of downtown, and built a smaller temple on Baldwin’s Ferry Road, close to the National Military Park.  Their original building was town down, though the old ark has been preserved as the centerpiece of the sanctuary at the Museum of the Southern Jewish Experience in Utica, Mississippi.

Today, only about twenty or so members remain in the congregation, which can no longer even support a student rabbi.  And yet, Anshe Chesed still holds services every Friday night.  Each week, twelve or so people gather for the lay-led service, and afterwards, the congregants go out to dinner together.  Anshe Chesed is a perfect example of how even the smallest congregation need not be weak or inactive.  Vicksburg’s Jews remain committed to keeping Jewish life alive in the area for as long as they can.  Through Anshe Chesed, they have done so for over 165 years.