Overview >> Louisana >>  Plaquemine
Plaquemine: Historical Overview
Along the west banks of the Mississippi River just south of Baton Rouge lies the small town of Plaquemine. Incorporated in 1838, Plaquemine takes the name of the bayou that used to carry colonial settlers westward on their way towards the area now known as Acadiana. By the mid-19th century, Plaquemine had become one of the most important steamboat landings between New Orleans and Baton Rouge. The traffic through the town, strategically located at the intersection of the bayou and the river, created plenty of entrepreneurial opportunities for those willing to relocate. A small yet devoted group of Jewish immigrants who had arrived in New Orleans from both Alsace and Poland settled in the area in the early 1850s. In the years to come, the river on which these Jews made their homes would prove to be both a blessing and a curse, bringing both prosperity and devastation upon the Jewish community of Plaquemine.
Stories of the Jewish Community in Plaquemine 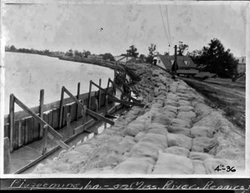 Early Settlers
The first Jews who arrived in this small town opened small dry goods store along the riverfront. Brothers Samuel and Leopold Kahn emigrated from Alsace and operated a store that by 1860 was worth over $10,000. Another Alsatian immigrant, Leon Meyer, operated a dry goods store and speculated in valuable real estate along the famed River Road. A. Kowalski, a dry goods merchant from Poland, joined forces with his brother Lewis and M. Goldman to open a small merchandise store. In addition to these stores, numerous Jewish peddlers who had recently immigrated to New Orleans sold their goods in Plaquemine. These itinerant businessmen traveled along State Highway 1, stopping in other such emerging towns as Port Allen, Donaldsonville, Napoleonville, and Thibodaux. Once they had acquired a sufficient income to settle down, start a family, and open a brick-and-mortar store, a number did so along Main Street in downtown Plaquemine.

Organized Jewish Life in Plaquemine
Not long after Jews began to make their presence known in Plaquemine’s commercial life did they organize a congregation. On March 20, 1856, the Levy, Kahn, Kowalski, Meyer, and Lehman families incorporated the Hebrew Benevolent Society of Plaquemine “to acquire a temple and establish a cemetery.” Before the end of the year, these families funded the purchase of a burial ground at the intersection of Federal and Division Streets. Weekly services were at first held in its congregants’ homes, but in 1860, the Hebrew Benevolent Society purchased a riverfront house for holding services. By 1878, the more than 60 Jews living in Plaquemine chartered Congregation Ohavai Sholom (Lovers of Peace) to replace the Hebrew Benevolent Society. Nearly one month after Ohavai Sholom’s was established, B’nai B’rith representative and Jewish South reporter Charles Wessolowsky traveled through Plaquemine. Congregation president Leon Meyer and Sabbath-school superintendent Morris Lehman entertained Wessolowsky and showed him “the interesting places of Plaquemine, of which, foremost stands the little, neatly-fitted-up synagogue.” Upon leaving Plaquemine, Wessolowsky believed strongly that the Jewish community’s efforts “will bring success to the congregation, which is young and few in number.”

A Resilient Community
Despite all the strides made by the Jewish community of Plaquemine in the years since their arrival, it would all soon wash away—literally. Shifts in the Mississippi’s stream channel were not uncommon; the early Plaquemine settlement was partly destroyed in 1838 when the river changed its path ever so slightly. However, in 1880, one such shift eroded Plaquemine’s banks and caused much of the riverfront portion of the town to fall into the river. The building serving as Ohavai Sholom’s temple as well as many Jewish-owned and operated businesses fell victim to the merciless river. While no Jews died in the tragedy, commercial as well as religious life came to a screeching halt. Plaquemine needed to be rebuilt, a seemingly overwhelming task that was met with determination by a Jewish community hanging on for dear life.

By the 20th century, Plaquemine had bounced back from its descent into the depths of the river that had given the town so much. Railroads had supplanted rivers as the main shipping conduit in the years since the tragedy and, in turn, other industries engaged the Jewish community. The lumber industry, among others, had generated plenty of jobs in the area. Several of the parish’s plantation tracts were sold to start-up lumber companies and related businesses, some still surviving, developed in turn. Louis Bluestein, a dry goods merchant born and raised in Kentucky, settled with his family in Plaquemine. His store in the new downtown area, located a quarter mile away from the river to allow the construction of an enhanced levee, featured a wide assortment of clothing, shoes, and hats. Heyman Uhry, a clothier who emigrated from Germany in 1883, opened a store on the same street. Emile Hirsch, an Alsatian immigrant who first settled in Donaldsonville, settled in Plaquemine in the late 1880s and operated a large furniture store. In addition to his successful business, Emile purchased over one hundred plots of land across the parish since he believed that investing in real estate was safer than depositing his earnings into unreliable banks. Delphine, Emile’s wife, sold the furniture business after Emile’s death and lived off his lucrative real estate interests.

Religious life for the Jews of Plaquemine proved as resilient as commercial life. While it is uncertain whether they continued to pray as a congregation after the temple’s falling into the river, Plaquemine Jews eventually reestablished Ohavai Sholom at the turn of the century. Fifteen families signed a new charter in 1905. Under the leadership of congregation president Moise Levy, the fledgling congregation constructed a temple on Eden Street, increased its membership to 20 families, held services semi-monthly and on holidays, and organized a religious school of fifteen students. Furthermore, the female members of Ohavai Sholom founded the Jewish Ladies’ Aid Society to care for the cemetery, one of the few elements of Jewish life that had survived the past 50 years. Jewish life in Plaquemine was indeed thriving once again.

The Community Declines
Over the next 20 years, however, the Jewish population of Plaquemine would gradually migrate to nearby Baton Rouge and the other large cities in southern Louisiana. Membership at Ohavai Sholom decreased from 20 families in 1907 to ten families in 1910 and again to a mere handful by 1920, when services were only held on holidays. Most of the Jews who remained in Plaquemine began to attend services at B’nai Zion, the temple in Baton Rouge. In fact, those who attended services in Baton Rouge weekly became very familiar with the ferry schedule so they could cross the Mississippi River and arrive at the temple on time. By 1932, Ohavai Sholom had become defunct due to the large number of deaths and the exodus of Jews upriver. Except for the times few and far between when “about ten members would father for services on special occasions,” services were discontinued. The cemetery continued to be cared for by Esther Dardenne, longtime president of the Jewish Ladies’ Aid Society and grandmother of current Louisiana Secretary of State Jay Dardenne.
The Jewish Community in Plaquemine Today
Since the end of World War II, Plaquemine’s Jewish community has existed solely as a subgroup of Baton Rouge’s. The only Jewish-owned store had been a Bart-Well, a short-lived chain of department stores from Baton Rouge owned by Julius Weill and non-Jew Phillip Barbier. The Bart-Well store located in Plaquemine, however, closed in the early 1980s. Today, the Jewish cemetery remains the only visible vestige of a small Jewish community that could not be washed away by the river. Over time, changing economics and demographics have proven to be more formidable enemies.