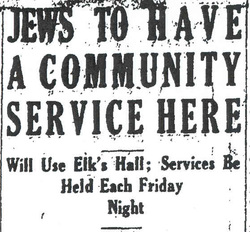 Early Settlers
In 1892, German immigrants Emanuel and Amelia Crine came to Dothan from Georgia with their children. In Dothan, the Crines expanded their family to six children and became leading members of the fledgling community. The Crines led small services in their home with the few other Jewish families in Dothan for many years, even after Emanuel died in the late 1890s.

Not long after the Crines settled in Dothan, more Jewish immigrants found their way to the sleepy peanut capital of Alabama. The family that perhaps features most prominently in Dothan’s Jewish history soon came to set down roots in the town. When Hyman Blumberg came to the United States from Lithuania he had little economic means. Yet with his wife Ester, an American-born child of English immigrants, he would start one of the most prosperous families in Dothan’s history. Soon after they came to Dothan, their first son Myer was born in 1892. After Myer came six other children. In 1911, Blumberg, along with Sol Lurie and Myer Levine, bought what remained of the real estate on Dothan’s Main Street. With the help of his wife and children, Blumberg operated a small dry goods store out of that original space. Over the years, however, that original seed of investment would grow to something much larger as his small shop eventually became the largest department store in Dothan.

The women of Dothan actually started the first official organization of Jews in Dothan with the formation of a Sisterhood chapter, behind the initiative of Mrs. Myer Blumberg. It was not until 1928, when the growing number of Jewish children made the need for a formal congregation more urgent, that Dothan’s Jews finally formed an organized congregation. The legally constituted body of Temple Emanu-El of Dothan was formed in the January of 1929, with fourteen founding families. Among the founding members were children of Dothan’s earliest Jewish families: Myer Blumberg, Henry Crine, and Joe Kraselsky. Without a building of its own, the young community rented out the local Elks Club. Visiting Rabbi Edmund A. Landau led services twice a month; lay members of the congregation led services on the High Holidays. Even in that first year of services, Temple Emanu-El had a choir, with several Blumberg and Crine children taking part.

In 1929, under the leadership of its first president, Henry Crine, Temple Emanu-El bought a plot of land to construct its own building. In the meantime, the newly formed Jewish community enthusiastically celebrated its first High Holiday service, taking over the Elks Club as a fully functioning Jewish Community Center. Members met every Friday for services led by young men acting as lay leaders, and the center provided an active space for socialization and community events. Mrs. Myer Blumberg organized and ran Temple Emanu-El’s first Sunday School. From the early days of Temple Emanu-El, the future appeared bright for the Jewish community of Dothan; however, the effects of global economic forces and the malignant spread of the boll weevil rushed into their small community. The growth of the fledgling congregation came to a jarring stop as the 1930s brought on the Great Depression, causing several members to leave Dothan. The lot purchased for housing congregation Emanu-El sat vacant for over a decade.

When peanuts began to grow again, and Dothan revived from the Depression, the Jews of Temple Emanu-El emerged from their dormant state and reactivated in 1938 under president Randolph G. Lurie. Though some members had moved away and many were financially weakened, the Jews of Dothan persistently worked to keep their community alive. With the Blumberg family leading the charge, Temple Emanu-El took on the difficult task of fundraising for construction of a new synagogue. Despite the climate of slow economic recovery, the community succeeded in raising sufficient funds. On October 27, 1940, the congregation laid the cornerstone of the building that would contain their holy services, religious schools, and community events for the next seventy years. While Rabbi Edmund Landau of Albany, Georgia, was the main speaker, other rabbis from Birmingham, Mobile, and Pensacola also took part in the ceremony. Around this time, Emanu-El received a rescued Torah scroll from a synagogue in Breslau, Germany, which had burnt to the ground in the terrible events of Kristalnacht.

Soon after the completion of construction of their new temple in 1941, Emanu-El welcomed their first full-time, spiritual leader, Rabbi Alfred Wolf, who had just been ordained by the Hebrew Union College. Also in 1941, Emanu-El joined the Union of American Hebrew Congregations, the central organization of Reform Judaism. During his five-year tenure in Dothan, Rabbi Wolf led an active and passionate Jewish community that grew tremendously when the demands of the Second World War brought hundreds of young Jewish servicemen to nearby military stations, Fort Rucker and Napier Field. 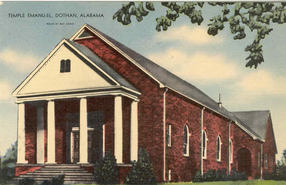 World War II
During holidays, the members of Emanu-El offered up their living rooms to entertain and feed the young men who were hundreds of miles away from their own homes in places like Brooklyn, Chicago, and Cleveland. A weekly brunch was held for the soldiers at the temple. The servicemen attended Emanu-El on the High Holidays, with Private Morris Berman acting as cantor during the Yom Kippur service in 1942. In 1943, the soldiers held their own Orthodox service on the second day of Rosh Hashanah at the temple. On one notable Passover in 1943, Emanu–El congregants, along with Rabbi Wolf, traveled to Napier Field to join the servicemen in what was likely the largest Passover seder in Dothan’s history. Longtime residents of Dothan still remember the massive piles of matzah balls cooked by the women of Emanu-El for the hundreds of servicemen. In 1944, the temple-sponsored seder at Camp Rucker drew one thousand people, and German prisoners-of-war were brought in to help with the massive dinner. Many Jewish G.I.'s stationed in the area got married to their hometown sweethearts at Emanu-El. Some married Jewish women from Dothan whom they had met while stationed in the area. During the war, the congregation members also sold war bonds and raised thousands of dollars for the United Jewish Appeal and Jewish Welfare Fund. 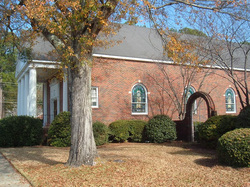 The Mid-Twentieth Century
When Rabbi Wolf left Dothan in 1946 to take a pulpit in Ohio, he was replaced by Martin Hinchin, who had just been ordained by Hebrew Union College. Four years later, Hinchin was replaced by Rabbi Meyer Marx. At the beginning of the 1950s, Temple Emanu-El refurbished and expanded its building, and many of its congregants enjoyed similar prosperity and growth. The Blumberg family store, once a small, one-room shop, now had grown into Houston County’s largest department store. In the 1950s, Blumberg and Son’s sold a wide variety of goods ranging from home appliances to women’s clothing and employed a staff of over one hundred. It was the first store in the area to install an escalator, and people would come miles just to ride it.

Civic Engagement
The prosperous Jews of Dothan, like the Blumbergs, experienced relative acceptance and tolerance from the predominantly non-Jewish town. The town paper, the Dothan Eagle, frequently wrote favorable articles about Jewish life in Dothan and Jewish residents often joined civic organizations like the Masonics and Elks. Many joined the Dothan Country Club. In fact, some Jews served on the country club's board of directors and one, Bill Nomberg, eventually became its president. Likewise, Emanu-El also served as an integral part of the wider Dothan community by sponsoring Boy and Girl Scout troops, selling tickets to the Annual Peanut Festival, holding auditions for local theater groups, and, later on, hosting Tet parties for Dothan’s small Vietnamese community.

A Growing Community
Throughout the 1960s and 1970s, Temple Emanu-El continued to grow and expand. It continued to improve its building, completing a new social hall, classrooms, and kitchen in 1963. Despite an electrical fire in 1967 that caused extensive damage to the ceiling of the sanctuary and ark, members of Emanu-El steadfastly met for services every week. With Torah scrolls saved from the fire by member Sam Behrman, Emanu-El could continue to worship, even if their sanctuary was a bit charred.

In 1979, Temple Emanu-El celebrated its fitieth anniversary with a luncheon in its fellowship hall and an evening party at the Dothan Country Club. Their rabbi at the time, Paul Tuchman, compiled a small booklet that briefly summarized the history of Jewish life in Dothan since 1929 and included letters of reflection from past rabbis, including one from Rabbi Wolf in which he fondly recalled the early days of Emanu-El. The celebration of its golden anniversary reflected Emanu-El’s hopeful and energetic mood. In his introduction to the anniversary booklet, Rabbi Tuchman’s note exudes optimism about the future of the Jewish community in Dothan: "For a congregation, the age of fifty is still youth. We are strong, and growing stronger. Dothan’s rapid and continuing growth will surely bring more Jews to the area, and more of the Temple’s children home as permanent residents…It is devotion and concern of our members which have carried us thus far, and will carry us farther."
The Jewish Community in Dothan Today
Unfortunately for Emanu-El, Rabbi Tuchman’s optimistic vision for their future did not come to pass in the ensuing years. In 1980, there were an estimated 205 Jews in Dothan. By 2000, there were only about 100. In recent years, the median age of Emanu-El congregants has gone up significantly, as the number of children and new families has plummeted. When family businesses closed down, the children of Emanu-El’s founding members moved on to distant, more populous cities. The former grandeur of Blumberg and Sons’ escalator stopped running many years ago. The grandchildren of Hyman and Ester had moved on to own and operate hotel chains. Despite this decline, in 2004, Emanu-El celebrated its seventy-fifth anniversary with a year-long series of talks and celebrations.

Rabbi Larry Mahrer retired from the congregation in 2006. With no one to run their religious school or their worship services, Emanu-El’s congregants looked towards their future with uncertainty and anxiety. However, in 2007 they were able to hire a new and enthusiastic rabbi as Lynne Goldsmith became Emanu-El’s first full-time, female rabbi.

Temple Emanu-El has further reason to be optimistic due to the continuing legacy of the Blumberg family. In the fall of 2007, a group of committed members of Emanu-El, with significant financial backing from the Blumberg family, started the Blumberg Family Jewish Community Services (JCS). The aim of JCS is to keep the Jewish community alive and well in Dothan, by providing financial support to community members during emergencies, helping finance religious education, and attracting new Jewish families to Dothan through its Family Relocation Program, which offers generous grants of up to $50,000. As of mid-2014, the JCS has successfully relocated 11 Jewish families to Dothan, an aggregate of twenty adults and nine children, from New York, Florida, Pennsylvania, Georgia, Illinois, Virginia, California, and Massachusetts.

With a powerful combination of strong lay and Rabbinic leadership, and with the on-going support of the JCS, Temple Emanu-El is reinvigorated and full of positive vitality. Membership and Religious School enrollment have grown, Sisterhood and Hadassah remain strong, and there is the more recent addition of an active Brotherhood. The members are proud to say that Temple Emanu-El is “small but mighty,” standing tall as the only house of Jewish worship, study, and assembly within a ninety-mile radius.​

Dothan continues to be fertile ground for the Jewish community. The efforts of a tenacious few have marked Dothan’s Jewish history throughout; from the original families who would not let their religious customs die despite the tiny Jewish population; to the early entrepreneurs who made a name for themselves in a new, strange land; to those who would not let the impact of the Great Depression stop them from raising money for a sanctuary of their own; to the original farmers who discovered that peanuts could grow in the previously barren soil.