Raphael Moses
Georgia’s Jewish history stretches back to 1733 when the ship the William and Sarah landed at Savannah with 42 Jews.  This small group made Savannah the largest Jewish settlement in England’s North American colonies at the time.  This group organized a congregation, Mickve Israel, in 1735.  Savannah Jews like Mordecai Sheftall and Moses Nunes played leading roles in the development of the colony and in the fight for independence from England. Savannah’s early Jewish settlement was an exception, as a second Jewish congregation would not be founded in Georgia for another century. As late as 1826, only about 400 Jews lived in the state. 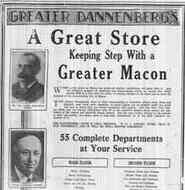 Ad for Dannenberg's, Macon
In the years before the Civil War, Jewish immigrants from central Europe settled in Georgia’s interior in greater numbers.  They founded congregations in Augusta (1846), Columbus (1854), Albany (1854), Macon (1859), West Point (1859), and Atlanta (1862).  During the war, Georgia Jews, even though most were fairly recent immigrants, supported the Confederacy.  Louis Merz, a young merchant in La Grange, volunteered to serve in the Confederate army “from a sense of duty” according to the local newspaper. Merz sent in reports from the war to the newspaper before his death at the Battle of Antietam. A staunch secessionist, Raphael Moses of Columbus was too old to serve in a combat position, but became the Confederate Commissary for Georgia, in charge of supplying and feeding 54,000 Confederate soldiers. Moses carried out the last orders of the Confederacy after President Jefferson Davis ordered him to keep boxes filled with $40,000 worth of gold and silver bullion and make sure it was used to help defeated returning soldiers. Louis Haiman of Columbus was the largest sword manufacturer in the South during the war, with his factory producing 250 swords a day to outfit Confederate soldiers.

Herman Myers,
first Jewish mayor of Savannah
After the Civil War, new Jewish congregations were formed in Athens (1872), Rome (1875), Brunswick (1886), Bainbridge (1902), and Valdosta (1908).  During this period, Georgia Jews concentrated in retail trade, opening up stores in the small towns and big cities of the state.  Several of these grew into large department stores. The M. Rich Dry Goods store started modestly in Atlanta just after the Civil War, but eventually became the hugely successful Rich’s Department Store, which was run by members of the Rich family until they sold the chain of stores in 1976. In Albany, Jacob Rosenberg opened the Rosenberg Brothers Department Store, which remained in business for 96 years before his grandson Ralph Rosenberg closed it in 1991. Russian immigrants Pressley and Joe Esserman opened a store in Rome in 1896 that remained in operation for almost a century. In Macon, Joseph Dannenberg’s wholesale operation, founded in the 1880s, grew into a successful department store due to the efforts of his son Walter. In Fitzgerald, Jewish merchants banded together during the Depression to form the Hebrew Commercial Alliance, which lent money to Jewish businesses that did not have the cash to pay their suppliers.  The alliance soon grew to include Jewish merchants from fifteen South Georgia counties and later set up a wholesale operation which supplied merchandise to its members. 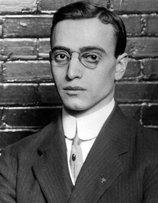 Leo Frank
This economic role led many Georgia Jews to become leaders in their communities. In Rome, Max Meyerhardt became a strong advocate for public education and libraries, helping to found the Rome public school system in 1884 and the city’s Carnegie Library in 1911.  Meyerhardt also spent seven years as the Grand Worshipful Master of Masonry for the entire State of Georgia.  Moses Michael, a successful Athens businessman, founded the Athens Savings Bank in 1892 and served as the president of the Chamber of Commerce. Michael spent many years on the Athens Board of Education and helped found the East Athens Night School. Several Jews have been elected to political office in Georgia. Jews have served as mayor of numerous Georgia cities. In Savannah, Herman Myers became the city’s first Jewish mayor in 1895, and made several significant improvements to the city. Sam Massell was elected mayor of Atlanta in 1969 after a divisive campaign in which he ran against the city’s “old boy” power structure and appealed to newly enfranchised African American voters.  Four years later, Massell was defeated by Maynard Jackson, Atlanta’s first black mayor, in a racially charged campaign. 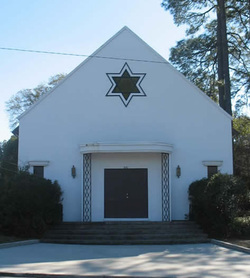 Waycross Hebrew Center
As shown by Massell’s tumultuous political career, Jews were affected by the social turmoil of the region. Atlanta was the site of perhaps the most notorious act of anti-Semitism in American history.  Leo Frank, the superintendent of a pencil factory, was convicted of murdering one of his employees, 13-year-old Mary Phagan.  After his death sentence was commuted by the governor in 1915, a mob took Frank from prison and lynched him. This violent act of anti-Semitism deeply unsettled the Georgia Jewish community.  Unfortunately, it would not be the last incident of violence. During the Civil Rights era, white supremacists bombed Atlanta’s Hebrew Benevolent Congregation in retaliation for Rabbi Jacob Rothschild’s outspoken support for racial equality.  If the Leo Frank lynching frightened Atlanta Jews into silence, the 1958 temple bombing had the opposite effect. Temple members who had been uncomfortable with Rothschild’s activism rallied behind their rabbi after the bombing. The outpouring of support from the larger community comforted Atlanta Jews.

By the middle decades of the 20th century, new congregations were established in Waycross (1924), Dalton (1941), Fitzgerald (1941), La Grange (1945), and Vidalia (1964). Many of these communities grew out of the industrial development of the state as many northern textile firms moved their operations to Georgia.  H.R. “Dick” Kaminsky came to Georgia from Brooklyn, opening the Perfect Pants Manufacturing Company in Ashburn in 1934.  Two years later, he moved the business to Fitzgerald. Chicago-native Ira Nochumson helped make Dalton the carpet manufacturing capital of the U.S. after World War II.  David Grossman, who lived in New York but owned a lingerie factory in Vidalia, built a synagogue for Vidalia’s small Orthodox congregation in 1969. 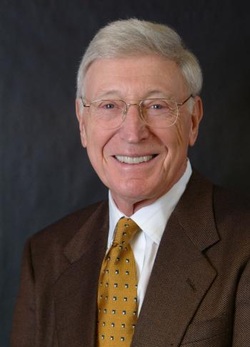 Bernie Marcus
Over the last several decades, the Georgia Jewish community has seen tremendous change.  As in many other parts of the South, Jewish communities in smaller cities and towns have experienced significant decline. Many of the children raised in these small congregations in the 1950s and 60s have not returned.  The Jewish communities of Macon, Augusta, and Columbus, while still vibrant, have shrunk in recent decades. Meanwhile, the state’s small town congregations are struggling to survive. In 2005, the Waycross Hebrew Center’s newsletter declared, “we are shrinking.”  After their community Seder drew 47 people in 2008, congregation president Al Jacobson noted that “we were saddened by the fact that there was not one Jewish child to ask the four questions. We need youth.” One exception to this trend is Dahlonega, where a congregation was established in 2003 to serve Jews living in the hills of north Georgia.

While small Jewish communities have declined across the state, the overall Jewish population of Georgia has exploded over the last few decades. An estimated 34,610 Jews lived in Georgia in 1980, while 127,670 lived there in 2011.  Virtually all of this growth has been centered in the Atlanta metropolitan area, which has become one of the largest Jewish communities in the country.  As Atlanta has emerged as a corporate center, Jews from the North have flocked to the city in search of economic opportunity and a warmer climate. By the end of 2004, 700 of the “Fortune 1000” firms had offices in Atlanta.  One of these was Home Depot, founded in Atlanta in 1978 by New Jersey-born Bernie Marcus and native New Yorker Arthur Blank.  By 2006, an estimated 120,000 Jews lived in and around Atlanta. This amazing growth in the Atlanta Jewish community can be seen in the increasing number of Jewish congregations in the city.  In 1947, there were six Jewish congregations in Atlanta.  By 2012, there were 38.

Georgia encompasses the full diversity of the Jewish South.  Home to both shrinking communities as well as the largest southern Jewish community north of south Florida,  Georgia is both thriving and declining Jewishly. In 2012, over 94% of Georgia Jews lived in the Atlanta metro area. This trend shows no sign of abating. Thus, while Georgia’s Jewish population continues to grow, most of its Jewish communities face an uncertain future.