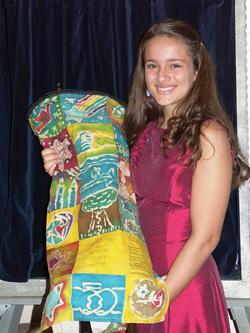 Rachel Glazer celebrates her 2007 Bat Mitzvah in Dahlonega.
Photo courtesy of Arthur Glazer.
A New Community
Located in the hills of north Georgia, Temple Shalom B’harim is a pioneer congregation, bringing Jewish religious life to an area that previously had very little, if any at all. According to the exhaustive study of America’s Jewish population done by Harry Linfield, there were no Jews living in Dahlonega in 1937, while only 11 lived in nearby Gainesville. In the 1980s, the isolated Jews of upcountry Georgia began to lay the foundation of a future Jewish community. The current congregation first met at the end of the 20th century, adopting the name Shalom B’harim – Hebrew for “Peace in the Mountains.” Beginning in 2003, the congregation officially began holding religious services in the Dahlonega Presbyterian Church. In recent years, High Holiday services have been held at nearby Camp Coleman, a summer camp affiliated with the Union for Reform Judaism.Though Temple Shalom B’harim is based in Dahlonega, its membership spans a 35-mile radius around the small town of roughly 3,000 people. Approximately 40 to 60 people attend its monthly services, with 80 to 110 attending during the High Holidays. The congregation has 50 member families.

The unique position of this congregation is the outcome of new groups settling in northern Georgia. A bevy of “half backs” – Florida retirees who have left and arrived half way back North in the scenic upcountry of Georgia – has augmented the Jewish population. Members of Shalom B’harim contend that there is no typical congregant, but rather a diverse cross-section of members who contribute to the sustainability of the temple. Many work in Gainesville, such as optometrist Dr. Eliot Brass, banker Stan Applebaum, and computer technician Arthur Glazer. Other members are of less ordinary professions, such as the Israeli Pedawer family who owns a vineyard. Despite this variety of occupations and locations, the temple membership is cohesive, with strong affection for each other and dedication to the community. They secure enough voluntary contributions to allow a lay person to lead monthly services and to provide a preschool education program, albeit for only a handful of Jewish children. Shalom B’harim currently has no dues-paying structure. Religious services are run by Mitch Cohen, an engineer from Atlanta, and the congregation's spiritual leader. According to his blog, the temple is not affiliated with any denomination and serves as an “authentically Jewish congregation for Jews throughout North Georgia and for those from Atlanta (or even NC) who need the mountains as a spiritual context.” 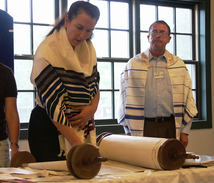 Although the congregation is unaffiliated with any national movement, the services are Reform in nature, using the Reform prayer book as well as guitar and other instruments. Members of Shalom B’harim have created a space for Jewish life in a region traditionally not inhabited by Jews. According to congregant Molly Glazer, “Shalom B’harim is filling a need that wasn’t there before. People come to the mountains and are looking for a sense of community that the temple provides.” Members are sensitive to the fact that this emergent Jewish community is sprouting in a stronghold of the Bible Belt. The congregation still meets in a Presbyterian Church and has cordial relations with local Christian groups, including joint organization of food drives. But the overwhelming Protestant character of the area emphasizes the distinctiveness of its Jewish element. This context is why Mitch Cohen’s blog has a disclaimer that the temple is not a Messianic Jewish affiliate, though he admits “Jesus was a wonderful Jew.”
The Jewish Community in Dahlonega Today
Temple Shalom B’harim belies the trend of decline and disappearance of small Southern Jewish communities. It nourishes hope for growth of other Jewish communities. Past President Eliot Brass believes the congregation can only grow from its present state and Molly Glazer contends the membership is getting younger. The future may even hold the construction of a permanent synagogue. But for now, Dahlonega is a living example of Jewish rebirth in the modern South.