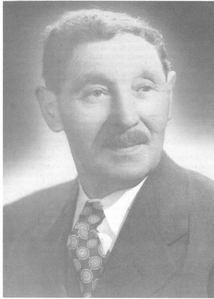 Early Settlers
Two of the cornerstones of the Jasper Jewish community were brothers-in-law from the same town of Khitish in Polish Russia. Both Sol Green and Ike Engel arrived in Jasper as peddlers. Sol was married to Ike’s sister Sarah. He and Sarah initially settled in New York though soon moved to Birmingham, Alabama, where Sarah’s uncle lived. Green began to peddle in the small mining towns in Walker County, before opening a store in downtown Jasper, which flourished for forty-five years. Green and his family became pillars of the local Jewish community, with Sol serving as the first president of Temple Emanu-El.​
​
Ike Engel came from Khitish to Birmingham in 1903 when he was 17 years old. He started peddling in the mining towns around Jasper. He also spent time working in a coal mine and lumber mill. He eventually opened a dry goods store in Jasper. Engel’s business was one of the only stores in Jasper to evade bankruptcy during the Great Depression. Ike and his wife Fannie, whom he met before coming to the United States, went on to have five children. Fannie made hats to sell in the store. Though they were merchants, the Engels took part in country life, raising chickens, ducks, geese, and a cow around their large property. The success of their store and family despite economic hardship is a tribute to their self-sufficiency and prudent decision making. Ike’s son Joe later built a successful retail chain of Top Dollar stores across the region with his brother-in-law J. George Mitnick. 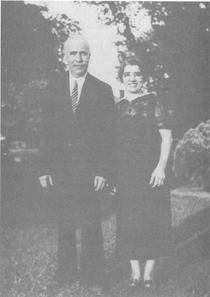 Economic and Civic Life
Jews in Jasper were very integrated into the economic and civic life of the town. The May family exemplifies this integration and commitment. Gerson and Fannie May emigrated from Latvia in 1905. They settled in Dora, Alabama, where they opened a general merchandise store. After the store burned, they moved to Chattanooga and then Birmingham before opening a store in Parrish, Alabama. The family became active members of the temple in Jasper. Gerson was a leader of the local business community, serving several years as a director of the Dora Bank. His son Ike also served on the bank’s board and later became its president. After World War II, the family opened a furniture and dry goods store in Jasper, run by Gerson and Fannie’s two sons. Ike and Babe May focused the business on furniture. The May family continues to run two furniture stores today. Many of the May family members were civically active in such organizations as the Lions Club, PTA, Red Cross, Arts Council and the Temple Sisterhood. Ike May served on the local Board of Education and as President of the Musgrove Country Club.

Temple Emanu-El
Temple Emanu-El, a Reform synagogue, became the center of Jewish life in Jasper. In April 1922, eight Jewish families purchased a lot on 5th Avenue and 15th street for the purpose of erecting a temple. Walker county and Birmingham Jews joined together with the non-Jewish Jasper community to raise the $10,000 needed to cover the cost of the building. The temple was finally dedicated on June 3rd, 1923. Rabbi Solomon Katz, from Temple Emanu-El in Birmingham delivered the keynote address. Demonstrating the interfaith cooperation that existed in Jasper, several ministers from local churches gave speeches at the Temple dedication. As this involvement indicates, Jasper Jews enjoyed a close relationship with non-Jews in town. In 1955, the congregation purchased land for a Jewish burial site in the Oak Hill Cemetery 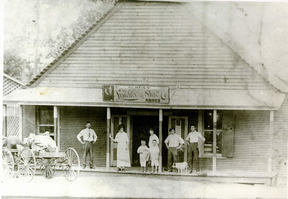 Temple Emanu-El was always a small congregation. During the eighty-three years that the Temple thrived, the congregation never had more than thirty-five member families. Because of its small size, the congregation relied heavily on the volunteer work of its members. The Sunday school was named after Sonia K. Newmark, who conducted the school for over thirty years. Although there were never more than ten children enrolled, some of her students traveled from towns outside of Jasper such as Empire and Carbon Hill each Sunday morning to attend the school. In solidarity with the new State of Israel, each session of Sunday school ended with students singing "Hatikva," Israel’s national anthem.

The Temple Emanu-El congregation was never big enough to afford a full-time rabbi but many student rabbis had long-term relationships with the congregation. Over the years, Hebrew Union College in Cincinnati sent rabbinical students to lead services for the High Holidays. Rabbis at Birmingham’s Temple Emanu-El assisted the Jasper community with lifecycle events such as weddings and burials. When the congregation did not have a student or visiting rabbi, lay readers led the service, which took place every Friday night. Services regularly ended with a patriotic song like “God Bless America” or “America The Beautiful.” 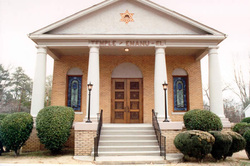 The temple Sisterhood was a vital part of the congregation and made many important contributions to the Jewish community in Jasper. Despite its small size, the Sisterhood was responsible for fundraising for youth programming, operating the Sunday school, maintaining the building, and giving to charities. Every year the Sisterhood hosted a Holland flower bulb sale to raise money for these projects. Such charitable work was not confined to the Sisterhood. The Jasper Jewish community was recognized for being the most generous per capita in the United Jewish Appeal campaigns. Their small numbers made the Jewish community seem like one large extended family. One congregant remembers calling all adults by “aunt” or “uncle.” Joe Engel, son of founding member Ike Engle, was the temple treasurer for seventy years. He was remembered for walking the streets of Jasper in the early days of the synagogue in order to collect fifty cents from various merchants for monthly dues. Joe’s wife, Reva, taught Sunday school for many years.
The Jewish Community in Jasper Today 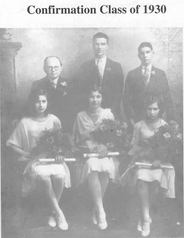 The Jewish population of Jasper peaked at 140 people in 1937. Since then, the size of the community has slowly shrunk. In 2005, the congregation decided to disband and sell their synagogue. In a town where most Jews had been merchants, large-scale chain stores were threatening business. The changing retail industry, combined with outward migration, caused the Jasper Jewish community to diminish in recent years. The remaining members have merged into Temple Emanu-El in Birmingham. The Jasper room in Temple Emanu-El in Birmingham is reserved for Jasper’s Jewish community artifacts, including the stained glass windows that had adorned their building in Jasper. The Jews in Jasper sadly watched as their synagogue of eighty-three years closed its doors but were grateful to continue their relationship with the Jewish community in Birmingham and to ensure that their community’s legacy would be preserved.