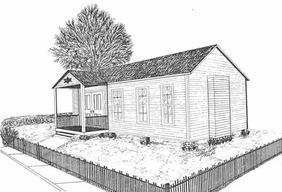 Just as people flocked to California in the 1849 for the Gold Rush, they came to West Blocton in the 1880s for the coal rush. Between 1880 and 1900, Bibb County’s population doubled as a result of mine development in the Cahaba basin. Coal attracted many immigrant groups who settled in West Blocton to work in the mines which produced high grade coal for the railroad companies. The “beehive” coke ovens that baked the coal can still be found in West Blocton, located about forty miles southwest of Birmingham. West Blocton was closely linked with its larger neighbor as the coke made there helped fire Birmingham’s steel industry.

The Jewish immigrants who followed the miners into West Blocton first arrived in the 1880s. These Russian immigrants were merchants who helped fuel the commercial economy of the town with many of them starting as peddlers before opening their own dry goods stores.
Stories of the Jewish Community in West Blocton
Early Settlers
William “Wolf” Israel, considered to be the patriarch of the Jewish community in West Blocton, opened a clothing and furniture store in 1890 after he emigrated from Russia with his wife and six children. When Israel retired in 1916 and moved to Birmingham, his son Samuel Israel and son-in-law Isaac Nathews took over management of the store and renamed it after their initials—I & N Quality Store. Nathews had begun as a traveling clothes salesman who lived as a boarder in Wolf’s house before he became co-owner of the store.
Organized Jewish Life in West Blocton
At its peak, about twenty Jewish families lived in West Blocton. As early as 1892, Jews were gathering together to hold services. The wedding of Israel Kronenberg and Annie Israel, West Blocton’s earliest recorded Jewish ritual, occurred in 1896 with Rabbi Roseberg of Birmingham officiating. By 1905, West Blocton Jews had founded a congregation which they curiously named “Ah Goodies Ah Chem,” a phonetic spelling of “Agudas Achim,” which means League of Brothers. Merchants Wolf Israel, John Krentzman, and Samuel Israel were the congregation’s organizers. That same year, the group built a modest wood frame structure on Main Street as a synagogue. Built for $1,500, the synagogue consisted of a sanctuary and a classroom where children received Hebrew lessons. In 1927, Samuel Israel’s children built a tennis and basketball court behind the building, which was maintained by the Israel family over the years for use by neighborhood children.

Israel was long a central figure in the congregation’s history. When he was only twenty years old, he wrote the original bylaws of the congregation. These rules reflected the complex balance between maintaining Jewish traditions and adjusting to life in rural Alabama. They clearly laid out the duties of the shochet, who, in addition to slaughtering kosher meat, was responsible for many of the duties of a rabbi, like teaching Hebrew school, leading services, and taking care of the synagogue. Showing regard for the secular world and assimilation, the bylaws stipulated that Hebrew classes were not to conflict with public school hours. All records of the congregation were mandated to be written in English, though debate in Hebrew was permissible. The bylaws also detailed the obligation off all members to visit sick members. The congregation was required to hold services in the synagogue for the week following the death of a member to observe the traditional mourning period. While many of the congregants came from Orthodox backgrounds, men and women sat together in the sanctuary, though there was a table in the back of the sanctuary where the older women preferred to sit.

Although Jews worked to fit into the local culture, their religious customs could cause trouble. Samuel Zeidman, who served as shochet for the congregation, bought ceremonial wine in Birmingham for the congregation in 1910, storing it in his house. Since Bibb County was dry during those times, someone warned Zeidman that his house might be raided in the middle of the night for violating the prohibition law. Fearful of getting in legal trouble but not willing to sacrifice his religious observance, Zeidman and his family soon left West Blocton for Kentucky.

Although West Blocton’s Jewish community was always small, the congregation held regular weekly services until World War I. The congregation drew Jews from other small towns in the area, including Brent, Centreville, and Abernant. By the 1920s though, the Jewish community had dwindled and only a few families were left in West Blocton. Young men from University of Alabama in Tuscaloosa would help boost attendance and complete a minyan. ​ 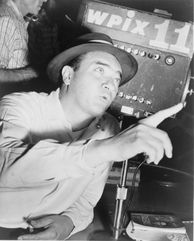 Mel Allen and Elmo Ellis
Wolf Israel’s grandson Melvin Israel would bring his Kappa Nu fraternity brothers with him to West Blocton for the High Holidays. Melvin Israel later became Mel Allen, “the voice of the New York Yankees,” a Hall of Fame baseball broadcaster on both television and radio. His father Julius had grown up in West Blocton. Allen’s cousin Elmo Israel, later changed to Ellis, was also in the radio business, becoming known as the “voice of WSB” in Atlanta.

​Allen and Ellis both began their radio careers inside the I & N Quality Store. A homemade radio station was fashioned with a stand-up microphone, a public address system, and an old cabinet radio which stood outside the store. A continuous story, similar to a soap-opera, was broadcast on Saturdays to passersby. The stories were written, produced, and performed by Ellis, his older brother Frank, Mel Allen, and some of their friends. Frank Israel also became a professional radio announcer under the name Don Frank. 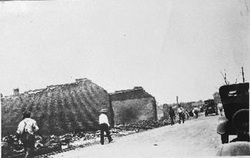 A Community in Decline
In 1927, a town fire destroyed I & N, though it was later rebuilt and withstood the Great Depression. The store would last as the final remnant of the Jewish business community in West Blocton until 1970. The Jewish community declined significantly by the time of the economic crisis. Only fifteen Jews lived in West Blocton in 1937. By 1935, all services in the synagogue had ceased. A storm blew the building off its foundation sometime in 1936; it was later torn down. After the storm, Sam Israel held services in his home during the High Holy days and during Passover until his death. The religious artifacts of the congregation were given to Birmingham’s Knesseth Israel Congregation.
The Jewish Community in West Blocton Today 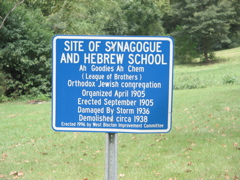 Today there are no physical remnants of Ah Goodies Ah Chem. The synagogue lot is overgrown with no trace of the building that once stood there, but the Jewish presence in the town has not been forgotten. Isaac Krentzman is remembered for serving on West Blocton’s first city council. Sam Israel’s picture hangs in the Masonic Lodge on Main Street across from a picture of Jesus Christ. In 1997, the West Blocton Improvement Committee dedicated a historical marker at the former site of the synagogue. The event was attended by local citizens and more than thirty of the former Jewish residents and their children. Jews may no longer inhabit West Blocton, but their legacy remains.