Overview >> Florida >>  Fort Walton Beach
Overview
Once home to complex Native American mound-building culture, the land that is now Fort Walton passed through Spanish, British and (debatably) pirate occupation in the late 1700s and early 1800s, before the establishment of Camp Walton as a Confederate outpost. The Army abandoned the site in 1862, and in 1940 the census counted only 90 residents at the former Fort.  Most at this time came to the area drawn by the development of the Valparaiso Airport, established by James E. Plew in 1933 for the purpose of boosting the region’s economy, and providing space for the Air Corps Tactical School. In 1937 the Airport acquired a new name—Eglin Field, growing into the Eglin Air Force Base, which, along with a beachside tourist industry, drew residents to Fort Walton throughout the 20th century. In 1941, the state of Florida officially incorporated Fort Walton.

What began as a handful of Jewish families worshiping at the Eglin Air Force Base and in nearby Pensacola developed throughout the late 20th century into an established Jewish community of transplants, military affiliates, and retirees. Efforts to form an organized Jewish life began with the Okaloosa County Jewish Brotherhood’s founding of a Jewish Community Center in 1978 and the subsequent development of Temple Beth Shalom in 1985.
Early Jewish Life 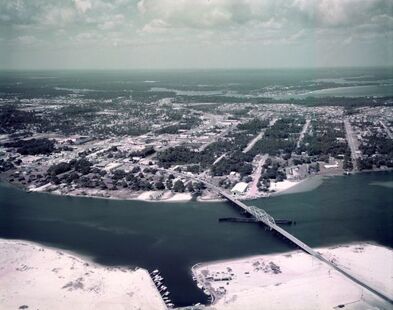 Aerial view of downtown Fort Walton Beach, 1950s. State Archives of Florida.
In 1950 Erwin Fleet moved to Fort Walton to begin his law practice, feeling that he had received a “message from the man upstairs” to join the community. Fleet recalls one Jewish family living in Fort Walton at the time—Sam and Bessie Kirsch, who he describes as being local merchants. One of the Kirsch’s sons, Herbert, owned several stores in the area around Navarre—west of Fort Walton—in the 1950s and 1960s. In 1951, as Erwin prepared to serve in the Korean War, he and his young bride left Fort Walton. They returned in 1952 with their infant son, and in 1953 Fleet’s parents moved to the city to open the General Merchandise Store on Main Street. The Fleets reflect a Fort Walton trend of familial following, either of parents following children or vice versa.

The Eglin Air Force Base operated as a vital center of early Jewish life and, along with tourism, a defining part of the Fort Walton economy. In 1963, Rabbi Fred Lewin took the position of Jewish Chaplain and began a tradition of involvement with the Jewish community beyond Eglin. That same year his wife, with the Jewish Women of the Chapel Sisterhood at Eglin Air Force Base, directed a “Back to School” fashion show, and Rabbi Lewin threw Eglin’s first Purim party. In 1978, after a period of layled services, Marvin Labinger assumed the role of Eglin’s second Jewish Chaplain.  Labinger understood his importance to the Fort Walton Jewish community, stating that even though he was not a “civilian Rabbi,” he worried about local Jews “slipping away” without access to Jewish resources. He vowed he would do his part to provide services to the area, even to those with no military affiliation.

The presence of the Eglin Federal Prison Camp increased the Base’s status as the focal point of Fort Walton Jewish life. Dubbed “Club Fed” in the 1980s, this white-collar prison was known for its laid-back policies and strong religious programming, including those for its sizable Jewish population. Congregants recall prisoners’ spouses flying in from New York and New Jersey on the weekends, bringing bagels and lox to the Oneg after Shabbat services. Rabbi Labinger was an advocate for the provision of kosher food upon request, a victory he won in 1981. Marvin Mandel, the former Governor of Maryland arrested on political corruption charges in 1977, served nineteen months at Eglin before President Ronald Reagan commuted his sentence.
​
In the early 1970s, twenty-three charter members formed the Okaloosa Jewish Community Brotherhood. Initially, the Brotherhood held meetings in private homes or in the recreation room of a local apartment facility. Up until this point, Fort Walton Jewish families often attended services at the Eglin Air Force Base, and carpooled to bring their children to Sunday school in Pensacola. As more Jewish families moved to town, either in association with the base, to take advantage of the tourism industry, or to open private practices in law or medicine, the Jewish community thought about establishing a space of their own. In 1978, a Dr. Shielder donated the land for the current building. The Brotherhood took over the title, dedicating the Okaloosa County Jewish Community Center that same year.
A Place To Worship:  Community Center to Temple Beth Shalom
In its early years, the Okaloosa County Jewish Community Center operated as a catch-all space for religious, cultural and educational programming. Non-Jewish groups could rent the building, and over the years the Community Center hosted yoga classes, bridge clubs, and a pet show, along with Jewish holiday celebrations and lay-led services.

​By 1985, community members desired a formal worship space, in part due to the need for more religious schooling for Jewish children in Fort Walton. Thirty-three families chartered Temple Beth Shalom, establishing the congregation in the now-former Okaloosa County Jewish Community Center. The Temple’s original members included a handful of lay leaders, who spearheaded services until 1986, when the congregation took in its first student Rabbi. In 1989, Betsy Torop became the first female student Rabbi to serve the region, and from 1994 to 1999 Rabbi Mitchell Smith became the congregation’s first and only resident Rabbi.

In 1988, the congregation added an educational wing to the building, doublings its size, and then building on once more in 1998. Moe Hersh became the first President at the time of Temple Beth Shalom’s founding, followed by David Litwack in 1986. Hersh served an import role in supporting the “Kosher Car Affair”—Temple Beth Shalom’s annual fundraiser. Hersh rallied his friends to buy tickets to win a Cadillac or cash prize and brought them to celebrate at a post-raffle feast of non-kosher foods. 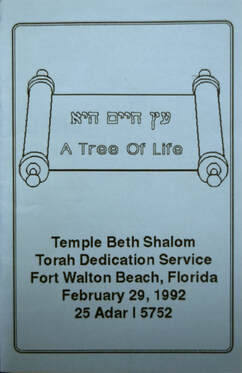 Program for a Torah Dedication Ceremony, 1992. Courtesy of Temple Beth Shalom.
At first, the congregation used a Torah on loan from Congregation Adath Jeshurun in Louisville, an agreement arranged by charter member Irvin Cohen. In the 1990s, Temple Beth Shalom obtained two permanent Torahs—one, a Holocaust rescue from Ledeč, Czechoslovakia, purchased by the Sandler family in 1992, and the other found in a Judaica store in Lower Manhattan and transported to the Panhandle by Robert J. Horowitz.

Temple Beth Shalom has always operated as a Reform congregation, becoming a member of the Union of American Hebrew Congregations in 1985. Yet the congregation historically accommodated those from diverse Jewish and non-Jewish backgrounds, a necessity being the only congregation serving their community. One example is their use of prayer books, which are conducive to a service that mixes Reform and Conservative traditions, namely by using a greater portion of Hebrew.  In the Jewish section of the Beal Parkway Memorial Gardens Cemetery, dedicated in 1988, non-Jewish spouses are allowed to be buried with their Jewish loved ones, provided they go through Jewish burial rituals.

The Fort Walton community generally embraced Jews before and throughout the development of organized Jewish life in the city, with a few obstacles along the way. Erwin Fleet recalls his religious background being used against him when he ran for Circuit Judge in 1958. His opposing candidate told the press that he was a “Jewish member of the Hebrew faith,” intending to integrate the Fort Walton schools. At the time, the city’s superintendent opposed integration, but Erwin recounts how the military presence in the community forced the superintendents’ hand. Since military affiliated students received additional federal funding for attending local public schools, all the federal government had to do was threaten to withdraw this funding if schools did not integrate. Another congregant recalls an instance of anti-Semitism, in which swastikas were drawn on the Temple building.
​
However, other examples point to acceptance. In 1972 two local chefs—Carol Singleterry and Tom Birk of Imperial Seafood Restaurant—orchestrated a Hanukkah feast of gefilte fish and herring, matzah ball soup and latkes for their Jewish regulars, who did not usually have local access to “Jewish foods.” In 1991, Temple Beth Shalom participated alongside other “churches” in hosting a Community Thanksgiving Service at the First Methodist Church. A 1991 letter “From the Prez” references the Thanksgiving service both as a good way to draw a crowd, and a benefit to being involved in Fort Walton’s broader religious community.
Conclusion 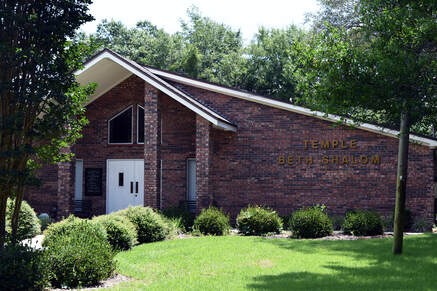 Temple Beth Shalom, 2018.
As of 2018, Temple Beth Shalom boasts eighty-five member families, a far reach from the thirty-three families that chartered the congregation in 1985. The religious school teaches fifteen to twenty Hebrew school participants, aged “five to Bar Mitzvah,” and the congregation welcomes student Rabbis throughout the year, though they have revived interest in the search for a resident Rabbi. From a handful of Jewish families in the 1950s to an influx of military affiliates, retirees and other non-native Fort Walton citizens throughout the late 20th-century, the Jewish community has grown to support an active Sisterhood and Hadassah, alongside the Brotherhood, and the 2018 summer calendar is populated by services and studies, meetings and mens’ breakfasts. Erwin Fleet, one of the area's longest-standing Jewish community members and founding Brotherhood member, still sits on the Board of Temple Beth Shalom.