Overview >> Kentucky >>  Bowling Green
Bowling Green: Historical Overview
While Bowling Green, Kentucky, has a long history, going back to its founding in 1798, the record of its Jewish community is much less substantial. Although Jews have lived in Bowling Green since the mid-19th century, only in recent years have they established a formal congregation.
Stories of the Jewish Community in Bowling Green

1921 ad for Pushin's Department Store
Early Jewish Settlement in Bowling Green
Located on the Barren River, Bowling Green flourished in the early 19th century with the coming of steamboat traffic and later the railroad. After the Louisville & Nashville Railroad built tracks through the town in the 1850s, the small settlement thrived. It was in the years just after the Civil War that Jews first settled in Bowling Green in significant numbers. Not much is known about this early community. According to a notice published in the American Israelite newspaper, 40 Jews lived in Bowling Green in 1873. That same year, they purchased land for a Jewish cemetery adjoining the Protestant and Catholic burial grounds. At a cost of $500, this purchase was a substantial investment that indicated a confidence in the development of the Bowling Green Jewish community.

This confidence was misplaced, as Bowling Green Jews did not end up using the cemetery. There is no trace of it today. Most likely it was sold once the Jewish community failed to develop. This early Jewish community did not establish a formal congregation, although they were holding High Holiday services around the turn of the 20th century according to the American Jewish Year Book. These efforts ceased by 1907.

A Small Community
Despite the lack of an organized Jewish community, a few Jewish merchants had settled in the town by 1900. Hyman Pushin left Lithuania in 1885, and had opened a clothing store in Bowling Green by 1900. He did not remain in town for long, moving to Danville in 1906, where he opened a department store with his brother Harry. Yet another Pushin, Sam, followed Hyman to Bowling Green in the early 1900s after having spent time in Henderson. In 1905, Sam Pushin owned the Red Lion Store, which sold clothing and dry goods. Later, his brother Joseph joined him and the business became known as the Pushin Brothers Department Store. In 1940, Sam and his son Abe Pushin ran the business. Later, Louis Pushin, probably a nephew or cousin, took over the store, operating it until it finally closed in 1978. Another Jewish merchant family in Bowling Green was the Greenspans. Brothers Louis and Adolph Greenspan, who were natives of Austria, owned the Bazaar Dry Goods Store by 1900. Later, their brother Sego joined the business. The family ran the store until it closed in 1937.

By 1937, only 39 Jews lived in Bowling Green and they still had not yet established a congregation. Nevertheless, there is an indication that they had an informal religious school. The Kopel family, who lived in nearby Glasgow, Kentucky, sent their children to Bowling Green in the 1930s for Sunday school. Yet there is no evidence that Bowling Green Jews held services during this period, and the Kopels would travel to Nashville for the High Holidays. Most likely, the few Jewish families in Bowling Green also traveled to Nashville for worship.
The Growth of Bowling Green
In the 1960s, Bowling Green grew tremendously after Interstate 65 was built through town. New industry was drawn to the area, including a General Motors Corvette Assembly Plant. The development of Western Kentucky University, which had been founded as a state normal college in 1906, also fueled this growth. Bowling Green soon became the largest city in southern Kentucky with a population of 59,000 people by 2011.

In the 1970s, a handful of young Jewish families moved to Bowling Green, many of whom were affiliated with Western Kentucky University. Most of these faculty members did not stay in town very long, often moving on to other academic posts. There were still a few Jewish-owned stores downtown at the time, but these old-timers had little interest in forming a congregation. The last of these stores closed in the 1980s. Between the decline of Jewish retail stores and the high turnover among Jewish university faculty, there was little impetus to establish a formal community, as most Bowling Green Jews went to Nashville for services and religious school.

The first newsletter of the Shalom Fellowship
A Congregation Forms
In 1999, a congregation of Messianic Jews was founded in Bowling Green, which attracted attention in the local newspaper. When the resulting article failed to make the distinction between the new congregation and genuine Judaism, local Jews realized that they needed a more formal presence in the community. Soon after, they established the Shalom Fellowship. In the group’s first newsletter in May 1999, founding president Margaret Friedman-Vaughan mentioned that six local Jewish families had been meeting together informally for monthly services during the previous two years. But “given recent events with the messianic group in Bowling Green, we believe it is time to move forward and formalize our relationship with some branch of Judaism.” Soon after, the group joined the Reform Union of American Hebrew Congregations although members came from a variety of Jewish backgrounds.

The purpose of the group, which later changed its name to Congregation Am Shalom (People of Peace), was to promote Jewish religious observance and education. According to its founding bylaws, a central goal of the congregation was “to promote the fundamental and enduring principles of Judaism and to ensure the continuity of the Jewish people.” The group initially met in members’ homes. By 2001, 18 families belonged to Am Shalom, though most members also belonged to congregations in Nashville or Owensboro as well. There has been discussion about acquiring a synagogue, but their small numbers and a lack of interest has prevented this. Over the years, the congregation has rented space at various churches, where it has held regular services and events.

From its beginning, Am Shalom’s services were lay-led, though there was an effort to bring in regular visiting rabbis from Nashville’s two Reform congregations in 2001. This plan fell through after only a few visits. Retired Nashville rabbi Randall Falk did visit Bowling Green that same year to speak on the topic of “Living Jewishly in a Non-Jewish World.” The congregation started to bring in student rabbis from Hebrew Union College in Cincinnati, though the expense soon proved to be more than the small congregation could bear. In 2001, there was a short-lived effort to establish a religious school, but many parents preferred to drive the 65 miles south to Nashville each weekend so their children could go to Sunday school at a large congregation. By 2002, Am Shalom met for lay-led services each Friday night at the local Unitarian Church. They did not hold High Holiday services, as members generally preferred traveling to Nashville for more formal rabbinic-led worship. In 2004, past congregation president Bryan Carson and his wife Gayle Novick donated a Torah to Am Shalom.

Over the years, Am Shalom has held public programs designed to educate the larger community about Judaism. In 2004, they built a community sukkah at the city’s International Center. The following year, they held a public menorah lighting in Fountain Square Park. This function of the congregation was best articulated by Bryan Carson in a congregational newsletter in 2003, in which he wrote that Am Shalom was needed “for our neighbors – so they will know what a Jewish person is.” They also hoped that having a formal congregation would encourage more Jews to move to Bowling Green and fewer to leave in search of greater Jewish opportunities. 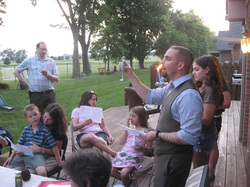 ISJL Rabbi Marshal Klaven leading Havdallah services for Am Shalom.
Am Shalom has had mixed success in achieving these goals. The congregation has not grown much. After reaching a peak of about 35 families in its early years, Am Shalom has since shrunk. In 2012, there were about 15 families, fewer than when it was founded 13 years earlier. The congregation is no longer as active as it once was. While they had met for weekly services in the early years, recently they stopped holding regular Shabbat services due to lack of attendance. They still meet for special events and holidays, like the annual community seder and the Hanukah and Purim parties. They also hold High Holiday services led by a cantorial soloist from Nashville. While there are about a dozen children in the congregation, most go to Nashville for religious school. The ISJL has sent a visiting rabbi to the community at least once a year since 2009, to provide support to the community.
The Jewish Community in Bowling Green Today
While the future of the Bowling Green Jewish community is unclear, the presence of the university and the local medical center will likely ensure that at least a small Jewish population will remain in town. The small number of Jewish students at WKU has been growing, and they reorganized the campus Jewish organization in 2011 – an earlier group had been founded in 2005 but later became inactive. By 2012, the small campus group was holding regular Shabbat dinners. It remains to be seen whether Bowling Green will ever develop into a viable, organized Jewish community or will continue to be a distant satellite of the Nashville Jewish community.