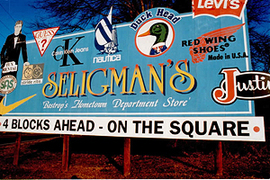 A Community Forms
Although Jews had lived in the area since the 1840s and 1850s, it was not until they organized a congregation decades later that they began to practice Judaism collectively. Fourteen families founded Congregation B’nai Sholom in late 1877 when they purchased a piece of land on which a small schoolhouse stood. In the next six months, the congregation purchased land for a cemetery, organized the Ladies’ Hebrew Benevolent Association, and founded a B’nai B’rith Lodge. Charles Wessolowsky, a representative of the Jewish South newspaper and the B’nai B’rith, traveled through Bastrop in June 1878 and observed that “here the banner of B’nai B’rith has been planted and a prosperous and good working Lodge is in existence.” He also observed that the Ladies’ Hebrew Benevolent Society of B’nai Sholom worked diligently to assist their fellow Jews, “performing its charitable function to a great extent, and many poor Israelites who…are of late frequent visitors at Bastrop have received their due aid, their wants alleviated by the purse of these noble women.”

Over the next five years, the membership at B’nai Sholom doubled as they planned for the construction of a new synagogue. The schoolhouse property, which had served as a de facto temple since the congregation’s inception, was raffled off in May 1885. Mrs. Edelia Goldman bought the winning ticket, but under Louisiana law, “married women could not buy property without the consent and authorization of her husband or, in his absence, by the Judge.” As her husband was traveling in Europe at the time of the raffle, the judge issued her the deed to the property. The new synagogue was constructed soon thereafter on a donated plot of land at the corner of Walnut and Washington Streets. At its dedication, Rabbi Bien of Vicksburg, Mississippi, Judge J. Harvey Brigham of Bastrop, and congregation president Abe Oehlber delivered laudatory speeches. The handsome brick temple served as a meeting place for the Jews of Bastrop for the next 40 years. 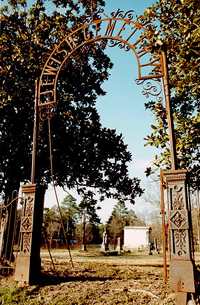 The Community Declines
Unfortunately, by the 1920s, the community that the Jews of Bastrop had spent the last half-century fostering had begun to deteriorate. The state had constructed a gravel road, today’s State Route 139, between Bastrop and Monroe, a much larger city 20 miles away. In the early 1920s, many members of Bastrop’s Jewish community moved into Monroe to pursue new and exciting economic opportunities. Those who stayed behind in Bastrop were unable to sustain B’nai Sholom. By 1923, the congregation disbanded and the approximately 30 Jews left in Bastrop joined B’nai Israel in Monroe. Furniture and moveable items in the abandoned temple were divided among former members of the congregation. The stones in the sanctuary bearing inscriptions of the Ten Commandments were buried in the Jewish cemetery to prevent desecration. In 1939, the temple was at last demolished after a paving dispute had led a local court to order that the abandoned property be sold. Most remains of B’nai Sholom and its history were discarded; however, the two pulpit chairs from the sanctuary have been preserved in the Snyder Museum, an institution dedicated to preserving the history of Morehouse Parish.

A Small Jewish Presence
Despite Bastrop’s absorption into Monroe’s geographic periphery, between ten and 12 families still resided in Bastrop after the end of the Second World War. They had all joined B’nai Israel in Monroe, but they also organized an informal Sunday school and held an occasional Friday night service either at their homes or in the Bastrop courthouse. Charles Snyder and Ferdinand Wolff cared for the cemetery, now a handsome and verdant two-acre property with approximately 50 burials. Today, the Jewish cemetery is cared for by Morton Levy, one of Bastrop’s few remaining Jews. Among the cypress trees and magnolias that flank the gravestones lies an impressive mausoleum for the Wolff family. The florid inscription on the tomb bears as much testament to the family’s memory as it does to that of Bastrop’s Jewish community: “I will cherish thy memory as long as I live and this image shall forever live in my heart.” 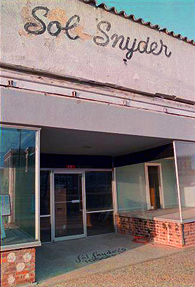 Jewish Businesses in Bastrop
Around the turn of the 20th century, Jews founded several important businesses in downtown Bastrop. August Leopold, son of German immigrants, arrived in Bastrop after growing up in New York City. He opened a dry goods store in the 1890s and soon thereafter opened a downtown saloon famous for serving “whiskey that wouldn’t freeze,” implying that the proprietor had not diluted the alcohol. This claim was verified during one particularly cold winter when his competitor’s whiskey froze while his own supply remained potable. August’s reputation as an honest businessman paid off; in later years, Bastrop’s citizens elected him as the town’s sheriff. Other Jews operated large retail businesses in Bastrop. Charles Snyder, a Russian immigrant who arrived in Bastrop in the early 1890s and peddled for several years, opened a department store in Bastrop’s commercial center, the courthouse square. He also operated Snyder’s Thrift Store adjacent to his department store. His three sons, Samson, Sol, and David, each owned their own stores. David Snyder’s furniture store proved to be one of the most successful in Northeast Louisiana. By 1950, stores operated by members of the Snyder family occupied three of the four sides of the courthouse square. Unfortunately, all of these businesses have closed in recent years. Charles Snyder’s home in Bastrop’s residential district now houses the Snyder Museum, which was named in his honor. 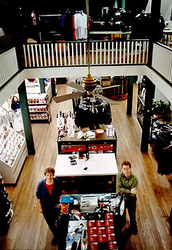 Another immigrant, Jacob Seligman, opened a small department store in nearby Bonita after giving up on a coffin business. He sold an array of goods, including furniture, appliances, hardware, and men’s and women’s clothing. In 1910, his son Hyman took over the store at the age of 17 and by 1923 opened a second location on Madison Street in downtown Bastrop. Four years later, Hyman purchased an old movie theater at the corner of Franklin and Jefferson Streets and Seligman’s Department Store moved into its present location. Hyman’s son Jacob Seligman and his two brothers-in-law, Joseph Schendle and Maurice Raphael, operated the store after the end of World War II. Seligman’s at that time had opened stores in nearby towns, including Columbia, Jonesboro, Winnsboro, and Hamburg. The Seligman family sold the store in 1988 to another Jewish couple that had recently arrived in Bastrop: the Israels. New owner Ron Israel represents the reverse trend in Jewish migration. After having started out working for major corporations in large cities such as Los Angeles and Atlanta, he left it all behind and took on the challenge of operating a small business in a small town. Today, Seligman’s provides Louisianans with the same high quality of products and service that it has been providing for over a century. As the oldest retail business in Morehouse Parish and the last bastion of its rich Jewish history, Seligman’s continues to be known as “Bastrop’s Hometown Department Store.”
The Jewish Community in Bastrop Today
While there is no congregation or organized Jewish community in Bastrop today, the influence of Jews on its development is still felt today.