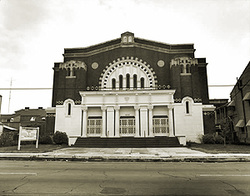 The Orthodox presence in New Orleans dates to the middle of the 19th century, when Jewish arrivals from Eastern Europe began to settle in the city. They brought little with them, except for their traditional Orthodox practices and a determination to recreate their close-knit communities in a foreign land. Many of the arrivals to New Orleans settled in the Dryades Street neighborhood, six blocks of two story row houses stretching along Dryades from Howard to Jackson Avenue. Subsequent arrivals settled alongside friends and family from the old country, and the neighborhood quickly evolved into the nexus of the New Orleans Orthodox Jewish population. By the late 1800s, a visitor walking down Dryades Street would smell the aromas of Eastern European dishes wafting from the humble residences and would hear colorful Yiddish expressions exchanged outside the numerous Kosher delicatessens, butchers and bakeries.

In 1858, the earliest arrivals from Poland and Prussia established an Orthodox congregation, named Tememe Derech, or “The Right Way.” The congregation soon became known as simply “the Polish Congregation.” As Jews from other Eastern Europeans regions began to arrive, they tended to congregate with their fellow countrymen, and establish services in accordance with local traditions.  By the end of the 1800s, the Dryades Street neighborhood contained a number of small regional congregations, including the Galitzeaner congregation Chevra Thilim, a Litvak congregation Chevra Mikve Israel, and a Lithuanian Chasidic congregation named Anshe Sfard. These smaller congregations met in private homes and rented spaces and often had just enough attendees for a minyan, a quorum of ten members.

Over time, the nuances of specific regional divisions gradually softened, and in 1904 a number of the small congregations, social aid organizations, and an early burial society merged with Tememe Derech, to create a single Orthodox Congregation, named Beth Israel. The new congregation commenced holding services in a building on the 500 block of Carondelet Street while raising funds for permanent synagogue. Members elected David Rosenson to serve as Beth Israel’s first president. Rosenson had immigrated from Russia in 1899 along with his wife and four children. Perhaps his experience moving halfway across the world with a family of six inspired his interest in luggage, for upon his arrival in New Orleans he established himself as a valise maker. By 1910, he owned a suitcase factory, which he managed along with his son Jacob. At the time of his presidency at Beth Israel, Rosenson lived near Beth Israel’s meeting space on Carondelet, but by the 1920s, after achieving success in manufacturing, Rosenson moved his family further uptown to a home on Josephine Street.

After meeting in rented spaces, the congregation soon began raising funds to acquire a permanent place of worship. Although the Orthodox residents of the Dryades Street neighborhood generally maintained limited contact with the more socially established Reform Jews living a few blocks away along St. Charles Avenue, Beth Israel’s fundraising effort afforded an opportunity for cooperation between the groups. On January 13, 1905, Beth Israel President I.L. Haskel published an appeal to the whole Jewish community in the Jewish Ledger newspaper, stating: “The Orthodox Jewish community of our city is without a suitable place of worship … we appeal to Orthodox and Reform alike … wherefore we all should help us establish and Orthodox Synagogue worthy of its name and worthy of the generous community in which we live.” The Reform community responded generously, and later that year Beth Israel moved into a Spanish plantation home at 1616 Carondelet once owned by a former mayor of New Orleans, Joseph Shakespeare. A mere two years after signing the congregation’s charter, Beth Israel inaugurated the new synagogue in time for the 1906 High Holy Day services.  In 1924, they tore down the house and built a beautiful new synagogue on the same site.

During the early 1900s, the numerous small Orthodox groups consolidated into three congregations, all large enough to purchase permanent houses of worship. In addition to Beth Israel, the Galitzeaner synagogue Chevra Thilim built a small synagogue nearby at 826 Lafayette Street in 1915 and the Lithuanian Congregation Anshe Sfard purchased a small building in 1900 at 1309 South Rampart.

These early decades of the 1900s marked a golden era for the Dryades Street neighborhood. Many of the new arrivals worked initially as peddlers, based out of dry good stores owned by more established neighbors. Their territories often included underserved parts of the town, including the poorer black neighborhoods. Others worked as butchers or in the New Orleans shipyards, or as tailors, coopers, clerks, laborers, bookkeepers and merchants. The members of the Orthodox community used their increasing economic success to support a broader range of congregational functions and reinforce a vibrant Jewish presence in the neighborhood. In 1915, Beth Israel congregants helped establish the “Talmud Torah” or “Communal” school at the corner of Clio and Josephine Streets. The daily afternoon Hebrew classes attracted members of both the Reform and the Orthodox Jewish communities. According to some accounts, in the 1920s, the Jewish population of Dryades Street reached an estimated 3,500 inhabitants. 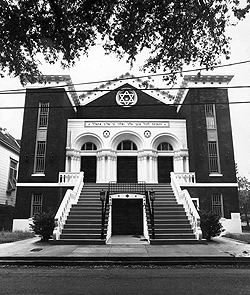 The financial prosperity enjoyed in the 1920s allowed congregants to build larger houses of worship. In 1925, members of Congregation Anshe Sfard built a large new synagogue at 2230 Carondelet that still stands today. In 1924, Beth Israel built an ornate and imposing synagogue at the site of their original building. The large Byzantine structure featured a seating capacity of 1200 and flourishes such as hand carved Stars of David in the ceiling, a large imported chandelier, and stained glass windows. At the dedication on Sept. 12, 1924, Rabbi Henry Raphael Gold of Boston came to speak, and was so impressed that he ended up staying as the congregation’s rabbi. In 1926, Gold expanded Beth Israel’s reach by establishing the Menorah Institute, the educational, social and cultural arm of the congregation. Housed in a separate building, the Menorah Institute provided a fully Orthodox alternative to the Communal Hebrew School and housed auxiliary prayer services, which earned the building the name “The Little Shul.”

Beth Israel continued to grow through the 1930s, under the leadership of Rabbi Uri Miller. Membership expanded to approximately 350 families and the congregation added cemetery properties, founded a nursery school, and established a junior congregation.

The same economic success that contributed to the vibrancy of the Dryades Street neighborhood ultimately precipitated its demise, as the children of the East European immigrants gradually moved uptown, into the Lakeview area, and to neighboring suburbs. Following World War II, the three Orthodox congregations all suffered from reduced membership as more and more of their congregants left the neighborhood. In 1948, Chevra Thilim build a new synagogue further uptown, at the corner of South Claiborne and Jena Streets, a move that encouraged increasing numbers of Jewish families to make the move uptown. In 1963, Beth Israel purchased a property in the Lakeview neighborhood, at 7000 Canal Boulevard. Congregants celebrated the new building’s formal dedication in 1971. Anshe Sfard remains the only Orthodox congregation still operating in the Dryades Street neighborhood, albeit with a significantly diminished membership and range of communal functions.

In the 1950s, the rise of Conservative Judaism and innovations introduced to traditional ritual practices led to serious disagreements among the congregants of Chevra Thilim. In 1955, the Chevra Thilim Board of Directors voted to introduce mixed seating, a move adopted by some traditional congregations across the country. Two weeks later, thirty nine members of the congregation, led by Harry Katz, brought a suit in the Civil District Court for the Parish of Orleans. The plaintiffs claimed that by introducing mixed seating, the board of directors had violated the precepts of halacha and therefore violated the congregation’s charter to worship in “the Orthodox Polish Jewish tradition.”

After a lower court ruled in favor of Katz, the case eventually made its way to the Louisiana Supreme Court.  The Chevra Thilim disagreement was not an isolated event in the Orthodox Jewish world; at the time of Katz vs. Singerman, the subject of mixed-seating in Orthodox congregations sparked controversy and confusion in congregations across the country. Many Orthodox Jews from around the country carefully followed the proceedings and considered it one of the first major tests of mixed-seating innovations. A number of these people even took an active role in the Chevra Thilim case. 27 Orthodox rabbis from around the country filed affidavits before the Louisiana Supreme Court affirming that mixed seating “is not contrary to Orthodox Jewish forms and ceremonies.” Katz and his team produced a list of 75 affidavits and presented many witnesses testifying that it was. The Louisiana Supreme Court eventually overturned the lower court’s decision, and determined that despite the introduction of mixed seating, “Congregation Chevra Thilim and the defendants here continue to profess to worship God according to the Orthodox forms and ceremonies.”

Although the court ruled in favor of allowing mixed-seating within the Orthodox congregation, the issue remained far from settled among congregants. Following the case, the congregation split.  The members advocating mixed seating ultimately left Chevra Thilim, and founded New Orleans’ first Conservative congregation, Tikvat Shalom. Soon after the case, the question of mixed seating in Orthodox congregations evaporated as separate seating emerged as a definitive and necessary element of Orthodox prayer services. Following the case, Chevra Thilim remained Orthodox and preserved separate seating, but continued to lose members as families moved away from the neighborhood. Chevra Thilim eventually did adopt mixed seating, but still could not stave off the membership attrition. In 1999, the two congregations reunited and formed Shir Chadash, a Conservative congregation with traditional leanings.

Today, Shir Chadash, Beth Israel, and Anshe Sfard continue to serve more traditionally minded New Orleans Jews, along with two different Chabad Houses.  Hurricane Katrina flooded Beth Israel’s synagogue in Lakeview, destroying its Torah Scrolls and most other religious artifacts.  Rising above this devastation, Beth Israel has begun to meet in the chapel at the Reform Gates of Prayer congregation in Metairie.  They have acquired a home in the area to be used by their new rabbi Uri Topolowsky and are working to build a new synagogue.  Orthodox Judaism in New Orleans has often been overshadowed by the larger Uptown Reform Temples.  Maintaining traditional practice in a city known for its treyf seafood and carefree attitude has often been a challenge, but these traditional congregations continue to persevere.