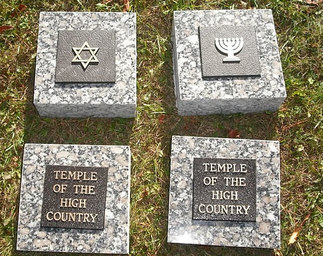 Photos courtesy of Ruth Etkin
In 1974, a small group of Jewish college professors at Appalachian State University, led by history professor Sheldon Hanft, began to meet together informally. Prompted by a Charlotte-based circuit-riding rabbi program that served small Jewish communities in North Carolina, the group met initially in people’s homes. Later, the group, which officially named themselves the “Boone Jewish Community,” moved to a building in downtown Boone. Over the last few decades, the congregation has met at local churches, including the Unitarian Church for many years and most recently St. Luke’s Episcopal Church.

From its early days, the group expanded in the summer as Jewish retirees from Florida came north seeking to escape the heat of the Sunshine State. These so-called “halfbacks,” (since they were traveling half-way back from Florida to their original hometown of New York City), brought a new if intermittent vitality to the Boone Jewish Community. While weekly Shabbat services would attract a crowd in the summer, it was often hard to get a minyan during the winter. Also, most of these retirees already belonged to a congregation in Florida, so many had little interest in establishing a more formal congregation in Boone.

This growing Jewish “halfback” population brought a strong demand for Jewish cultural life. In the 1990s, a group of Jews on nearby Beech Mountain, led by Ed and Molle Grad, founded a cultural havurah, which they named “Havurah of the High Country.” During the summer months, the havurah meets every three weeks for lunch and a cultural program on Jewish music, art, history, or philosophy. Most havurah members also belong to the Boone congregation. 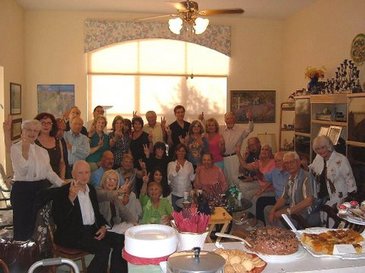 Florida meeting where members voted in favor of building a synagogue
​In the 21st century, the Boone Jewish Community has grown as an increasing number of retirees have been drawn to the area. In 2009, the congregation had about 130 members. In addition, the year-round Jewish community grew as well, to between 15 and 20 families. While a few were faculty at Appalachian State, most were local business people. While the congregation is not affiliated with any national movement, members use the Reform prayer book during their lay-led services even though many of the retirees are from more Conservative or Orthodox backgrounds. Peter Cohen, a professor of religion at Clemson University, usually leads the High Holiday services, which can draw as many as 250 people, especially if they are early in the year and retirees are still in Boone at the time.

​Appalachian State also benefited from this growing local Jewish population. In 2000, the school brought Elie Wiesel to speak on campus. In the wake of his visit, the school started a Holocaust Studies Program which has since become the Center for Judaic, Holocaust, and Peace Studies. Martin and Doris Rosen endowed an annual symposium that includes training about Judaism and the Holocaust for school teachers from various states and even a few from Eastern Europe, who receive subsidies from the U.S. government to attend.
Appalachian State has an active Hillel program serving the approximately 100 Jewish students at the university.

2008 was a momentous year for the Boone Jewish Community. Bonnie and Jamie Schaefer, who own a spa in the area and split their time between North Carolina and Florida, offered the congregation $1 million to build a synagogue. Some members were worried about the rising financial obligations of a building and were apprehensive at the prospect. In a congregational meeting held in February 2009 that took place in two locations, Boone and Boca Raton, the members voted to accept the gift and move forward with additional fundraising for a synagogue. As befitting a congregation with a building, they also voted to change the group’s name to “Temple of the High Country.” Later in 2009, the group held a fundraising concert featuring Marvin Hamlisch that raised $45,000 for the building fund.
The Jewish Community in Boone Today
Boone, with its growing number of golf courses and gated communities, continues to attract well-heeled Jewish retirees. With the construction of the Schaefer Jewish Community Center, the Boone Jewish community had its first permanent home in the “Chai Country.”