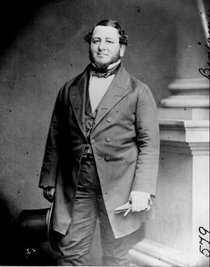 Judah P. Benjamin lived in Fayetteville
between 1815 and 1822
Early Settlers
​An article in the Fayetteville Observer states that “the history of the Jewish people of Fayetteville and Cumberland County finds its beginnings very nearly coincident with the founding of the county itself.” Jewish tombstones lie within a Jewish cemetery dating back to 1812. Famed Jewish Confederate leader Judah P. Benjamin, who later served as Secretary of State and War in the cabinet of Jefferson Davis, lived in the city between 1815 and 1822. But aside from these few vestiges of Jewish life, no evidence suggests a real Jewish community emerged in antebellum Fayetteville.

Throughout the 19th century, Jews lived in Fayetteville but their numbers remained modest. The city was severely damaged by General Sherman during the Civil War but rebounded and grew tremendously afterward. Reconstruction and the New South era brought new industry and institutions to Fayetteville, including pioneering centers of African American education. In 1867, the Howard School was established, which later became Fayetteville State University. Still, by 1878, there were only 52 Jews recorded in the town.

Over the next few decades, Jews would play a pivotal role in the city’s economic development. The first skyscraper in Fayetteville was a department store owned by the Russian-born Stein brothers. It was opened in 1916, four years after Kalman Stein and his brother Jacob formed The Capitol Department Store. Kalman Stein ran the business until 1940 when his son J. Bernard Stein, took over. J. Bernard Stein became a prominent business and philanthropic leader in Fayetteville. In 1909, Hyman Fleishman established B. Fleishman and Brothers department store on Market Street. Like the Steins, the Fleishman enterprise became a mainstay in the business world of Fayetteville. 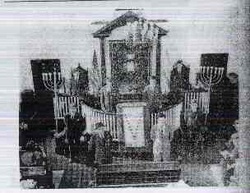 Interior of Beth Israel's 1st synagogue
Organized Jewish Life in Fayetteville
In 1910, the Jewish families of Fayetteville formed Congregation Beth Israel. Previously, Jewish families had met informally in homes for religious services. They now met in the McKeithan Building on Market Square with the guidance of a lay leader. Over the next decade, the members of the congregation became increasingly determined to build a permanent house of worship. In 1917, the membership was incorporated and set about raising funds for the construction of a synagogue. The congregation moved to the Stein-Bridge building and the fundraising committee, led by Morris Goldberg, eventually collected $18,000. The Ladies Aid Society played a central role in the fundraising effort. Fannie Stein, Kalman Stein’s wife, was the founder and longtime president of the Ladies Aid Society, which was affiliated with Hadassah. Also crucial were the efforts of local businessmen Jacob Stein and Hyman Fleishman, who would become the temple’s first president. On May 22, 1922, Beth Israel’s synagogue on Cool Spring Street was completed.

From its beginning, Beth Israel was an Orthodox congregation. The synagogue was built within walking distance of the congregant’s homes and included a mikvah (Jewish ritual bath). The congregation hired a series of shochets (kosher butchers), who also usually led services as best they could. Beth Israel also did not have an ordained rabbi until 1943 when the congregation hired Rabbi Charles J. Shoulson, a graduate of an Orthodox seminary. According to a contemporary history of the community, after Rabbi Shoulson’s arrival, services and the Hebrew School were “reorganized along more modern lines.” He also set up an adult bible study class.

Anti-Semitism in Fayetteville
Rabbi Shoulson confronted anti-Semitism in Fayetteville in lectures for local civic groups and weekly radio addresses. In 1944, one article claimed that “It should be stated incidentally, that the Jewish population in Fayetteville has always enjoyed cordial and friendly relationships with their non-Jewish neighbors.” Still, some Fayetteville Jews have noted that they faced a degree of social exclusion. Monroe Evans, a longtime member of Beth Israel, states that, Jews “were segregated…We weren’t invited to join certain groups. There were certain places we knew better than to go.”
World War II and the Post-War Era
As the hometown of Fort Bragg, Fayetteville was transformed during World War II. Soldiers poured into the city, and as they came, the Jewish community offered its services. An Army and Navy Committee was formed, led by Harry Stein, which acted as a liaison to the stationed troops. Rabbi Shoulson offered religious services for the Jewish soldiers stationed in Fayetteville. On Passover, a large tent was set up for the Jewish soldiers to celebrate with the local Jewish community. World War II also led to immense population growth in the city. Post-war growth brought an influx of Jews, as the community grew from 175 in 1948 to 480 in 1960.

Beth Israel responded with expanding its presence in the city, building a community center on Morganton Road in 1950 with a large social hall and a kosher kitchen. As more and more members moved to the area around the Beth Israel Center, the congregation decided to move its worship services from their downtown synagogue to the center. They built a new sanctuary and chapel in the Beth Israel Center, which became the home of the congregation. The congregation would periodically need to find new classrooms for its burgeoning number of students.

The Community Grows
By the 1980s, there were 500 Jews in Fayetteville. This growth began to affect the nature of the congregation’s religious service. In 1972, Beth Israel officially became a Conservative congregation and rewrote its laws to give women more rights in religious participation. In the 1990s, women were called for aliyah and were counted for a minyan, and in 2014 the congregation hired their first female rabbi.
The Jewish Community in Fayetteville Today 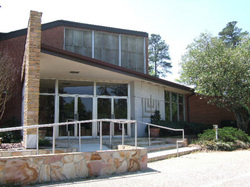