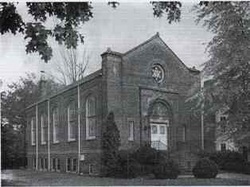 B'nai Israel's 1927 synagogue
Early Jewish Residents
The rapid growth of the furniture industry drew the first Jewish inhabitants. The productivity of the factories was enough to attract Jewish peddlers to sell their wares to the growing number of workers in High Point. The first was Lewis Harris, who arrived in 1894 amidst the massive migration of Jews out of Czarist Russia. While many Russian Jews embarked for large cities like New York or Baltimore, Harris first immigrated to Richmond, Virginia, to meet up with his brother Isaac. He was given needles, pins, fabrics and other petty goods to peddle along the countryside. Still a teenager, Harris arrived by train in High Point only to be arrested for peddling without a license. He was helped by two local women, whose husbands were in the furniture business, and was brought to a boarding house owned by “German John” Rommel. The German-speaking Rommel made sense of Harris’s Yiddish and the newly arrived immigrant was assisted with his room and board, quickly establishing himself as a salesman in the city. Harris successfully peddled throughout Guilford and Randolph counties. Just before the turn of the century, Harris convinced his brother Henry to join him in High Point. A little over a decade later, the two brothers owned their own store and were firmly established in the town.

Their success was due in large part to the expansion of furniture production in High Point, which subsequently brought in new Jewish families. Just after the beginning of the 20th century, the Silver, London, and Rabinowitz families settled in growing city. These pioneer Jewish families retained the traditional Jewish practices of Orthodox Judaism. In 1905, a shochet (kosher butcher), Mr. L.A. Kress, was brought to High Point. The nascent Jewish population must have been noticed by the local Gentile population as revealed in coverage of their activities by the local press. In 1909, the High Point Enterprise reported Jewish observance of “Atomeney Day, the Day of Forgiving” and that “The Hebrews of High Point will celebrate the Fasting Day of Atomeney, which is called ‘Yom Kippur.” Peculiar Jewish practices were discerned with some amusement. The Enterprise also recounted the story of a “Jewish Rabbi” who while retrieving a letter from the post office on Shabbat refused to sign for his delivery. Instead, he retrieved a small boy from the street who was informed to sign for him. The title of the article was “Alright for a Gentile.” 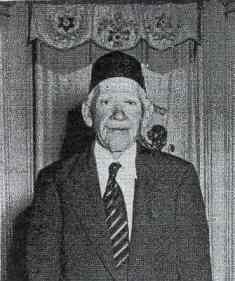 Rev. Elias B. Ershler
Organized Jewish Life in High Point
By 1920, 23 Jewish families lived in High Point. They still gathered together to pray periodically, but did not yet officially form a congregation. David Harris, son of Henry Harris, became the first Jewish birth and later the first bar mitzvah. Willie London became the first Jewish boy to graduate from High Point High School. The first wedding was that of Rosa Silver. Yet for all these occasions the growing Jewish population had no official place of worship. Religious services were originally held in the homes of congregation members, notably Henry Harris. But the increasing number of Jews soon made this impractical. In 1911, services were moved to the Harris Building on Washington Street and to various other spaces later on. But these makeshift locations were only temporary and could not satisfy the Jewish community’s desire for a building of its own.

​ In 1923, High Point Jews established the High Point Hebrew Congregation and began raising money to buy land for a synagogue. By this time, the congregation had already obtained several Torahs and had formed a Ladies Aid organization. The Orthodox congregation also had a daily Hebrew school. Under the leadership of Milton Silver, funds were collected for the acquisition of land on Hamilton Street, eventually costing $20,000. The B’nai Israel Synagogue of High Point was formally dedicated in 1927, the product of the original congregants’ financial contributions and hard work.

B’nai Israel continued the Orthodox tradition of High Point’s first Jewish inhabitants. The congregation’s constitution stated, “The Orthodox Faith of Jewish worship and rites shall always be maintained in the congregation,” including maintenance of a shochet and prohibitions on musical instruments during religious services and mixed seating. Additionally, services were specifically mandated to be in the Ashkinazi tradition. Such guidelines suggest that the founding members of B’nai Israel desired to maintain the practices of their ancestors. Five years after the founding of the synagogue it was reported that the synagogue was “up to date in all particulars at the same time in strict compliance with all the orthodox traditions.”

Between 1927 and 1937, the Jewish population more than doubled from 101 to 210. Jews in High Point were most often proprietors or managers of stores. The Harris and London families were apparel retailers, the Wagger brothers sold shoes, while four Jewish families sold furniture, three owned jewelry stores, and one owned a grocery. Around 4% of the Jewish residents held professional occupations. This low number may be the result of competition with other, larger cities such as Charlotte, Richmond or Charleston, which may have better attracted professional Jews. While there was High Point University, other university centers like Raleigh, Durham or Chapel Hill were more desirable locales for Jewish academics.


Jewish Organizations in High Point
High Point Jews formed an array of Jewish organizations. The High Point Council of Jewish Women was founded in 1933. In addition to acting as a Sisterhood, the Council participated in various charitable activities in High Point, including educational services, work for the homeless, and entertainment every month at the Veterans Hospitable. B’nai B’rith Lodge 1238 served as a social organization for High Point’s Jewish men as well as facilitating community engagement, such as the construction of an infirmary in the local Boy Scout Camp. In 1953, High Point saw the establishment of the Jewish War Veterans of the United States, Aaron Pliskin-Mayer Ginsburg Post No. 675, the only post in North Carolina. The group had 40 members and took part in numerous charitable causes. The Jewish community also organized the Chaplain Alexander Goode Chapter of the Aleph Zadek Aleph, a social organization for young Jewish men as well as its female counterpart, Zariza B’nai B’rith Girls No. 655. Such institutions demonstrate not just non-religious Jewish associations forming in this period but also an acculturation into American forms of community engagement. 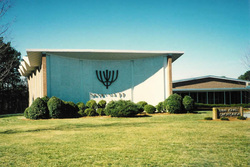 B'nai Israel's 1965 synagogue
Photo courtesy of Julian Preisler
The Community Grows
As the nation endured World War II, the baby boom, and suburbanization in the middle decades of the 20th century, High Point also experienced commercial and demographic growth. As the furniture industry attained its peak production , the Jewish population increased from 215 in 1947 to a peak of 400 in 1960. Due to this growth, B’nai Israel added a youth and education center in November of 1952, which included rooms for Sunday school, a social hall, a library and a study for the rabbi. But by the end of the 1950s, the size of the congregation necessitated even larger changes. The old synagogue and education center were sold as a new lot was purchased on Kensington Road.

​The new B’nai Israel synagogue was dedicated on May 30th, 1965, with the first services held later that month. A temple history describes the ceremony that marked the occasion, which involved “the dramatic removal of the Torahs, the procession of a long line of cars to the new Synagogue…[and] the bringing in of the Torahs under the canopy into the new Safir Torah.” Local media reporting of the dedication ceremony reflected the close ties between Jews and the larger High Point community. While half a century prior, High Point journalists wrote of the strange practices of newly arrived Jews, articles on the new synagogue on Kensington Road mention the presence of business and civic leaders, as well as interviews from prominent Jewish figures. By this time, B’nai Israel had 134 families and 88 children in its Hebrew and Sunday schools.

Around the same time, the congregation shifted to Conservative Judaism. Its 1965 constitution stated, “the worship and rites of this congregation shall be in keeping conservative, traditional ideology recognizing the principles of the shulchon oruch.” The movement from Orthodox to Conservative observance may have reflected the new suburban orientation of the temple. There was also the increased acculturation of B’nai Israel’s American-born members. Such assimilation is illustrated by the annual debutante balls, hosted by the Council of Jewish Women. The brochure for 1959 edition of this traditionally Gentile-celebrated festivity announced that “the last ruffle is in place, the final dress is pressed – and 22 debutants from all over North Carolina have nothing to do now, but wait until April 5 when they will be presented in High Point.” 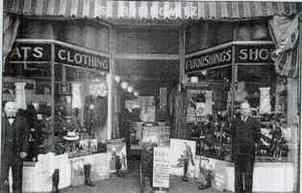 S. Robinowitz store
Changes in the Community
From its demographic peak in the 1960s, the High Point Jewish community began to stagnate. The American Jewish Year Book listed the Jewish population level at 400 from the years 1960 to 1984. Over the last few decades, the Jewish population of High Point has undoubtedly declined as the city’s furniture industry weakened. This economic decline has spurred many Jewish children raised in High Point to move to large metropolitan areas that offer better social and career opportunities. Additionally, the passing of High Point’s first Jews and their immediate descendants has led to the closing of family owned stores. When Jacob Rabinowitz passed away in late 1991, his wife closed their apparel store, which had been started by his father Solomon Rabinowitz. As of 2005, the percentage of High Point Jews who were proprietors or store managers stood at roughly 25%, far lower than historical levels. Meanwhile, the percentage of Jewish professionals has increased to nearly a quarter as well.
The Jewish Community in High Point Today
High Point’s Jewish community is still active and vibrant in the city. B’nai Israel hosts Friday night services, Saturday morning Torah study, and Saturday services. With 72 members, B’nai Israel still runs Hebrew education for High Point Jewish youth and has a National Federation of Temple Youth chapter. In recent years, B’nai Israel has joined the Union for Reform Judaism, finishing the congregation’s decades-long transition from Orthodoxy, to Conservative Judaism, to Reform.

High Point is still a furniture magnet of the South with over 50 furniture retailers. The city hosts the High Point Market in which thousands of visitors purchase some of the best made furniture in the U.S. While there, people can see a city that has been sustained through furniture manufacturing. They can also see a century-old Jewish community that has been integral to High Point’s progress.