Overview >> North Carolina >>  Rocky Mount
Rocky Mount: Historical Overview
Rocky Mount, North Carolina, was first colonized by white settlers in the late 17th century. In 1777, the County of Nash was formed, though, today, Rocky Mount is in both Nash and Edgecombe Counties. Rocky Mount had a gristmill early on and it was not a surprise when the first railroad line came to town. The Wilmington to Weldon line was completed in 1840, and, at the time, was the longest, continuous railroad in the world. Within the next few years, the first Jews came to Rocky Mount.
Stories of the Jewish Community in Rocky Mount 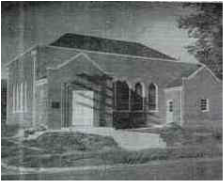 Congregation Beth El's synagogue
Early Settlers
While there may have been earlier Jews in Rocky Mount, the first recorded Jew living there was Lewis Stern, a German immigrant who peddled around the area. As of 1850, he was living in town, but had moved to Wilson by 1853. In December of 1855, Stern sold his wares to a Jewish firm called Odenheimer & Mensenheimer, but by June of 1858, they had closed their business. That same month, H. Micherheimer, also a German Jew, peddled goods in the area with a wagon. There is no record of him ever acquiring a store. By 1871, Prussian merchant Julius Joel lived in Rocky Mount, but by June of the following year, he had moved to Richmond, Virginia. Simon Meyer, a Prussian-born grocer also moved to the area as a young man in the 1870s.

​
​Organized Jewish Life in Rocky Mount
The Rocky Mount Jewish community remained small, without a congregation, though a traveling rabbi and shochet came to the area periodically to slaughter chickens for kosher tables. In the early 1920s, Rocky Mount Jews, led by a group of women, founded Congregation Beth El. Rebecca Epstein, who had moved to the area from Goldsboro, took the lead in establishing the congregation. At first, the congregation met in a room over Bullock Auto Sales, and, later, in the Masonic Hall. Some of the Jews that were living in Rocky Mount at the time were the Simon Breen family, the Isaac Hoffman family, the Eli Epstein family, the Julius Baker family, the I. Louis Sherman family, the Louis Levin family, the Isaac Levy family, and the Isadore Silverman family. By 1926, Beth El had eight member families, and an annual income of only $400. Eli Epstein, a dry goods store owner, was president while D.J. Edwards was vice president. 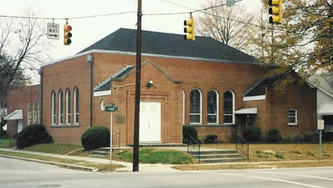 Beth El today.
Photo courtesy of Julian Preisler.
By 1937, 69 Jews lived in Rocky Mount. They had joined the Reform Union of American Hebrew Congregations by 1925, likely in order to get access to student rabbis from Hebrew Union College. After World War II, the congregation had grown large enough to begin building a synagogue. In 1949, they broke ground on the building. Rabbi Maurice Feuer of the Jewish congregation in Goldsboro, North Carolina, officiated at the cornerstone laying ceremony; local Christian ministers also took part in the event. When the modest $30,000 building was finished by Rosh Hashanah in 1949, the congregation, which had 26 members at the time, took possession of the Torah that had previously been used in nearby Tarboro. That year, a student rabbi from Hebrew Union College led High Holiday services in the new temple.

After Congregation Beth El left the UAHC in the 1940s, there was much debate about what movement it ought to affiliate with. Some members wanted to be Conservative, while others wanted to be Orthodox. The congregation ended up with two or three sets of prayer books because, every time they had a new visiting or student rabbi and he wanted different books, they bought more. In the end, Congregation Beth El decided to be Reform and rejoined the Union of American Hebrew Congregations. By 1962, Beth El reached a peak of 38 members and even had a full-time rabbi, Israel Sarasohn.

Anti-Semitism in Rocky Mount
While Jews in Rocky Mount were well accepted in the larger community, in 1988, there were a series of anti-Semitic incidents targeting Beth El. In the fall of that year, vandals broke some stained glass windows at the temple. Around the same time, anti-Semitic graffiti was discovered at the synagogue. No one claimed responsibility and no arrests were made. The president of the congregation, Bruce Chapman, speaking to the newspaper in Wilmington, brushed the incidents aside, saying that these individuals did not speak for the larger Rocky Mount community.
The Jewish Community in Rocky Mount Today
By 1996, the congregation no longer employed a rabbi and had just 15 members. Two teenagers conducted services. Beth El still had education classes for kindergarten through seventh grade, as well as a weekly Hebrew school. In 2001, they were holding services once a month and still had half a dozen children attending the Sunday school. Today, Temple Beth El has 12 members and still belongs to the Reform movement. While most of the children raised in Rocky Mount have moved away to larger cities, Beth El and the Rocky Mount Jewish community continue to persevere.