Overview >> North Carolina >>  Tarboro
Tarboro: Historical Overview
Named for the river on which it’s located, Tarboro emerged as an active inland port town in the 18th century. The growing settlement, which sat at the navigation head of the Tar River, was named the seat of Edgecombe County in 1764, four years after the town was chartered. While Tarboro has a rich colonial history, it did not attract Jewish settlers until just before the Civil War, when the town became linked to national markets via the Wilmington & Weldon Railroad. Many of Tarboro’s Jews came from Richmond, as the North Carolina town was linked to Virginia’s capital through economic and kinship ties.
Stories of the Jewish Community in Tarboro 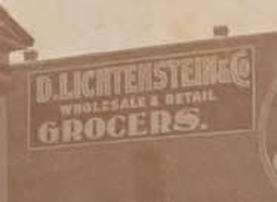 Photo courtesy of Edgecombe Memorial Library
Early Settlers
A few Jewish immigrants from Germany moved to Tarboro in the 1850s. Brothers Jacob and Joseph Feldenheimer, who came to Tarboro from Richmond, Virginia, after earlier emigrating from Wurttemberg, opened a store together before the Civil War. By 1860, Jacob had $3000 in personal estate. Ten years later, Jacob’s wife Rachel ran a millinery shop in town while Jacob was a store clerk. In 1880, Jacob was a merchant while Rachel continued to own her millinery shop. Joseph Feldenheimer owned a dry goods and clothing store in 1880.

It was not until after the Civil War that a significant number of Jews settled in Tarboro. By the 1870s, a handful of Jews had opened various retail businesses in town. Louis Heilbroner, a native of Bavaria, moved to Tarboro in 1868, where he opened a dry goods store. His younger brother Abraham worked in the store and lived with Lewis in 1870, as did Raphael Lang, another Bavarian immigrant. Louis would travel to East Coast cities to acquire merchandise while Abraham ran the store. While successful at first, Heilbroner’s business endured several economic hardships before closing its doors in 1897. The son of Prussian immigrants, David Lichtenstein, who was born in Richmond, Virginia, opened a grocery store in Tarboro in 1874 which grew into a large retail and wholesale operation. Lichtenstein was involved with several other local businesses, including a furniture store, a wholesale liquor business, and the local opera house, which he bought and refurbished in the 1880s. He was very involved in civic affairs, serving on the local school board and the board of aldermen. Lichtenstein retired in 1903 and returned to Richmond, and later moved to New York City. 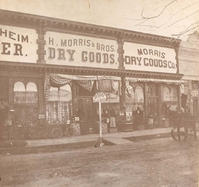 Photo courtesy of Edgecomb County Memorial Library
Henry Morris, who was born in England and raised in New York, moved to Tarboro in 1869 from Richmond, Virginia and opened a dry goods store. His brothers William and Joseph lived with him and worked in the store. H. Morris & Bros. became a big success, eventually doing $60,000 in business each year. The brothers later opened branch stores in Greenville and Washington, North Carolina. Reflecting the acceptance that these Jewish merchants enjoyed, Henry Morris served several years as mayor of Tarboro in the 1880s.

Unlike Morris, some of these immigrants did not set down deep roots in Tarboro. German immigrants David and Sara Steinglanz arrived in the 1870s, with David opening a grocery store and Sara working as a milliner. When David’s business went bankrupt, they moved back to Germany. Tragically, their daughter Theresa, who had been born in Tarboro, perished in the Holocaust. 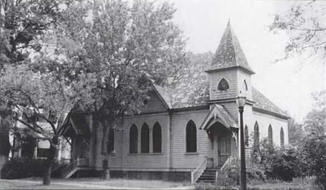 B'nai Israel's synagogue.
Photo courtesy of Edgecombe County Memorial Library
Organized Jewish Life in Tarboro
By 1875, the Jewish community of the area was large enough that a group of men founded a B’nai B’rith lodge with members from nearby towns like Greenville, Washington, Rocky Mount, and Enfield. Henry Morris was the lodge’s president while Lewis Heilbroner was its treasurer, a very important position for an organization whose primary purpose was to provide sickness and death benefits to its members’ families. The lodge held annual fundraising masquerade balls for Purim that drew Jews from around the region and coverage in the local press. Tarboro Jews would also periodically hold grand balls. One, held in 1889, started at 10 PM and went until 3 AM. The ball-goers enjoyed a “handsome supper” at 11:30 and returned to dance to the sounds of a “colored string band.”

In 1877, Tarboro Jews established Congregation B’nai Israel, which met in the clubhouse rooms used by the B’nai B’rith lodge. Several of the founding members, including Henry Morris, Philip Whitlock, and Gerson Zander, had been among the early members of the Orthodox congregation Keneseth Israel in Richmond, Virginia. B’nai Israel quickly acquired a Sefer Torah and set up a Sunday school to educate the children. Despite the Orthodox background of some of its founders, the board of B’nai Israel moved to adopt Reform Judaism in 1882. Two years later, the congregation dedicated its rented meeting space as a synagogue and contacted Rabbi Isaac Mayer Wise in Cincinnati to secure the services of a Hebrew Union College student to lead services during the High Holidays. Tarboro Jews also established a YMHA chapter that sponsored social and literary programs. In 1894, young Jews in town founded the Aguilar Literary Circle, which met every week to discuss literature and current events.

In 1878, a Tarboro Jew reported on the progress of the local Jewish community to the Jewish South newspaper. According to this correspondent, there were 35 Jewish adults and 25 children living in Tarboro at the time. There were 11 Jewish-owned stores, three of which were large clothing stores. The community was close-knit as Jews socialized together, often gathering to listen to Sarah Whitlock sing. There were a number of marriages between the few Jewish families in town and those in surrounding towns. Sol Lipinksy of Asheville married Eva Whitlock, while David Lichtenstein married Hannah Zander. The writer’s one complaint was the lack of Jewish women, and he beseeched the “charming, beautiful, and accomplished young ladies” who might be reading his letter to visit Tarboro.

The Community Grows
In the late 19th and early 20th centuries, growing numbers of Jewish families from Russia and Germany settled in Tarboro. Most of them opened dry goods or clothing stores on Main Street. The concentration of Jewish-owned stores was so great in downtown Tarboro that a local newspaper once referred to the two blocks of Main Street as “Little Jerusalem” in the 1870s. By the 1880s, perhaps as many as 100 Jews lived in Tarboro. Many of these newcomers were Yiddish-speaking Orthodox Jews. Brothers Jake and Samuel Levy came to the U.S. from Russia in 1902 and 1903 respectively. By 1910, they owned a dry goods store in Tarboro. Philip Shugar came to America from Lithuania in 1911; in 1917, he opened Shugar’s Department Store in Tarboro. Rather than founding their own congregation, these new immigrants joined B’nai Israel, which moved away from Reform Judaism. The congregation had briefly joined the Reform Union of American Hebrew Congregations in the late 1890s, but soon disassociated from the group in the early 1900s.

Despite their small numbers, the members of B’nai Israel, who had been meeting above Joseph Zander’s store, began to raise money for a permanent home for the congregation. They received support in this endeavor by the Ladies Aid Society of Atlanta. In 1897, B’nai Israel dedicated its first synagogue with a capacity crowd. Several non-Jews attended the ceremony and heard keynote speaker Rabbi Edward Calisch of the Reform congregation Beth Ahabah in Richmond. According to the local newspaper report, “the synagogue itself is a credit to the few who built it…That the untiring efforts of a few may accomplish wonderful results is plainly demonstrated by the success of those who aided in building their present structure.” The wooden structure had an impressive sanctuary with stained glass windows. Joseph Zander served as lay reader for the small congregation. By 1907, B’nai Israel had only 15 members, 12 students in the religious school, and an annual income of $100. B’nai Israel’s worship was still somewhat traditional, with lots of Hebrew in its Shabbat services, though the congregation gradually moved away from traditional practices over the next several decades.
The 20th Century
By the early 20th century, many Tarboro Jews had become a part of the town’s economic elite, building large mansions along Main Street. Through the first half of the century, Jewish stores continued to dot Tarboro’s downtown. The Kaufman, Rosenbaum, Lichtenstein, and Adler families owned stores in Tarboro well into the 20th century. Richmond-born Michael Kaufman owned a clothing store in town. One of his ads from 1903 proclaimed that Kaufman had just returned from New York with new merchandise. Indeed, Jewish stores were often perceived as being more cosmopolitan and having more fashionable merchandise. In 1925, the Rosenbloom-Levy Company had a fall fashion show and musical evening at the Tarboro Opera House with famous New York Metropolitan soprano soloist Dicie Howell. This mix of cosmopolitanism and commerce likely set Jewish merchants apart from Gentile store owners in Tarboro.
The Jewish Community in Tarboro Today
The Jewish community of Tarboro remained rather small in the 20th century. At its peak, there were perhaps 10 Jewish families in Tarboro. An estimated 50 Jews lived there in 1907; by 1937, only 30 Jews remained. By the 1940s, the congregation had become largely defunct as most Tarboro Jews began to worship at the larger congregation in nearby Rocky Mount. Their synagogue fell into disrepair by the late 1950s, and was torn down in the 1970s. A stained glass window from the synagogue is currently on display in the chapel at the Albemarle nursing home. By 2000, only two Jewish families remained in town. The last Jewish-owned store, Adler’s Department Store, closed in recent years. Today, Tarboro’s Jewish community, which was featured in the 2000 exhibit “Migrations: Jewish Settlers in Eastern North Carolina,” is largely confined to history.