Overview >> North Carolina >>  Wilson
Wilson: Historical Overview
Wilson, North Carolina, was born in the wake of the Wilmington-Weldon Railroad, which came through the unincorporated area in 1840. Nine years later, the state assembly approved the creation of Wilson, merging the small villages of Hickory Grove and Toisnot Station. In 1855, the assembly created Wilson County and named the eponymous town its seat. The railroad was Wilson’s economic lifeline as no major river flowed through the county. From the 1860s to 1880s, cotton was the leading staple crop for the area, and more and more local farmers moved away from subsistence agriculture to grow the cash crop. By the 1880s, local cotton growers. dealing with depleted soil and increased competition from farmers in the Deep South, moved to a new cash crop: tobacco. Tobacco has shaped the local economy ever since.Possessing the perfect climate and soil for the leafy plant, Wilson flourished economically, becoming known as “America’s Largest Tobacco Market” by 1920.

Wilson’s emergence as an agricultural market and processing town led to the arrival of Jews. The Jewish community began in the late 19th century and endured through most of the 20th.
Stories of the Jewish Community in Wilson 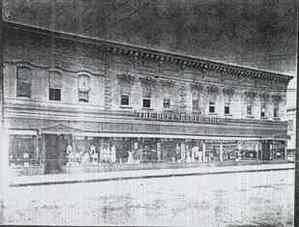 Oettinger's - the Dependable Store
Early Settlers
The first Jews to settle in Wilson were the brothers Henry and Leopold Oettinger, who opened a store in Wilson in 1860 after emigrating from Wurttemberg. Swept up in the Civil War, Leopold volunteered to fight with a local Confederate regiment and died in battle in 1862. After the death of his brother, Henry Oettinger moved to Washington, D.C. Although the two brothers remained in Wilson for only a few years, other family members soon followed as the Oettinger name remained well known in Wilson for well over a century.

Henry sold his Wilson business to Emil Rosenthal, a Bavarian immigrant who had married Eva Oettinger, either a sister or cousin to Henry and Leopold. Rosenthal had started out as a peddler in Raleigh and Greenville, North Carolina. By 1860, Rosenthal was a Greenville merchant with $8000 in personal estate. In 1863, the couple moved to Wilson and bought the Oettinger business. Five years later, Rosenthal’s store burned when a fire swept through downtown Wilson. He soon rebuilt a new brick structure to house his growing business. Rosenthal was very successful. By 1870, he owned $8000 in real estate and $22,000 in personal estate. Rosenthal was well respected in town, serving multiple terms on the city council. He was initially appointed to the position by the Reconstruction authorities, but was later elected by the public in 1870 in the town’s first postbellum election. The local newspaper wrote about him in 1867 that “we do not know a more trustworthy and agreeable tradesman.” Rosenthal gained a local reputation for charity. Once, when someone’s house burned down, Rosenthal donated $20 to the family and encouraged other Wilson citizens to follow suit.

While Rosenthal was in Baltimore on a buying trip in 1869, he convinced his nephews Abraham and Jonas Oettinger to come back with him to Wilson and work in the store. Although Jonas was only twelve years old, their parents agreed, and the Oettinger brothers moved to Wilson, living with their Uncle Emil Rosenthal and working in his store. Abraham later moved to Kinston, where he opened his own store. When Rosenthal moved to Goldsboro in 1882, he sold the business to Jonas and his brother David Oettinger, who had been a clerk in a cousin’s store in Goldsboro since he was 14 years old. The brothers married two of Rosenthal’s daughters, who were also their cousins. They renamed the store J&D Oettinger, which became a successful business in Wilson. By 1885, it was doing $50,000 worth of business and employed four people aside from the Oettinger brothers. David died tragically in 1899, after which Jonas’ son Elmer joined the business.

Jonas and Elmer Oettinger expanded the business into Oettinger’s – The Dependable Store, one of the largest department stores in the area. When they opened a new expanded store in 1916, the local newspaper covered it as front page news, calling the department store “modern,” “metropolitan,” and “a veritable playground of wonderment.” Jonas Oettinger became an important civic leader in Wilson, serving as the first president of the local Chamber of Commerce. He also served on the local school board and the State Sanatorium Board. Oettinger enjoyed remarkable acceptance in Wilson; he was elected to several terms as president of the Wilson Country Club, where he ensured that Jews were welcomed as members. In 1919, the local newspaper called him “an ideal town builder” and wrote that “the city of Wilson has had no citizen more progressive, more highly esteemed…than Mr. Jonas Oettinger.” When he died in 1936, an estimated 1000 people attended the funeral, including U.S. Congressman John Kerr. Elmer ran the Dependable Store after his father’s passing. Elmer’s son David Oettinger continued to operate the store into the 1970s.

Despite the prominent role the Oettingers played in Wilson, they seem to have had little connection with the small Jewish community in the town. By the 1920s, a growing number of Eastern European Jewish immigrants had opened stores in Wilson, yet Jonas Oettinger and his family did not play a role in the creation of Wilson’s Jewish congregation. Jonas did donate a portion of the Oettinger family cemetery for use as a Jewish community burial ground in 1920. According to Elmer Oettinger Jr., the family did not regularly observe Jewish traditions, but Rabbi Edward Calisch of Richmond, Virginia came down to Wilson to officiate at the funeral of Albert Oettinger, Jonas’ son, in 1925. When Jonas died in 1936, rabbis from Raleigh and Goldsboro officiated at the funeral ceremony. The Oettingers, who were native-born and well assimilated by the early 20th century, had little interest in the Orthodox worship of their fellow Wilson Jews.
Organized Jewish Life in Wilson
A wave of Eastern European Jews led to the significant growth of the Wilson Jewish community. By 1927, an estimated 140 Jews lived in town. Most were involved in retail trade. Among these was Morris Barker, who moved to Wilson in 1907 and opened a dry goods store. His five and dime general merchandise store in Wilson quickly became successful; according to a local business directory, Barker’s success was due to the fact that “he treats his customers right, and sells them the right kind of goods at the very lowest prices obtainable in the city.”

Barker, like most of the other newly arrived Jewish immigrants in Wilson, was religiously Orthodox. In 1921, Barker and other Wilson Jews founded the Hebrew Mt. Zion Congregation. Soon after the congregation’s creation, Barker brought back a Torah from New York for the group to use. By 1921, the congregation had ten members. Barker was its president, while Frank London, another Russian immigrant who owned a dry goods store in town, was its secretary. Although the congregation was small, it had a significant annual income, $2500, which enabled it to hire a spiritual leader. In 1921, S. Katzin led services and taught the religious school, which had 15 students and met five days a week. Apparently Katzin did not remain in Wilson very long. For the rest of its history, Wilson’s Jewish congregation did not have a full-time rabbi. Over the years, they were served periodically by rabbinic students and visiting rabbis. Rabbi Edward Calisch from the Reform congregation Beth Ahabah in Richmond, Virginia would occasionally visit Wilson as part of his circuit-riding work.

The congregation met in private homes and rented rooms until 1953, when the group, now known as Temple Beth El, dedicated its first synagogue. Rabbis Solomon Herbst of Goldsboro and Mordecai Thurmond of Rocky Mount took part in the dedication ceremony, as did Reverend Murphy Williams, the head of the Wilson County Ministerial Association. Rabbi Arthur Lelyveld, the national director of the Hillel Foundation, gave the keynote address during the ceremony and at the dedication banquet held that night at a local hotel. Mayor John Wilson addressed the members of the congregation during the dinner. With its new building, Temple Beth El entered an especially energetic period. The congregation had an active Sunday school and a joint Sisterhood-Hadassah chapter. Bar mitzvah ceremonies were regular occurrences at the temple during the 1950s and 60s. Beth El brought in visiting rabbis for the High Holidays, and were also regularly visited by the circuit-riding rabbi who served congregations in the Carolinas. While the congregation was originally Orthodox when it was founded in 1921, it gradually moved toward Reform, though it never affiliated with the Union of American Hebrew Congregations.
The Mid-20th Century
The Jewish community of Wilson flourished in the mid-20th century. When the temple was dedicated in 1953, there were about 25 Jewish families in Wilson, most of whom owned retail businesses in town. Brothers Leon and Morris Leder came to Wilson in 1934 to open a branch of the Leder Brothers Department Store, which had started in Whiteville, North Carolina in 1925 and later grew to as many as 21 different stores in the Carolinas. Leon’s sons Sheldon and Steve remained in Wilson to run the store. Other Jewish merchants in Wilson during the 1950s and 60s included Minnie Switzer, who owned a ladies clothing store, her son Sidney Switzer, who owned a men’s clothing store, Joe Strauss, who owned the Jewel Box store, Irving Mink, who owned the Star Credit Store, which catered primarily to Wilson’s black population, Joe Barshay, who opened a women’s clothing store in 1938, and the Barker and Oettinger families, who continued to run their stores in Wilson. 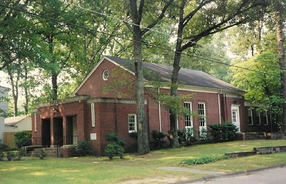 Photo courtesy of Julian Preisler
The Community Declines
Over the last several decades of the 20th century, the Jewish community of Wilson went into decline, even as the city itself has experienced tremendous growth, increasing from 23,010 residents in 1950 to almost 50,000 in 2007. Wilson’s growth has been due to the rise of such local industries as pharmaceuticals, automotive parts, and building supplies. This economic boom has occurred at a time when most of the Jewish children raised in Wilson in the 1950s and 60s left the retail businesses of their parents and entered the professions in larger cities. In the later decades of the 20th century, several of these Jewish-owned stores have closed, including Oettinger’s Dependable Store and Barker’s. In 1995, Barshay’s, which had moved from downtown Wilson to the Parkwood Mall, closed its doors after 57 years in business. Siblings Barbara and Hyman Barshay decided to close the business due to increased competition from larger chain department stores and discount stores. As of 2009, the only Jewish-owned retail store still open in Wilson was the Leder Brothers Department Store, run by Steve Leder.
The Jewish Community in Wilson Today
Due to declining numbers, Temple Beth El decided to close its doors in 1997. The congregation disbanded, and the synagogue was sold as a residence. The few remaining Jews in Wilson, including the Leder and Barshay families, began attending services 20 miles away in Rocky Mount. Proceeds from the sale of the Wilson temple went into a trust fund which has been used to support the Rocky Mount congregation. After the synagogue closed, its two Torahs went to Temple Beth Or in Raleigh, which is experiencing dramatic growth as Jewish professionals are attracted to the Research Triangle area. The contrasting fates of Raleigh and Wilson reflect the demographic trends that have reshaped the Jewish South over the last several decades.