Overview >> Tennessee >>  Winchester
Winchester: Historical Overview
Winchester lies at the northern base of the Cumberland Plateau in south Central Tennessee, 80 miles south of Nashville and 70 miles northwest of Chattanooga. Franklin County was formed by the Tennessee legislature in 1807, and three years later Winchester was established as its county seat. Winchester lies in a rich farming area drained by the Boiling Fork Creek and the Elk River. Since Winchester was the main market town for the surrounding prosperous agricultural area, many mercantile businesses were established in the county seat.

Small numbers of Jews lived in Winchester throughout the 19th and 20th centuries.
Stories of the Jewish Community in Winchester 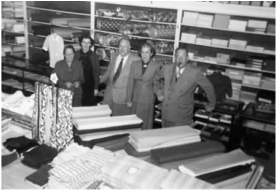 Paplanus Department Store, c. 1945
Jewish Residents
The first known Jews in Winchester were Herman and M. Nassauer who advertised ready-made clothing in the March, 1856, Winchester Appeal newspaper. The Nassauers had been born in Germany and had been in business in Fayetteville, Tennessee, prior to moving to Winchester. Sometime before 1867, the Nassauers moved to Nashville. During the Civil War, in 1863, according to the Army Bulletin, H. Silverberg, “suitor for the 3rd Indiana Cavalry” opened a clothing store in town.
​
In the first half of the 20th century, a handful of Jewish merchants opened stores in Winchester, though most eventually moved away. On August 1, 1913, Sam Paplanus and his son, Isidore, in a wagon drawn by two horses, moved to Winchester with a small amount of stock they had saved from their store that had been destroyed by fire in Lynchburg, Tennessee. Sam had been in Lynchburg since 1890. Sam and Isidore opened a Winchester department store which remained in business until 1954. Isidore’s first wife, Stella Cohen from Meridian, Mississippi, died in 1920, leaving him to raise their daughter Charlotte Jeanne (Dreifuss). With his second wife, Fannie Garber, from Columbia, Tennessee, he had a son, Samuel Harris, and a daughter, Reita Anne (Franco). In 1957 Isidore and Fannie moved to Columbia. In the late 1920s Isaac Paplanus, an uncle of Isidore, came from Selma, Alabama, to Winchester along with his wife, Helen, and his sons, Sander and Edwin. Isaac owned and operated a clothing store until 1931 when he sold it and moved to Cleveland, Ohio. 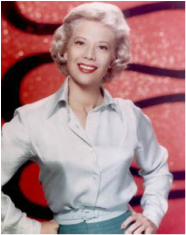 Dinah Shore
In 1908, Solomon Shore, who had been born in Russia, arrived in Winchester and opened a clothing store. He would remain in Winchester until 1924 when he moved with his wife, Anna, and two daughters, Bessie (Seligman) and Fanny Rose, to Nashville. Fanny Rose began singing with radio station WSM in Nashville and changed her name to Dinah. By 1949, Dinah Shore was a radio star, and she came to Winchester for the Franklin County Fair. It was at the fairgrounds that Dinah introduced the song “Dear Hearts and Gentle People” which she dedicated to the people of Winchester and which became one of her trademark numbers. Several years later a major Winchester street was renamed Dinah Shore Boulevard. Shore went on to have an illustrious career in music and television, hosting several talk shows.
​
Abe Sanders, a nephew of Solomon Shore, moved to Winchester from Montgomery, Alabama, in 1922. He went into the clothing business in partnership with Louis Flimin who had come to Winchester from Fayetteville, Tennessee. In 1924, the firm of Flimin and Sanders bought the Shore Department Store. The next year the partnership was dissolved and Louis Flimin opened his own ready-to-wear store. In 1937 Louis Flimin retired and moved to Monroe, Louisiana with his wife and their daughter Sadie. Abe Sanders continued to run the Shore Department Store until 1945. 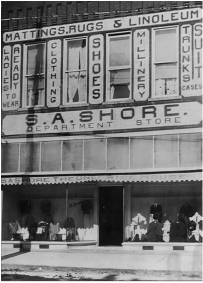 S.A. Shore Department Store
In 1957 the Sanders family moved to Los Angeles. When their daughter, Marjorie, died in 1992, her will established the Estelle, Abe, and Marjorie Sanders California Foundation and the Estelle, Abe, and Marjorie Sanders Tennessee Foundation. The latter foundation supports Winchester and Franklin County charities in perpetuity. The California Foundation established two endowed chairs in cardiac research and surgery at Cedars Sinai Medical Center and the UCLA Johnson Cancer Center in Los Angeles.

In 1943 Ed and Marian Levant Weisman came from Nashville and opened a women’s clothing store. They remained in business until 1955 when they moved to Coral Gables, Florida.

Despite this population turnover, Jews played an important role in Winchester’s economic development. In 1935, Isidore Paplanus and other business leaders formed the Winchester Development Corporation to try to bring jobs to Winchester during the Great Depression. A result of this effort was the Sotsky and Gerrard Clothing Factory. Irvin Sotsky and his family had come from Louisville, Kentucky. After several years the business closed and the Sotskys returned to Louisville. 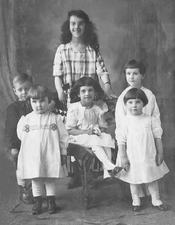 Children gathered for Fanny Rose Shore's 4th birthday.
Jewish Life in Winchester
During the buildup before World War II, Camp Forrest was established 15 miles outside of Winchester. A number of Jewish soldiers were stationed there and some of their accompanying families lived in Winchester. The small indigenous population of Jews freely welcomed these newcomers into the preexisting small social group. The Winchester Jews were active supporters of the Jewish USO associated with the camp.

There were never enough Jews to support a Jewish congregation in Winchester. Most of the Winchester Jews were members of Nashville Jewish congregations, though their attendance was usually limited to the High Holy Days. A few Jewish children, including the two youngest Paplanus children, commuted to Nashville on weekends to attend religious school at the Vine Street Temple and were confirmed there.
​
Between 1908 and 1957, there were rarely more than three or four Jewish families in Winchester at any one time. Relations with non-Jews were almost uniformly friendly, and the Jewish businessmen participated actively in civic activities, though they tended to socialize amongst themselves. In this small, predominately Protestant town of about 2,500 people, social life was church-centered; there was as little visiting between Methodists and Baptists as between Presbyterians and Jews. This Jewish social circle included Jewish families in many of the small surrounding middle Tennessee communities, such as Tullahoma, Shelbyville, and Fayetteville. Winchester Jews often took Sunday afternoon drives to visit these families.
The Jewish Community in Winchester Today
After the Paplanus family left in 1957, no Jews were left in Winchester. Winchester is one of countless small towns in the South where Jewish merchants plied their trade. While they did not sink deep roots or establish lasting institutions in the town, Winchester Jews left a legacy that has survived their 50-year absence.
Sources
Contributed by Sam Paplanus, who gratefully acknowledges the work of Joy Gallagher, whose compilation of the historical records of Winchester businesses was essential to this history.