Overview >> Texas >> Northeast Texas >> Ennis
Ennis: Historical Overview
Located in Ellis County just 39 miles from Dallas, Ennis was established in 1871 when the Houston and Texas Central Railroad made its way to the area. It was incorporated in November 1873 with just about 300 residents. Jews arrived shortly after its establishment and were some of the first to open businesses. Though a large Jewish population never existed in Ennis, Jews made an impact on the town.
Stories of the Jewish Community in Ennis 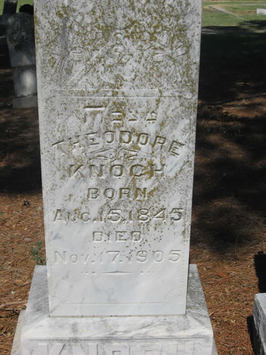 Gravestone of Theodore Knoch
Early Settlers
William Jolesch immigrated to the United States in 1864 from Austria. He came to Ennis in 1875 and set up a successful dry goods store, “one of the largest and most influential businesses that Ennis ever had,” according to a local historian. Polish-born Phil Freeman, who arrived in Ennis in 1872, and Austrian immigrant Joseph Reisman partnered together to establish the Reisman and Freeman dry goods store. Leon Cerf, a Jewish immigrant from Loraine, France, reached Ennis in 1876 and purchased John Chancellor’s grocery business. In July of that year, with his brother Isidore, they opened the I. and L. Cerf Grocery Store, located on South Main Street.

German immigrant Edmund Raphael arrived in Ennis in 1882 planning to stay only temporarily, but ended up remaining in town for the rest of his life He established his own public notary office but later turned to banking, becoming the President of Ennis’ First National Bank. Born in Ennis, the Cerfs’ sons continued working in town, with Leon’s son, Moise, becoming a planter and ranchman and Isidore’s son, Louis, turning to the farm loan business.

Most other Jewish business owners in Ennis were Central and Eastern European immigrants who arrived in the United States in the 1860s. Louis Levy left his native Germany in 1861, found his way to Ennis, and opened a dry goods store. Polish-born Abe Cohn came to the U.S. in 1858 and operated a saloon. Dry goods merchant Theodore Knoch and baker Ernst Lehman both emigrated from Germany. Hyman Brin left Poland in 1864 and established a dry goods store in Ennis. Russian Samuel Wartelsky also immigrated in 1864 and opened a saloon.
Civic Engagement
While Ennis’ Jewish population reached its peak in 1879 with just about 50 individuals from ten families, they were very involved in the larger community. In the town’s first elections in April 1874, Joe Reisman was elected one of its five aldermen. Leon Cerf and Phil Freeman helped get Ennis named a division point for the Houston and Texas Central Railroad. In 1891, the two were part of an eight-man committee sent to Houston to lobby for the establishment of Ennis as the railroad’s northern division headquarters. With this, machine shops and a round house were built in Ennis, employing several hundred workers and helping Ennis prosper. Adopting the tagline “Where the Railroads and Cotton Fields Meet,” Ennis would have remained a small agricultural hub if not for the work of Cerf, Freeman and the rest of the committee. Freeman was also one of the Ennis Temperance Council’s first members. Formed in 1873, the organization provided clean, wholesome entertainment as an alternative to drunken revelry, which was quite prevalent at the time.
Organized Jewish Life in Ennis
The Jewish community of Ennis began to organize in the 1890s. On January 16, 1892, seven women established the Ladies Hebrew Cemetery Society. With Fannie Raphael as its leader, it worked to maintain the small Jewish section of the town’s Myrtle Cemetery. In September, 1890, Ennis Jews established a religious school. With A. Wolf as superintendent, the religious school met every Saturday in the Odd Fellows Hall. Sam Levy, E. Furstner, E. Raphael, Fanny Jolesch, and Sallie and Ettie Levingston worked as teachers. According to a few sources, this was a congregation, though there is no evidence of them holding regular religious services. There was never a synagogue in Ennis. By 1900, the school seems to have been defunct. In a 1912 questionnaire for the Industrial Removal Office, a local Jew reported that there was no Jewish congregation in town. With Dallas so close by, it was probably easier for Ennis Jews to travel to a Dallas synagogue for major Jewish holidays than to establish their own small congregation. 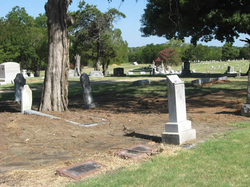 The small Jewish section of Myrtle Cemetery
The Community Declines
By 1900, the Jewish population in Ennis dipped to 38, and by 1912 to approximately 25 individuals from five families. However, some Jews were still just arriving in Ennis. Sam and Felice Rothschild first came to the United States from Russia in 1911. They settled in Ennis and opened the New York Bargain Store. Gradually, Ennis’ Jews left, and only a few members of the town’s early Jewish families remained. The 1954 City Directory lists members of the Cerf, Raphael and Rothschild families still living and working in Ennis.
The Jewish Community in Ennis Today
Today, the only remaining vestige of this onetime Jewish community is the 21 graves in Myrtle Cemetery’s small Jewish section.