Overview >> Florida >>  Quincy
Quincy, located just northwest of Tallahassee, was once a prosperous small town in North Florida’s shade tobacco region. A small group of Jews arrived prior to the Civil War, and the local Jewish community grew again in the early 20th century. Although there were never enough Jews in Quincy to start a congregation, they did establish a Jewish section in a local cemetery in the 1930s. ​
The 19th Century
White settlers founded Quincy in the 1820s, and the new town developed as an agricultural, economic, and administrative hub for Gadsden County. By 1850, the area had attracted a small number of Jews, including Samuel and Phillip Fleishman. Samuel was born in Bavaria around 1822 and immigrated to New York City in 1845. He initially worked as a peddler, but soon moved south and opened a store in Quincy. By 1860, six members of the Fleishman family lived in Gadsden County or neighboring Jackson County—a significant proportion of the two counties’ roughly fifteen Jews. They were attracted by the area’s developing plantation economy, which provided a customer base for their mercantile operations and accounted for more than three-quarters of the Florida’s cotton production. The agricultural economy also shaped Gadsden County’s racial demographics in the antebellum period, with the majority of the population made up of enslaved African Americans.

When the Civil War began in 1860, Quincy Jews faced the difficult choice of whether or not to fight for the Confederacy. Ferdinand and Phillip Fleishman had already acquired significant property, and both paid substitutes to enroll in their places. Simon Fleishman, who lived with Phillip, did serve in the Confederate Army and was captured by the Union Army in 1863. He spent the remainder of the war in prison. Samuel Fleishman, who had moved to Marianna in neighboring Jackson County in the 1850s, avoided conscription by placing some of his property in his wife’s name and escaping to New York City for the last years of the war. There is no record of any Quincy Jews owning enslaved people prior to emancipation.

Although the Fleishmans were the area’s largest Jewish family in the area at the time of the Civil War, only Simon Fleishman remained by 1880. In 1864, Ferdinand Fleishman committed suicide in Cincinnati, and his family subsequently relocated. Marianna resident Samuel Fleishman was assassinated in 1869 for allegedly urging African American citizens to seek vengeance for recent anti-Black violence perpetrated by white supremacist terrorists known as “regulators.” His brother Phillip Fleishman, of Quincy, moved away with his family following the killing. According to researcher Daniel Weinfeld, Samuel Fleishman’s murder was motivated by the regulators’ opposition to Black social equality rather than anti-Semitism. He notes that other Jews remained in Quincy and Marianna after the murder and that Quincy’s Jewish population reached seventy-five in approximately 1880.
​
Quincy’s Jewish population increased in the closing decades of the 19th century, but the town never developed its own synagogue. Instead, Jews in and around Quincy and Gadsden County maintained ties to coreligionists in Bainbridge, Georgia, just across the state border. From the 1870s on, Bainbridge boasted a stronger Jewish community, and Quincy merchants travelled there to board northbound trains on buying trips to New York. Some Quincy Jews were buried there as well, after the Bainbridge B’nai B’rith chapter founded a Jewish cemetery in 1878.
Tobacco Center 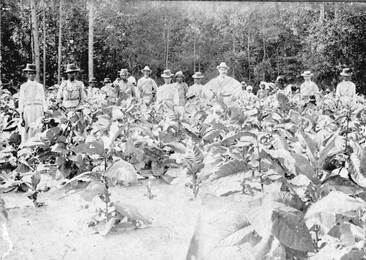 Max Wedeles (near center) with workers in a tobacco field, c. 1890s. State Archives of Florida.
Gadsden county emerged as a tobacco farming center in the late 19th century, with tobacco farmers there switching to large leaf shade tobacco shortly after 1900. The shade tobacco grew under sheets of cheesecloth and served as an excellent material for cigar wrappers. A number of Quincy Jews owned tobacco farms and related businesses, including Max Wedeles, a native of Bohemia who arrived from Chicago in 1896. Max Wedeles’s cousins, Emile and Joseph Wedeles, were partners with him in the Taussig and Wedeles company, although they do not seem to have made their homes in Quincy. The company was later known as the Max Wedeles Tobacco Company, and it operated farms and a packing house.
​
Many of Quincy’s Jews had roots in Central Europe, especially Bohemia. Max Wedeles came from the town of Osek (Wossek in German), now in the Czech Republic. His wife, Rosie Spitz Wedeles, was also a native Bohemian, and records suggest that two of her sisters made their way to Quincy as well: Katherine (Caroline) Spitz Buchbinder and Hanna Spitz Fischer. Other families, including the Feinbergs and Weinbergs, had roots in Russia and Poland. Census records indicate that those Quincy Jews who were not in the tobacco business owned dry goods and retail stores in the early 20th century.

The local economy in Quincy and Gadsden County remained closely tied to the tobacco industry until the 1970s. As a result, the area weathered a number of challenging periods, with a cycle of lean years, increased profits, and overproduction repeating itself regularly. A stubborn and aggressive fungus, blackshank, threatened crops during the 1920s, and the Great Depression caused a steep drop in tobacco prices followed by a slow recovery. Quincy’s dependence on a single industry and that industry’s constant boom-and-bust pattern may well have limited the local Jewish population, which never grew large enough to establish its own congregation.
Jewish Life
As Tallahassee developed a larger and more organized Jewish community in the 1930s, Quincy Jews also became involved. Joseph Spitz Wedeles, the son of Max Wedeles, was a founding member of Tallahassee’s Temple Israel, as was merchant Gerald Wynne. Tallahassee continued to grow as a Jewish destination over subsequent decades, just as the Jewish population of Bainbridge entered a long decline, and Quincy Jews maintained links to both towns. Gerald and Zina Wynne, for example, had relatives in Bainbridge but drove their children to Tallahassee for religious school in the 1930s and 1940s. Rabbi Julius Kravitz of Temple Israel in Tallahassee supported his remote congregants by traveling to Quincy for weekly Hebrew lessons. The Wynne family also imported kosher meat from Jacksonville for a time, but the practice eventually became too expensive.

Quincy's Jewish cemetery, 2018.
While Quincy Jews relied on nearby congregations for religious services, they did establish a Jewish section in a local cemetery during the 1930s. The cemetery includes 36 graves and holds the remains of three generations of Jewish Quincy residents: the parents and older relatives of early Jewish settlers, born before 1870; the immigrant generation who started Jewish businesses in Quincy, born from 1870 until about 1890; and their children, mostly American born between 1890 and 1920. The grave of Max Wedeles, who died in 1917, was moved from its original Bainbridge location at some point after the establishment of the Jewish section. There is no fence around the Jewish graves, which reflects the Reform orientation of Quincy Jewish residents, and at least one couple—buried at the edge of the section—was made up of a Jewish husband and Christian wife.
Jewish Decline
Local histories indicate that World War II brought a strong recovery to the local economy, but major changes in the shade tobacco industry were just around the corner. In the postwar era, cigarettes continued to rise in popularity while cigar consumption declined significantly, and shade tobacco growers continued to rely on labor intensive, hand-picking practices that became increasingly expensive with rising labor costs. At the same time, synthetic paper cigar wrappers became available, further decreasing the demand for shade grown leaf. Shade tobacco still made up nearly 70 percent of the value of Gadsden County agricultural products in 1969, but that figure dropped to 45 percent in 1974. Just a few years later, the county produced no shade tobacco whatsoever. 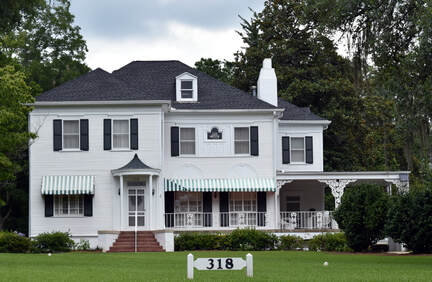 The Wedeles home, 2018.
The end of local tobacco production sent Quincy’s economy into a precipitous decline. The descendants of Jewish tobacco families had little reason to stay in the area, and Jewish businesses began to close as well. Gerald Wynne had encouraged his children to leave for college and pursue professional degrees in larger cities. He closed Wynne’s Department Store around 1980 as his health began to decline.

By the early 21st century, only a handful of Jewish residents lived in Quincy, most of them elderly. Still, traces of the area’s Jewish past remain, including stately homes formerly owned by Jewish tobacco growers and some of their old processing and production buildings. As of 2019, at least a few descendants of Jewish families remain in town, including David A. Gardner, Executive Director of the Gadsden County Chamber of Commerce.
​Selected Bibliography
Heimovics, Rachel, and Zerivitz, Marcia. The Florida Jewish Heritage Trail. Florida Department of State, 2000.
Quincy Files, Jewish Museum of Florida, Florida International University
Pando, Robert T. “Shrouded In Cheesecloth: The Demise Of Shade Tobacco In Florida And Georgia”, 2003.
Weinfeld, Daniel. “A Certain Ambivalence: Florida's Jews and the Civil War.” Southern Jewish History, vol. 17, pp. 91-129, 2014.
Weinfeld, Daniel. “Samuel Fleishman: Tragedy in Reconstruction-Era Florida.” Southern Jewish History, vol. 8, pp. 31-76, 2005.