Overview >> Florida >>  Sebring
Sebring, Florida, was founded in 1912 by developer George Sebring, who designed the downtown around a circular park with six avenues radiating outward. The area around the town, known for rolling hills and natural lakes, had already been used for cattle grazing and citrus farming. Sebring soon emerged as an inland tourist destination for  hunting, fishing, and golf, as well as a commercial hub for the local agricultural economy. Jewish life in Sebring dates back to the early 1920s, not long after the town became the seat of newly formed Highlands County. ​
Michael and Sadie Kahn 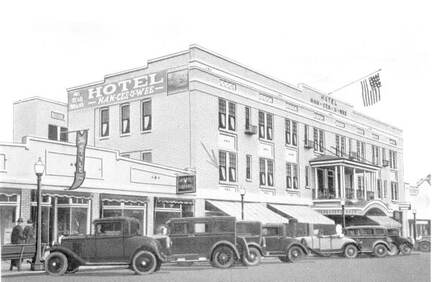 Michael Kahn moved to Sebring to open a store in the ground floor of the recently built Nan-Ces-O-Wee hotel. Photo courtesy State Archives of Florida.
Sebring attracted its first Jewish residents about a decade after its founding. Michael and Sadie Kahn were Jewish immigrants from Lithuania who owned a business in the small town Sale City, Georgia, as of 1920. Michael Kahn wanted to do business in a more promising market, so he travelled south through Florida scouting a better location in 1921. After visiting Avon Park, he ventured farther down to Sebring, where George Sebring persuaded him to establish a dry goods store. Sebring believed that Jewish merchants would be integral to the success of his new city, and he offered Kahn a retail space in the ground floor of his Nan-Ces-O-Wee Hotel, then under construction. He also committed to donating a piece of land for the establishment of a synagogue once enough Jews had arrived in the area. (Sebring had already given land to several Christian churches.) Michael Kahn returned to Sale City excited for the move, and he and Sadie started their lives in Sebring in the winter of 1921-1922.

According to family history, the Kahns brought an employee with them named Phil Abrams. Before long, they added to the local Jewish population with the birth of Leon, the first of their four children. Other Jewish families arrived in Sebring and nearby towns in the 1920s, and by mid-decade the local Jewish community was strong enough to open a small synagogue, Temple Beth Israel. Michael and Sadie Kahn were both Jewishly knowledgeable, and he served as the lay leader for the small congregation. High Holy Day services in Sebring even drew Jews from outside Highlands County, with worshipers reportedly travelling from Lake Wales (to the north) and from several towns around Lake Okeechobee (to the south).
Ups and Downs
Although Sebring’s Jewish community initially grew, the Great Depression led many local Jews to seek out livings elsewhere. By the 1930s, only the Kahn family remained. Michael and Sadie’s children later recalled that they were the only Jewish children in town and that they only used the synagogue for the High Holy Days. World War II brought renewed Jewish activity in the early 1940s, when 200 Jewish service members were stationed at nearby Hendricks Army Airfield. Michael Kahn once again acted as a lay rabbi, leading religious services for Jewish military personnel. The revival of Jewish life was short lived, however.  Kahn died in 1943 at fifty-one years old, and Hendricks Airfield closed at the end of the war. From 1945 until the mid-1950s, the synagogue was rarely, if ever, used, and it was torn down after the building developed structural problems.

The Kahn family had a comfortable life in Sebring, despite being one of the only Jewish families in the 1950s and 1960s. Michael Kahn had purchased a citrus grove from foreclosure in 1933, and Sadie continued in the citrus business after his death. The family purchased additional groves over the years and also maintained their department store through at least 1964. Jews were well accepted in Sebring since the town’s founder recruited Michael Kahn in the 1920s. Several Temple Beth El congregants, including Ed Wolf and Phillip Aronson, helped to found the local Elks Lodge in 1926. Michael and Sadie Kahn became known as local business leaders, and their children (three of whom remained in Sebring) further developed the family’s reputation for civic engagement. Bucky Kahn was active in the Lions Club, the Elks, the Sebring Chamber of Commerce, and other civic organizations. Ruth, who married Stanley Davis in 1949, won election to the Highlands County School Board in the 1970s and eventually served as the board’s chairwoman. She was also involved in the family citrus business and started her own realty company. Marvin Kahn served on local and statewide agricultural boards, including the Highlands County Cattleman’s Association, the Florida Beef Council, and the Florida Citrus Commission. In 2018, he was inducted into the Florida Citrus Hall of Fame. Following Sadie Kahn’s death in 1979, the city created a small downtown park in her honor, next to the former site of Kahn’s Department Store.

For decades, the Kahns and other Jewish families had to travel for religious services or to provide their children a Jewish education. During the 1950s and 1960s, Sebring Jews held memberships at Temple Emanuel in Lakeland, roughly 60 miles away, and their children attended religious school there. Despite the tiny size of the Jewish community, the Kahn family purchased a plot at Sebring’s Pinecrest Cemetery in the 1960s and had Michael Kahn’s remains, originally buried in Orlando, relocated. That plot, with room for approximately 100 gravesites, now serves as a Jewish section within Pinecrest Cemetery.
Jewish Growth
In the mid-1960s, new Jewish families began to move to the area, and local Jewish life picked up again. Sadie Kahn remained an important figure in the Jewish community, as she hosted Shabbat evening dinners, religious services, and other community events in her home. By the early 1970s, Sebring Jews began to reorganize the congregation under the leadership of Marvin Kahn, Harry Roseman, and Al Morrow.

​They briefly rented space at an Episcopal Church, before holding services in the Leisure Lakes Clubhouse in Lake Placid for many years. In 1979, Rabbi Morton Applebaum (formerly of Akron, Ohio) started serving the congregation on a part-time basis, and they began to work on building a synagogue in the mid-1980s. By fall of 1986, the congregation had raised $100,000 toward a new building, some of which had been kept in a savings account since the sale of Temple Beth Israel’s original property. Tom and Marjorie Wohl donated land for a new synagogue, and the community hosted a groundbreaking ceremony in October 1986. Although the congregation only had fifty families when they started construction, they were confident that the new building would attract Jews from around Highlands County who had been travelling elsewhere for services, Jewish education, and social events. The synagogue opened in 1987 under the shortened name of Temple Israel. In late 1980s and 1990s, the small congregation offered religious school and adult education, as well as regular religious services led by members and visiting rabbis from nearby cities. ​
The 21st Century
The Jewish population of Highlands County remains small, with an estimated 150 Jews in 2016, according to the American Jewish Year Book. As of 2019, Temple Israel of Highlands County holds regular services and other events but does not have a religious school. Cantor Riselle Bain (who played young Miriam in the 1956 epic The Ten Commandments) has served as the congregation’s spiritual leader since 2015.