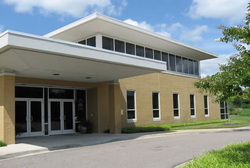 The history of Memphis’ first and only conservative congregation begins in the living room of M. Starr.  It was there on December 16, 1954 that 37 people gathered to discuss forming a congregation that would chart a middle path between the Reform Temple Israel and the several Orthodox congregations in Memphis.  Only a few weeks later, nineteen founding families officially chartered Beth Shalom Synagogue.  By mid-January of 1955, they held their first worship service in the chapel of the B’nai B’rith Home.

During its first year, Beth Shalom held services and programs all over town, including the Memphis Little Theater and the Jewish Community Center.  Although they didn’t have a permanent building, they formed a sisterhood and religious school which met at the Highland Nursery School.  They were also able to hire a rabbi, M. Herbert Berger who led services in a series of rented spaces.  He left in 1956 and was quickly replaced by Rabbi Meyer Passow, who formed a daily minyan which still continues today.  Passow served until moving to Israel in 1959.  Arie Becker took over as rabbi and led Beth Sholom for twenty years.

In May of 1956, the congregation purchased a two-story building on five acres of land on South Mendenhall Street.  The following year, they built a parsonage for the rabbi on the property.  The young congregation grew quickly, and had to build a new chapel to handle the increasing membership.  The 1960s saw a flurry of new construction.  After fire code restrictions prevented them from using the second floor of their building as a religious school, they launched a capital campaign to build a new education building on the property.  Soon after dedicating the new education building in 1961, they began raising money for a new synagogue, which was completed in 1967.  The new construction continued into the 1980s, with a new chapel and education building.

The congregation continued to flourish in its new facilities.  They hired additional clergy to handle the growing membership, including Cantor Elliot Finkelstein in 1976 and Assistant Rabbi Edmund Winter in 1978.  Rabbi Winter took over the senior position after Rabbi Becker died in 1979.  Rabbi Ephraim Rubinger replaced Winter in 1984.  Peter Light served as rabbi from 1990 to 2004.  Beth Sholom’s new synagogue was home to numerous social and fundraising events, such as the Lox Box lunch, Las Vegas Night, and several Israel Bond Dinners.

Beth Shalom suffered a horrific event in 1980, when its Torah scrolls were stolen from the ark and thrown into the Wolf River.  The thieves also stole two scrolls from the Orthodox congregation Anshe Sphard-Beth El Emeth.  While the scrolls were eventually found, they were unable to be restored.  All of them had to be replaced, though they did return their Holocaust Torah to the ark.

Like other Conservative congregations around the country, Beth Sholom began to adapt to the changing role of women in society.  In 1988, they started counting women towards the minyan and allowed them to be called to the bimah for torah blessings.  Rachel Shankman was the first woman elected president of the congregation, and the first to receive Torah honors.

Memphis has long been a regional Jewish center, with congregations often embracing the Jewish communities in small towns in the Arkansas and Mississippi Delta.  In 1995, Beth Sholom adopted Temple Israel in Blytheville, Arkansas.  In 2000, the Blytheville congregation donated its stained glass windows to Beth Sholom, which were installed in its new chapel.  After Temple Israel closed in 2003, it donated its remaining Judaica to Beth Sholom, including a Holocaust Torah.

In 2000, Beth Sholom finally left its longtime home on Mendenhall Street and moved to a new Jewish campus on Humphreys Avenue that also houses the city’s Solomon Schechter Day School, which got its start in 1988 in Beth Sholom’s education building.  Since 2005, Rabbi Aaron Rubenstein has led the congregation, which continues to be the only Conservative congregation in Memphis.