Overview >> Arkansas >>  Dermott
Historical Overview
Dermott, Arkansas, is one of several towns in southeast Arkansas where small numbers of Jews have lived since the late-nineteenth century. Located seventy-two miles south of Pine Bluff, Dermott grew when the Missouri-Pacific railroad line came through town. Dermott became incorporated in 1890. Soon after, a small Jewish community began to develop. By 1937, twenty-four Jews lived in Dermott. Their numbers have since declined, but Jews continue to live in Dermott today.
Stories of the Jewish Community in Dermott 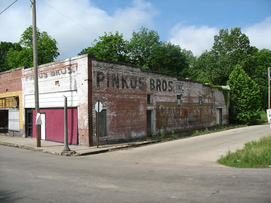 The Kimpel Family
Ben Kimpel came to the United States from Germany in 1876. After several years as a peddler, Kimpel settled in Dermott where he opened one of the first stores in town. His brother David soon joined him in Dermott. The Kimpels became very successful local businessmen, facing few social or economic barriers because of their Jewishness. David Kimpel formed significant business partnerships with non-Jews in Dermott. His retail business was known as Kimpel and Bynum; he also formed a cotton buying and ginning partnership with William Lephiew. Kimpel was involved in civic affairs and was elected as Dermott’s second mayor in the 1890s. This acceptance carried over to his personal life. David Kimpel married Beulah Godwin, who was Methodist. They had four children, only one of whom married a Jew. This early example of intermarriage shows how accepted Jews were in a small town like Dermott, though it also suggests that this acceptance created a new set of challenges for Jews. 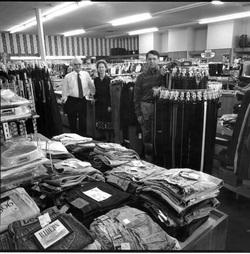 The Dante Family
Eastern European Jews began to settle in the area in the early-twentieth century. Many of these settlers were peddlers with economic ties to the city of Pine Bluff. Eli and Charles Dante started out peddling in the area; they got their goods from William Rosenzweig in Pine Bluff, which shows the importance of Jewish economic networks. Eli settled in Dermott and opened a dry good store. Dante became involved in local politics and served as a town alderman in Dermott.

As a Jewish dry goods store owner, Dante had plenty of company in Dermott. At one time, there were eight Jewish-owned dry goods stores in town. Joseph Weisman came to the United States from Romania, settling in Dermott in 1912. Weisman opened a dry goods store and eventually became a prominent local merchant. His son-in-law Bernard Levi, from Pine Bluff, took over the store after Weisman’s death. Levi was very civically involved, and was president of the local Rotary Club. He ran Weisman’s store into the 1990s.

Abe Abroms
Abe Abroms was the child of Russian immigrants. He came to Dermott during World War I, and opened a clothing store. Abroms was very involved in the community, helping to build a hospital in town and working to attract industry to Dermott. His business was successful; he opened four branch stores across the Deep South. He had a branch in the Mississippi Delta, one in Louisiana, and two in Arkansas. Abroms sold the department store in Dermott to relatives in 1972; the business was eventually sold out of the family in the 1980s. Abroms was also a wholesaler of women’s clothes. He brought his nephew Joe Goldstein to town to work in his businesses. Goldstein was a founder of the First National Bank of Dermott and later served as president of the local chamber of commerce.

Isadore Pinkus
Isadore Pinkus started peddling out of Pine Bluff and opened a store in Dermott by the beginning of the twentieth century. He was also involved in trading hides and furs. The Pinkus family was Orthodox, but they were not able to keep a kosher home in Dermott since kosher meat was not available in the area. Despite this limitation, Isadore worked to preserve his religious traditions. He helped organize minyans when mourners needed them, attracting Jews from area towns to Dermott. His son Mendel continued the family business. He and his wife lived in Dermott until the 1990s.

Organized Jewish Life in Dermott
This group of Jewish merchants worshiped together and closed their stores on the High Holidays. After he arrived in town, Eli Dante founded an Orthodox congregation in Dermott in 1905. Dante had studied for a time to be a rabbi in Poland. This small congregation, which was never officially chartered, drew worshipers from surrounding towns including Lake Village, McGehee, and Arkansas City. The congregation had about seventeen families as members, and they drew as many as 75 people for High Holiday services. They met in private homes at first, but, as they grew, they began to meet above the town’s movie theater. They continued to meet until the late 1920s, when many of the Jews in the area had moved away. In the 1940s, a Reform congregation, Meir Chayim, was founded in nearby McGehee. Jews in Dermott joined the new congregation. Orthodox Jews used to hold an early minyan at the McGehee synagogue, which was followed by the Reform service. Dermott Jews continue to be active in Meir Chayim. ​
The Jewish Community in Dermott Today
The Jews of Dermott remain a small but dedicated community.