Overview >> Arkansas >>  El Dorado
Historical Overview
The difference between El Dorado and other towns in southern Arkansas is the difference between black and white. While many other towns were founded on the cotton trade, El Dorado’s history was shaped by oil. Although El Dorado was incorporated in 1870, it remained a small town until “black gold” was discovered. At the beginning of 1921, El Dorado was a sleepy town of about 4,000 people. After Busey’s well struck oil on January 10 of that year, people flocked to El Dorado. By 1922, 35,000 lived in this south Arkansas boom town. Many initially stayed in tent cities, paying one dollar a night to sleep in a cot for 8 hours.

El Dorado was home to a small Jewish community in the twentieth century.
Stories of the Jewish Community in El Dorado 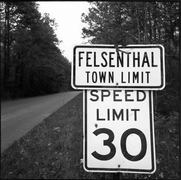 The Felsenthal Brothers
Prior to the discovery of oil, brothers Adolph, Isaac, Sidney, and Lee Felsenthal lived in Union County, Arkansas and started a land and timber company in the early 1900s. In 1904, they founded the town of Felsenthal, Arkansas, which soon grew to 1,200 residents. But a series of floods and the rise of nearby Huttig as a sawmill town led to Felsenthal’s decline. In 1911, the town was unincorporated. The brothers also owned a dry goods store in El Dorado, which they promptly sold after oil was discovered. They took the proceeds from the sale and invested in the local oil industry and real estate. The Felsenthals were co-owners of the Exchange Building, which became the largest office building in town when it was constructed. Ike Felsenthal was a co-founder of the local chamber of commerce in El Dorado.
​
A Growing Community
Several other Jews were part of the town’s population boom, settling in El Dorado to take advantage of the growing economic opportunities in the area. A small number of Jews lived in town, before 1921, but their numbers boomed along with the “black gold” rush of the 1920s. By 1922, local Jews had founded a B’nai B’rith lodge. Around the same time, they founded two congregations, one Orthodox and the other Reform. The two congregations soon merged to form a congregation called Ohev Zedek (Love of Justice). J. Ben Miller, an insurance salesman who arrived in 1925 led services for the congregation. By 1927, 124 Jews lived in El Dorado.

Most of these Jews were merchants who catered to the oil field workers in town. Isadore Berk opened a jewelry store in El Dorado but sold it to his brother Ben once he became an optometrist. Samuel Baum also owned a jewelry store. The success of these two jewelry stores shows how El Dorado was awash in money during the peak years of the oil boom. Morris Lewis opened The New York Store in 1932 and ran it for 42 years. Martin Bernstein came to El Dorado after his in-laws opened a business in town. A talented violinist, Bernstein sold his store in 1932 and founded the El Dorado Conservatory of Fine Arts with his wife, Jean. They taught music, dance, and art classes before moving to Cheyenne Wyoming in 1936. 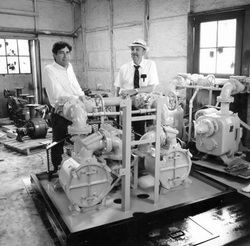 After the Boom
Like the rest of El Dorado, the Jewish community’s fortunes rose and fell with oil production. After several years, the boom ended thanks to overdrilling and the Great Depression, which knocked the price of oil down below the cost of production. By 1936, the Jewish community had shrunk to half of its size only a decade earlier. Ohev Zedek disbanded, as many of the remaining Jews in town joined the temple in nearby Camden, Arkansas. In 1937, there was a second significant oil discovery in the area, and another short-lived boom took hold in El Dorado.

A Brief Resurgence
The Jewish community of El Dorado also experienced a brief resurgence as several new Jewish families arrived during the 1940s. By the end of World War II, about thirty Jewish families lived in El Dorado. Jules Feinberg came in 1952, and opened an engine and pump company, which is still in operation today. Perhaps the most prominent Jew in El Dorado during the post-war period was Irving Pesses. Born in Poland in 1900, Pesses immigrated with his family to New Orleans at a young age. Pesses was a World War I veteran and a Tulane graduate who came to El Dorado in 1932 to open a pipe and supply business. He became very involved civically and served nine years as mayor, from 1967 until his death in 1976. During that time, he often told people he had been born in New Orleans, although the majority of historical records indicate otherwise. Pesses was also the president of the local chamber of commerce and a member of the executive board of the Arkansas Municipal League. 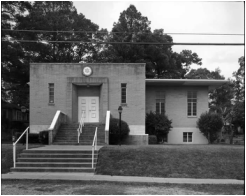 Temple Beth Israel
With the resurgence of the Jewish community after World War II, El Dorado Jews reorganized a congregation, founding the Reform Temple Beth Israel. The Arkansas Jewish Assembly, a statewide organization of Jews in the state, played an important role in encouraging them to create the new congregation. Beth Israel met in a rented hall on North Washington Street for much of its first decade. In the early 1950s, they began to raise money for a permanent building. Local Gentiles contributed to the building fund, and a former Broadway star who lived in the area headlined a fundraising concert held at the local high school. Irving Pesses owned the construction company that built the synagogue. The fundraising was so successful that when the synagogue was completed in 1955, the congregation owned it outright.

Beth Israel never had a full-time rabbi. J.B Miller continued to lead services until his death in 1970. They would have a student rabbi from Hebrew Union College to lead services on the High Holidays. During the 1960s and 70s, Rabbi Joseph Levine of Texarkana came to El Dorado once a month to lead services. He would also lead a Torah study and help with Beth Israel’s small religious school.
​
Anti-Semitism in El Dorado
As evidenced by the election of Irving Pesses as mayor, Jews enjoyed a significant degree of acceptance in El Dorado, though they did face some anti-Semitism. The El Dorado country club did not accept Jewish members for years. This prohibition was finally scrapped in the 1970s, after which every Jewish person in town received a personal apology and an invitation to join the club.
The Jewish Community in El Dorado Today
By the 1980s, only six Jewish families remained in town. Beth Israel only met occasionally although they maintained a small Sunday school. Today, only a few Jews still live in El Dorado. The oil boom years have long passed, and most Jews moved on to find greater economic opportunities elsewhere.