Overview >> Mississippi >>  Canton
Overview
Early Jewish Settlers
In the three decades following the 1828 creation of Madison County, the area’s population grew rapidly. In 1830 the U.S. Census found 2,806 free people and 2,167 enslaved Black people in the county. As cotton farming increased, so too did the enslaved population; by 1860 more than 18,000 of the county’s approximately 23,000 residents were enslaved Black people. Merchants and peddlers with last names such as Eichelstine and Abram lived in Madison County by 1850, but the first known Jews in Canton do not appear in historical records until the 1860s.

Charles “C.L.” and Sophie Gross arrived in Canton shortly after the Civil War. Both C.L. and Sophie came from Alsace-Lorraine. It is unclear where they lived immediately before Canton; C.L. served in the Confederate Army with a Mississippi brigade, and Sophie bore their first two children in Tennessee during the mid-1860s. In Canton he briefly owned a small business on the town square with a Mr. Keyser but struck out on his own in 1866. Sophie’s brother Jacob Loeb ended up migrating to Mexico during the Civil War and eventually made his way to Canton afterward. There he met and married Mary Gross, the half-sister of C.L. Gross, who was visiting from New York.

Joseph Perlinsky arrived shortly after the Gross family. Born in Gostyn, Prussia (later Poland), in 1849, he first immigrated to New York City in the mid-1860s. After a short stint in Jackson, Mississippi, he moved to Canton in 1867 and opened a tailor shop, which later sold menswear. His brother Henry joined him soon after, and the Perlinsky brothers became prominent local citizens. Joseph served as foreman of the grand jury of Madison County, and his friends affectionately referred to him as “Judge.” 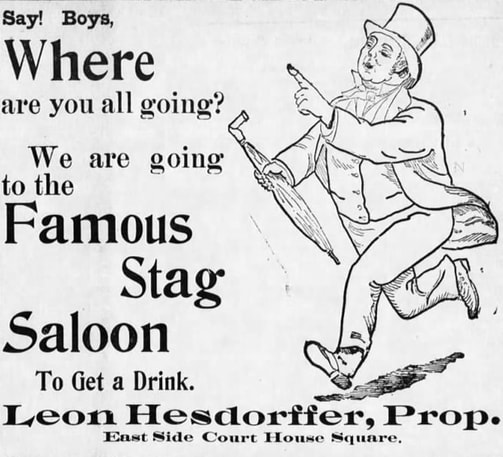 Leon Hesdorffer, son of Moses and Harriet Hesdorffer, owned the Famous Stag Saloon. Canton Times, May 25, 1900.
A third early Jewish family were the Hesdorffers, who moved from Carthage, Mississippi, about 30 miles east of Canton. Moses Hesdorffer opened a dry goods store in Canton after the Civil War. The 1870 census lists a sizable personal estate worth more than $15,000, which enabled Hesdorffer and his family to expand their business ventures. His sons, Eugene and Albert, opened a grocery store that was referred to locally as “the hollow.” Around the turn of the century, their brother Ben Hesdorffer owned the Canton Commercial Co. with William B. Wiener, who belonged to another local Jewish family.
Organized Jewish Life
The Gross-Loeb, Perlinsky, and Hesdorrfer families were not the only Jews in Canton and surrounding towns. In 1867 local Jews endeavored to hold holiday services and took the name Benai Yisrael (Children of Israel). A correspondent to the Israelite (a national Jewish newspaper) indicated that the group claimed 22 members. The Jewish men of Canton formed a chapter of B’nai B’rith (a national fraternal organization) the following January, and the local lodge obtained a Torah scroll in 1868.  A letter to the Israelite from that time claims that the congregation observed “every high feast” with services in a private home and that “the members of our congregation are pretty well divided” between “old fogies,” who preferred traditional worship, and a contingent who preferred Reform practices.
​
The congregation developed a formal leadership structure within a few years of its emergence. On August 29th, 1870, Jacob Loeb hosted a meeting at his home, during which members of the local Jewish community voted to form a congregation and elected the following officers: C.L. Gross, president; Jacob Stadeker, vice-president; David Zon, secretary; Samuel Loeb, treasurer; M. Hoel, Joseph Wolf, and Jacob Loeb, trustees. By 1875 the group had altered the spelling of its name to Congregation Bnai Israel (later B’nai Israel).

​
The Jewish community of Canton had high hopes for its future in the early 1870s, and outside observers compared Jewish life there favorably to nearby Jackson. Rabbi Judah Wechsler of Columbus, Ohio, wrote in 1871 that “our coreligionists of Canton are a noble band of true Israelites… I predict good results of the new congregation at Canton.” The same year, Canton Jews sought donations for synagogue construction in The American Israelite, a wide-circulating Jewish newspaper. They cited their “fast-growing and wide-spreading young generation” as evidence of a promising young community.

​Although Congregation B’nai Israel planned to build a synagogue early in its existence, the community obtained a cemetery first. The earliest burial in the Canton Jewish cemetery dates to 1872. A number of Canton’s late-19th-century and early-20th-century gravestones include places of birth—primarily in Alsace-Lorraine and the Rhineland, with a few outliers in Prussia (later Poland) and Amsterdam. These graves include Jews from other small towns, especially Kosciusko, Mississippi.
The young congregation did not dedicate its synagogue until the late 1870s. Fundraising for the building took several years, in part due to economic conditions in the post-Civil-War South. Although construction of the modest wood-frame synagogue finished in 1877, the congregation delayed its dedication ceremony until 1879 due to an outbreak of yellow fever. In addition to appealing for donations from out-of-town coreligionists, local Jews received funds from Canton’s non-Jewish community, both before and after the synagogue’s construction. In 1879, for example, the local newspaper reported on a successful and profitable “Grand Hebrew Ball” which drew a large crowd and ran until early in the morning.

​At the time of the synagogue dedication Rabbi Hecht served as spiritual leader and teacher, and Julius Loeb held the office of president. Although there had been an Orthodox contingent within the community, Reform practice had won out by the late 1870s; the synagogue included an organ, and worship services followed Minhag America, the early Reform prayer book developed by Rabbi Mayer Wise. Rabbi Jacob Safa followed Rabbi Hecht, but the congregation primarily relied on lay leadership and visiting rabbis throughout its history. 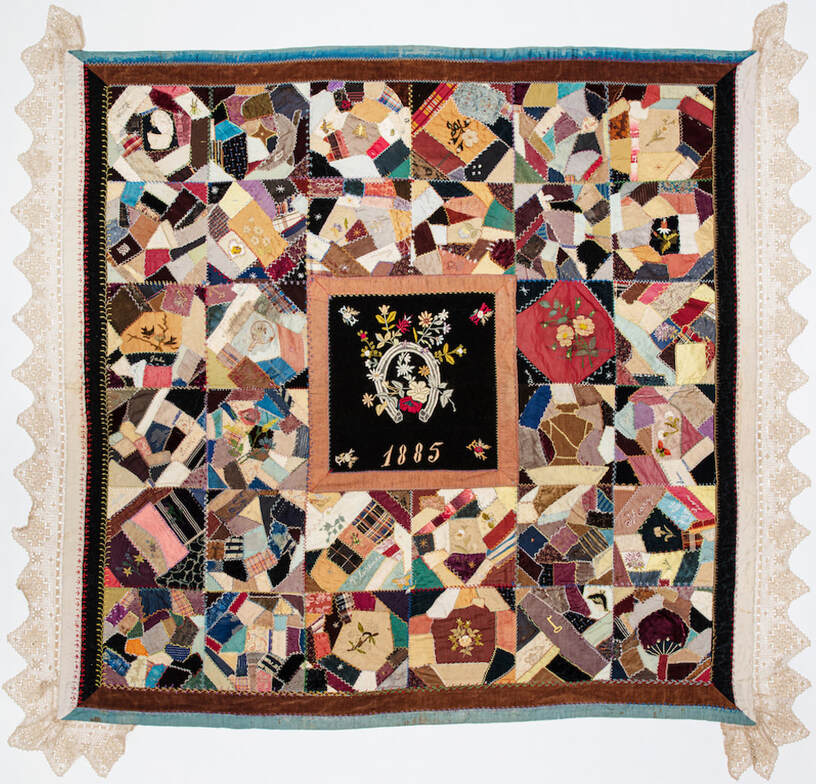 The 1885 crazy quilt, sewn by Jewish women of Canton. Courtesy the Museum of the Southern Jewish Experience.
While much of the historical record reflects the activities of Jewish men in Canton, women played a significant role in communal life, in part through women’s groups. By the mid-1880s they organized a Jewish Ladies’ Sewing Circle. In 1885 the group collaborated to create a large “crazy” quilt—an asymmetric design style popular at the time—which they sold through a raffle in support of the congregation. The quilt features silk fabric and detailed embroidery, the names of local community members, and decorative images such as beetles and flowers.
Civic Life
Canton Jews made up a visible and generally well-regarded component of white society. Around the high holidays, local newspapers announced the closure of Jewish businesses, which occupied several of the major storefronts on the town square. In 1873 the local paper praised the “solemn and impressive ceremonials recently observed by our Israelitish friends.” Jewish Canton residents also took part in the general social and civic life of the city, and, over the years, Jewish men belonged to organizations such as the Odd Fellows and Rotary Club. The Country Club of Canton included Jewish members from its founding in 1923 through the early 21st century. Additionally, Christian women participated in religious services at Congregation B’nai Israel as organ players and choir members. Jewish civic contributions included philanthropic giving; when Eugene Hesdorffer died in 1925, a number of non-Jewish locals approached his widow Henrietta to tell her that he had discreetly supported them in times of need.​
The Decline of Jewish Canton
Canton never attracted a large Jewish community, but the overall population of Madison County increased during the late 19th century, which reflected a good economic environment for Jewish business owners. In 1907 there were approximately 20 families associated with B’nai Israel, a slightly smaller number than had belonged to the congregation thirty years earlier. As the 20th century progressed, younger generations of Canton Jews often moved to larger cities, and few newcomers arrived to take their places.
​
William (Bill) Weiner Jr. and Julian Weiner, born in 1915 and 1917 respectively, were among the younger Jews who chose to leave Canton. Their grandfather Samson Weiner arrived in Mississippi around 1850 and lived in a number of towns before settling in Canton. His son William (born 1863) owned several businesses during his career and eventually became president of First Madison County Bank. He married Carrie Loeb, daughter of Jacob Loeb—a late first marriage for both parties. Bill and Julian remained close throughout their lives; they enjoyed hunting and fishing together, attended school together through medical school at Tulane University, and eventually practiced medicine in adjacent buildings in Jackson, Mississippi.
When Bill and Julian Wiener left for college in the 1930s, the local Jewish population had already begun to decline. An estimated 85 Jews lived in town, down from 100 or more in earlier decades. Regular worship services continued under the leadership of Max Lewinthal, who had received rabbinical training but held no ordination, and who others regularly referred to as “Rabbi Lewinthal.” Born in Germany in 1875, Lewinthal was employed as a “reader” by Temple Israel of Brookhaven (where he had relatives) before moving to Canton by 1918. In Canton he worked as a salesman but regularly officiated lifecycle events in Canton, Brookhaven, and other Mississippi towns.

Although the Jewish population of Canton likely peaked in the late 19th century, Jewish-owned businesses remained prominent well into the 20th century. Jewish stores and restaurants included Schlesinger’s Smart shoe Store; Hesdorfferr’s Grocers; Stein’s Golden Rule Store; Frey’s Food; I. Rosen’s Apparel Shop for Women; Kaplan’s Dry Goods and Clothing; and Hirman Brumberg’s Busy Bee Café. Joseph Perlinsky’s son Isador ran Perlinsky’s Men’s Store, first with his brother David and then by himself until the 1950s. Abie Levy (of Canton) and Ellis Hart (of Winona) co-owned the store for more than twenty years. Hart’s daughter Jo Ann Hart Gordon and her husband, Bill, worked in the store for a time, before it was sold in 1981. The Gordons (along with the Kaplan family of Pickens) used to drive their children to Jackson for religious school and other Jewish events. Jo Ann served for many years as the director of the Canton Convention and Visitor Bureau, and she is working for them again as of 2022.

As Jewish-owned businesses became less common, the Jewish population continued to decline. By the end of the 1950s Congregation B’nai Israel claimed only ten member families. Improved highways reduced the driving time between Canton and Jackson, allowing Canton Jews to more easily participate in Jewish life in the larger city. By the early 1970s the B’nai Israel building had fallen into disuse, and the only remaining congregants were a handful of older couples. The congregation sold the synagogue in 1974, and it was soon demolished. Isidore Perlinsky arranged for the city to take over cemetery maintenance the same year in exchange for a $4,000 gift; the burial site occupies the southeast section of the city cemetery. 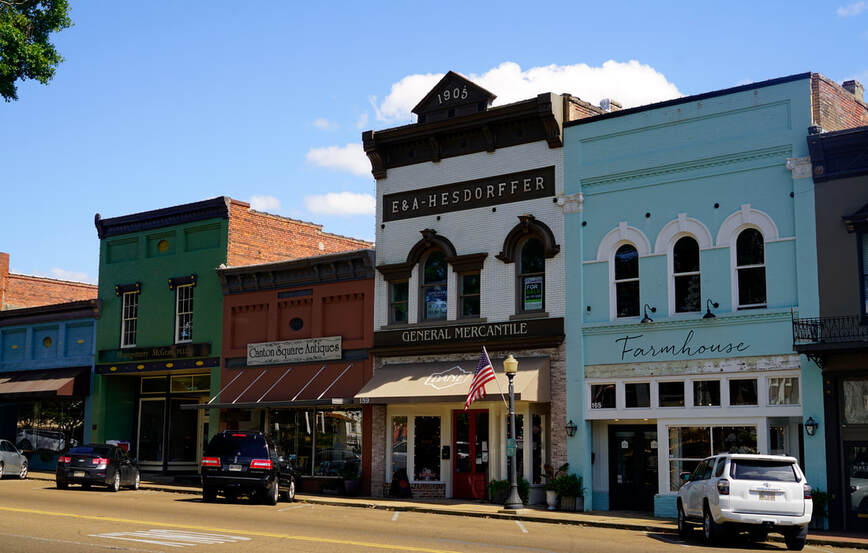 The Hesdorffer Building (1905) on the historic Canton Square, May 2022.
The history of Jewish Canton did not end with the sale of the synagogue, however. Former congregants continued to live in Canton until the death of William Levy in 1999; he was a World War II veteran, retired general manager of Levy’s Department Store, and lifelong resident of Canton. Bill and Jo Ann Gordon were the last remaining Jews in Canton until his death in 2017. She moved to nearby Madison, Mississippi, a few years later. While the longstanding Jewish families of Canton no longer live there, their stories remain visible in the historic storefronts of the town square and in the Jewish section of the city cemetery.
Last updated May 2022
Selected Bibliogrphy
​Perlinsky, David and Isadore Perlinsky, “Then and Now: Through three-quarters of a century in Canton.” Canton, 1940. Institute of Southern Jewish Life Archives.