Overview >> Mississippi >>  Brookhaven
Historical Overview
Jewish Merchants in Brookhaven
The first Jewish residents in Brookhaven arrived as early as 1852 and likely migrated from settlements along the Mississippi River, including Port Gibson, Natchez, and Vicksburg. They may also have arrived as traders traveling up the Bogue Chitto River. As in other towns and cities across the South, Jewish newcomers established mercantile businesses that served the growing commercial hub and the surrounding countryside. In 1861 local Jews established a burial society and purchased land for a Jewish cemetery from Milton Jacob Whitworth, a wealthy Brookhaven resident. According to a later history, Whitworth’s willingness to sell the property reflected his hope that Brookhaven would be “attractive to worthwhile settlers.” The burial site still exists as a section of Rosehill Cemetery on E. Monticello Street.

Brookhaven Jews, like most of their southern co-religionists, enjoyed the rights and privileges of  white citizenship. Prior to the Civil War, Brookhaven was located in Lawrence County. The county was home to approximately 3,700 enslaved African Americans in 1860, who made up 40 percent of its 9,213 residents. This was a smaller proportion of enslaved residents than was found in areas closer to the Mississippi River at the time. Census records do not show that any of Brookhaven’s few antebellum Jews enslaved Black workers, but Leiser Alcus, who lived in nearby Pike County, is listed as the owner of six enslaved people in the 1860 Slave Schedules. By 1870, Alcus had moved to Brookhaven, where his family lived next to the family of Abraham and Sarah Scherck, who were likely relatives. Both men were merchants, and each family had the means to employ two live-in African American domestic workers. 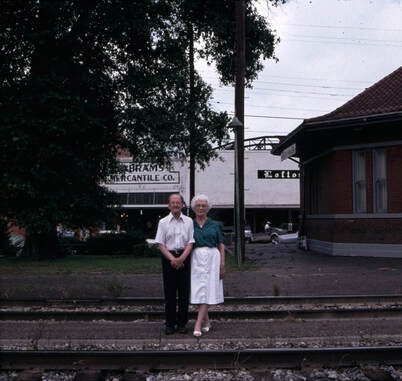 Cliff and Wilma Abrams with Abrams Mercantile Co. in the background. Photo by Bill Aron.
In the years after the Civil War, Jewish merchants played prominent roles in the continued development of Brookhaven’s business district. Brothers Israel and Sam Abrams started a general store in the late 1800s called Abrams and Abrams. This store became Abrams Mercantile Company after 1915, when Sam left for the furniture business. From that point until the end of the twentieth century, Abrams Mercantile Company was a staple for hardware goods in Brookhaven. Generations of the Abrams family sold all types of goods including cow bells and stone churns, and the store became known for the motto: “if you don’t find it here, go home.” The store stayed in business until the death of Clifford Abrams (the son of Israel Abrams) in 2001. At age 96, he was the oldest merchant in Brookhaven.​
​
Other stores in the early 1900s included Louis Cohn & Brothers General Merchandise, Marx Motors, Lewinthal Drug Store, and Bowsky Clothier. George Bowsky, co-owner of Bowsky Clothier, purchased a monument in Rosehill Cemetery in the 1920s in honor of his brothers’ and other soldiers’ service in the Confederate Army during the Civil War. In addition, the Scherck family established the Inez Hotel in 1904 after early success in the dry goods business. Louis Zwirn, a relative by marriage, operated a barber shop in the hotel during the early 20th century, when the Hotel Inez hosted local social events and served as a popular stop for travellers between New Orleans and points north.
​
From their position as merchants, Jews became part of the social fabric of Brookhaven and provided civic leadership for more than a century. Natalie Wilson Cohn, wife of merchant David Cohn, led efforts to raise funds for a public library. By 1910, Cohn’s dream was complete, and she soon became president and longtime board member of the public library association in Brookhaven. Three Jewish men have served as mayor of Brookhaven, even though Jews made up only a small minority of the town. Abraham Lewinthal was mayor in 1889, followed later by furniture and dry goods merchant Sam Abrams around 1910. Abrams was succeeded by his grandson Harold Samuels in the 1970s and 1980s. Harold Samuels was also known for reviving the town’s annual Christmas parade in 1953, and he served as the lead organizer of the parade for more than three decades.
Jewish Life and Religious Practice 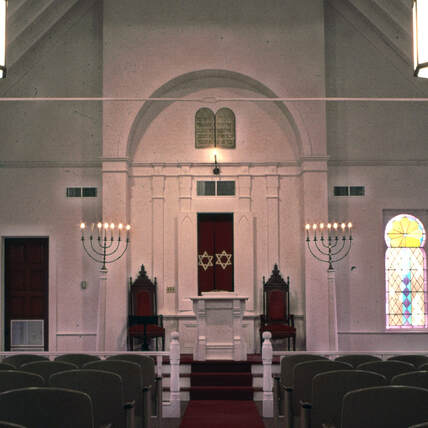 Local Jews initially held religious services in private homes, but by 1894 the Jewish community had grown large enough to support a permanent house of worship. The local Ladies’ Hebrew Society led the effort to form a congregation, soon known as Temple B’nai Sholom. The group met at Heuck’s Opera House until they were able to obtain their own building. In 1896 the Jewish community of Brookhaven built its first (and only) temple through the use of fundraising letters sent to the trading partners of local merchants. These partners—Jewish and non-Jewish alike—contributed to the campaign, and the congregation constructed a Gothic building with stained glass windows and a bell-less steeple at the corner of Chickasaw and Church streets. Rabbi Isidore Lewinthal of Nashville, a relative of many local residents, presided over the cornerstone laying on May 28, 1896. From its inception, Temple B’nai Sholom belonged to the Union of American Hebrew Congregations (later the Union for Reform Judaism) and followed Reform practices.

With a Jewish community that never exceeded 100 people, members of B’nai Sholom took it upon themselves to continue the practices of Judaism.  In the absence of a fulltime rabbi, congregation members served as lay leaders throughout B’nai Sholom’s history.  Sometimes rabbis from other communities or student rabbis from Hebrew Union College would lead services. Jews from such nearby towns as Hazlehurst, Wesson, and Crystal Springs came to worship in Brookhaven since these towns had no Jewish congregations. Brookhaven Jews also traveled to Natchez for some religious events, including community seders and confirmation ceremonies.
Decline After World War II
Brookhaven’s small Jewish community likely peaked in the early 20th century. An estimated 85 Jews lived there in 1907, and that number had fallen to 50 in 1937. By the mid-20th century, the children of Brookhaven’s Jewish families began to move away to pursue educational and professional opportunities that were not available in small-town Mississippi. Despite that trend, services and religious school classes continued to operate on a weekly basis until the 1970s, when the congregation began to limit regular worship to the High Holy Days. The synagogue also continued to host b’nai mitzvot ceremonies and weddings when needed. Until 2009, it was the oldest synagogue in Mississippi still in use. The congregation owned two Torahs: one written by Rabbi Isidore Lewinthal in the late 1890s and a Holocaust Torah from Prague.
​
Despite never having a full-time rabbi, B'nai Sholom managed to serve Jews in and around Brookhaven for over a century.  On August 30, 2009, the congregation held an official deconsecration ceremony to mark the closing of the congregation and synagogue.  The remaining members entered into an agreement with the Lincoln County Historical Society for the temple to be used as a museum of local history, which features the history of Brookhaven's Jewish community and a permanent installation that explains the building’s religious architecture.