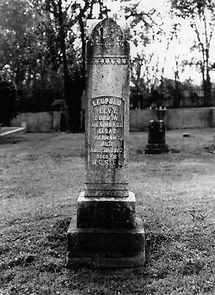 Although Jewish migrants likely arrived in Port Gibson during the 1830s, reliable records do not indicate a permanent Jewish presence until the following decade, when several Jewish families made their home in the small town. Port Gibson’s new Jewish residents generally came from Central Europe—Alsace-Lorraine and the German States—and a few moved there from nearby Grand Gulf. They typically made their livings as blacksmiths, saddle makers, or proprietors of general merchandise stores.

Among the Jewish families to settle in Port Gibson in the 1840s were Samuel and Henrietta (Cahn) Bernheimer, who arrived by 1847. Samuel was a native of Hahenems, Austria, and Henrietta was born in the German states. Samuel first immigrated to New York City and made his way to Port Gibson with stops in Charleston, South Carolina, and Liberty, Mississippi. In Port Gibson, Samuel Bernheimer operated a general merchandise business known over the years as S. Bernheimer & Bro., Bernheimer’s, and S. Berhnheimer & Sons. At various times he partnered with his brother Adolf, with brother-in-law William Cahn, and with his sons. The store carried specialty items from Austria, England, Italy, and Switzerland, which contributed to the family’s financial success. They also accumulated farm land in the area, and made money as landlords and cotton traders. Other Jewish families in Port Gibson before the Civil War included the Ungers, Rosenbergs, and Kiefers (spelled ‘keifer’ in some records).

Port Gibson served as a trading hub for the nearby countryside, which consisted of large cotton farms worked by enslaved Black people. The town benefitted from the ferry landing on Bayou Pierre, which allowed goods to travel by water to the Mississippi River, and then the 1840 arrival of a rail connection to the nearby riverport in Grand Gulf. Jewish migrants found the busy market town to be a favorable environment for business, and more than 50 individual Jews lived there by 1850. Prior to the Civil War, local Jews owned approximately half of Port Gibson’s retail establishments and comprised more than five percent of the white population. Local Jews also began to meet for lay-led services before the war; and in 1859 a group of 22 local Jewish men gathered to sign the charter for their congregation, Gemiluth Chassed (Acts of Loving Kindness, sometimes spelled ‘Gemiluth Chessed’).
The Civil War and Its Aftermath 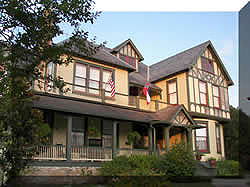 Like their coreligionists in the pre-emancipation South, Port Gibson Jews owned enslaved people when they could afford it and when they could benefit from enslaved labor. Census records indicate that at least four Port Gibson merchants—representing more than ten percent of local Jewish households—enslaved Black workers in 1860. Samuel Bernheimer, Moses Kaufman, Louis Kiefer, and Jacob Ullman all appear in that year’s Slave Schedules, with one or two enslaved Black people listed as the property of each. None of the listed enslavers owned significant property at that time, so the enslaved laborers likely served as domestic workers or porters in Jewish-owned stores.

Jewish residents of Port Gibson regarded slavery with similar attitudes as other white locals. Shortly before the outbreak of the Civil War, for example, Jacob and Lena Ullman’s son Samuel supported the pro-slavery presidential candidate John Breckenridge. Samuel Ullman and at least twelve other local Jewish men served in the Confederate Army during the war. While Ullman fought in Virginia and Maryland, ultimately sustaining two injuries in combat, the Union and Confederacy fought for control of the Mississippi River. Having furnished a substitute to serve in his place, Ullman returned home not long before the Union Army captured Port Gibson on May 1, 1863. General Ulysses S. Grant, who reportedly referred to Port Gibson as “too beautiful to burn,” set up headquarters in the Bernheimer home, one of the nicest houses in town.

Following the conclusion of the war in 1865, Jewish business-owners encountered a challenging economic environment that also offered significant opportunities to accumulate wealth. The 1870 census recorded 36 Jewish merchants in town, who owned or co-owned more than twenty businesses. As in other southern towns, ethnic and kinship networks allowed local Jews to secure merchandise through advantageous credit arrangements. In turn, Jewish shopkeepers and merchants often sold on credit to customers ranging from poor farm laborers to major landowners. In the turbulence of the immediate post-war period, Jewish business owners started to acquire land, either through foreclosure or purchase. Whereas no local Jews owned farmland before the war, six of them did by 1872; in 1883 eleven local Jews owned land.
Religious Life
An increase in the Jewish population and the prospering of many Jewish businesses spurred the development of the Port Gibson congregation. Louis Kiefer, Mayer Bock, and Moses Kaufman purchased a $300 piece of land for  a cemetery in 1871. Prior to that, the Jewish community buried their dead in Natchez or Grand Gulf. The same year, the congregation hired Henry Mayer of Cincinnati Talmid Yelodim Institute to run the religious school. In 1874 they became the first Mississippi congregation to join the Union of American Hebrew Congregations (the governing body of the Reform movement in the United States), and local Jewish men established branches of two national Jewish fraternal orders: B’nai B’rith and the Free Sons of Israel. 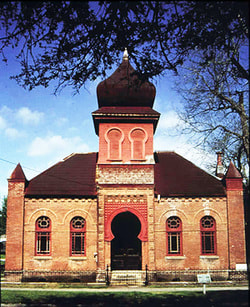 Despite operating both a school and a cemetery, Gemiluth Chassed did not have a permanent building until 1892.  The congregation purchased a plot of land on Church Street in 1887, and laid the cornerstone for Temple Gemiluth Chassed  on January 3, 1892.  The building, which was reported to have cost $12,000, stands out for its Moorish style architecture. Once construction ended, Rabbi Max Heller of New Orleans delivered the dedicatory sermon at the dedicatory ceremony in September 1892.
​
Gemiluth Chassad built its temple and hired its first full time rabbi in the same year, but the community struggled to retain a spiritual leader. Between 1892 and 1908, six different rabbis served Gemiluth Chassed. The rabbis tended to be young men who quickly moved on to larger congregations, and none of them remained for longer than four years. The congregation’s first rabbi, Jacob S. Raisin, took the job at 22 years old, directly following his ordination at Hebrew Union College. Rabbi Raisin expressed dissatisfaction with Port Gibson and its Jewish community. He objected to the overt white supremacy that denied economic opportunities and political equality to the area’s Black majority, and he felt unchallenged by the small congregation. Most importantly, perhaps, Rabbi Raisin found that his low salary stood in the way of his desire to start a family. After sixteen years of frequent rabbinical turnover, the congregation could no longer attract or afford a permanent rabbi, and the congregation relied primarily on lay leadership and student rabbis for the rest of its history.
The Late 19th and Early 20th Centuries 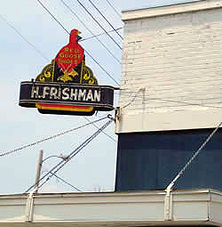 The Port Gibson Jewish population stood at 140 individuals in 1880. Local Jews remained fixtures in the local economy, primarily as shopkeepers and merchants. Jewish-owned stores such as H. Frishman, M. Kaufman & Son, Levy Bros., Louis Abraham & Son, and Isidore Zadek sold a wide variety of farm and household goods. Common wares included shoes, fabric, wagons, plows, seed, and feed.
​
The most prominent family were the Bernheimers. Jacob Bernheimer accumulated 25,000 acres of farmland before his death in 1911; by 1901 the family extended so much credit to commercial customers and tenant farmers that he established the Mississippi National Bank (soon renamed the Mississippi Southern Bank) and became its first president. Jacob Bernheimer’s descendants continued to operate S. Bernheimer and Sons until 1916, when they sold the business to Samuel Weil, a relative. (In 1929 Weil also purchased the historic Bernheimer home, built in 1901 after a fire destroyed their pre-Civil War house.) In addition to owning approximately 30 percent of the town’s retail stores in 1900, local Jews had also become active on the Board of Alderman, the local school board, and the County Board of Supervisors. Jewish men participated in the Odd Fellows, the Masons, and other fraternal and civic organizations. By 1910 Jewish men had diversified there occupations slightly, with two lawyers, two bankers, two newspaper printers, and two farm owners among the usual merchants and store owners.

Whereas Port Gibson’s prospering Jewish community seemed to have a bright future at the turn of the twentieth century, the local Jewish population was in fact at its peak. A reported 131 Jewish individuals lived there in 1907, and that number fell to 121 within three years. The Jewish community also included fewer young people, as several older households moved to town and young people moved out. As in Natchez and other nearby towns, the overreliance on credit-backed cotton agriculture had created an unstable economic situation. Then the boll weevil arrived in Mississippi around 1910 and soon destroyed up to a third of Mississippi’s annual cotton crop. It did the most damage in southwest Mississippi, and Claiborne County saw a 25-percent population decline between 1910 and 1920. The Jewish community lost more than half its population in that time, falling to 52 individuals, as business owners and their children sought more promising opportunities elsewhere, usually in larger cities.
The Decline of Jewish Port Gibson
While the overall population of Claiborne County remained more or less stable from 1920 to 1940, the Jewish population never recovered. In 1939 there were reportedly 44 individual Jews living in town, but only seven Jewish-owned businesses. The population dwindled in the following decades. Temple Gemiluth Chassed continued to hold services for some time, but eventually only on Rosh Hashanah and Yom Kippur. Sometime around 1960 Samuel Weil’s son Karl—an attorney and plantation owner who also served three terms as county alderman—began leading High Holiday services, which were conducted largely in English according to Classical Reform customs.

Claiborne County remained home to a Black majority population throughout the 20th century, and civil rights activism gained momentum there during the 1960s. Black activists, including students at nearby Alcorn College (Alcorn State University), organized a ten-month boycott of white businesses in 1966. Their demands included desegregation of public institutions (in accordance with federal law) and greater representation in local civic life. The few remaining Jewish-owned businesses were affected. Furniture store owner Morris Sherman reportedly wanted to make concessions (as did Henry and Harris Marx) but worried that he would face ostracization for voicing his opinion.

In the 1970s campers from Henry S. Jacobs Camp, approximately 30 miles from Port Gibson, conducted some repairs at the synagogue, which claimed only a handful of members. In 1976 the entire camp traveled to Gemiluth Chassed for Shabbat services. That event was among the final Jewish ceremonies held in the synagogue.

By 1986 Karl Weil was the last remaining Jew in Port Gibson. The congregation dissolved its assets, including a Torah and other artifacts that went to the Museum of the Southern Jewish Experience at Jacobs Camp. The synagogue building had deteriorated considerably and was slated for demolition when a local non-Jewish couple, Bill and Martha Lum, purchased the building. Proceeds from the sale helped to pay for cemetery care. The Lum family had the synagogue repaired and opened the building to the public. As of the early 21st century remaining buildings including the Bernheimer Home (sold by the Weil family in 1996 and operated for some time as a bed and breakfast) and Temple Gemiluth Chassed (at one point the home of a “Messianic” congregation) remain as testaments to the rise and fall of Jewish life in Port Gibson.​
Updated July 2022.​
Selected Bibliography
Emilye Crosby, A Little Taste of Freedom: The Black Freedom Struggle in Claiborne County, Mississippi (Chapel Hill: University of North Carolina Press, 2006).