Overview >> Mississippi >>  Vicksburg
Stories of the Jewish Community in Vicksburg

Early Jewish Settlers of Vicksburg
German Jews arrived in Vicksburg before the town was even incorporated. Most came up the Mississippi River from New Orleans. By 1825, when Walnut Hills was renamed and incorporated as Vicksburg, twenty Jewish families already lived in the area. Most of these Jewish pioneers came from southern Germany and Alsace.

The Sartorius brothers were one of the first Jewish families to arrive in Vicksburg. Quite pious, the Sartorius brothers brought two torahs with them to America, which became the first torahs in Vicksburg. One of the brothers, Phillip Sartorius, left behind a biography of his life for his daughter, Rose Miriam Bock. He wrote especially fondly of his religious practice in Bavaria. He wrote, “None except those who have lived and were raised in a pious Jewish family, can realize how solemn and beautiful our Sabbath and High Holy Days were celebrated.” Soon after entering college, he and his brothers decided to make the trip to America. His ship first arrived in New Orleans, and he immediately went to Vicksburg to join his brothers. He was lured to work in Princeton with a better salary, but eventually, at the request of his brother Isaac, he returned to Vicksburg. Though he and his family were deeply troubled by the Civil War, small pox epidemics, and the loss of several of their children, Phillip Sartorius was ultimately remembered as a great business leader and pious Jew. Not only was he one of the region’s leading merchants, but also served as secretary of Congregation Anshe Chesed.

Another important early figure was Bernard Yoste. He was born in Charlesville, France in 1805. His first home upon arrival in the United States was Berks County, Pennsylvania. By 1840, however, he was established in Vicksburg and had become a naturalized citizen. In addition to being the congregational president and spiritual leader of the early Vicksburg Jews, he was a prominent Vicksburg business man. Though his cause of death is unclear, he died on May 22, 1863 owning nine slaves and having $3,000 loaned on interest. Though his resting place is unknown, a memorial plaque was placed in the city cemetery where the rest of his family is buried.

​Other early settlers include M. A. Levy, who served as a city selectman in 1832 and 1833. Louis Levy and David Brown arrived in 1834, and were closely followed by Julius Hornthal and Abraham Aaron. 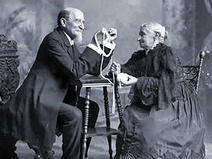 Jewish Soldiers in the Civil War
By the time of the Civil War, many Jews had settled in Vicksburg and grown attached to their new home. Several Vicksburg Jews fought for the Confederacy, including Leon Fischel who served as an aide to Confederate General Albert Sidney Johnston. Leon later named his son Albert Sidney Johnston Fischel. Philip Sartorius was the first soldier to be wounded during the Battle of Vicksburg; he was shot by a Union bullet at Milliken’s Bend. His brother, Emanuel Sartorius, was shot and lost the tip of his finger. Other wounded Jewish soldiers included Herman Nauen and Louis Hornthal, both of whom came from prominent Jewish families.

Jewish Merchants of Vicksburg
By the end of the Civil War, there were 90 Jewish families in town, and 35 Jewish-owned stores.  Many of these recent Jewish immigrants came from Prussia as well as Poland.  The merchant class in the highly agricultural area, they thrived by providing goods and services to local farmers. These Jews became an important part of Vicksburg’s civic and economic life. Jews owned dry goods, furniture, jewelry, hardware, food, and drug stores, as well as several other businesses. Bazinsky Road, Kiersky Street, and Marcus Street were all named for prominent local Jews.

Organized Jewish Life in Vicksburg
As the community grew, Jews organized religiously. In 1841, they formed a congregation described in the local newspaper as the “Hebrew Benevolent Congregation of the Men of Mercy.” The congregation was formally incorporated in 1862 as “Anshe Chesed” (People of Loving Kindness). They dedicated their first synagogue in 1870. Vicksburg Jews formed several other Jewish organizations, including a Ladies Hebrew Benevolent Society in 1866 and a local chapter of B’nai B’rith in 1867.​

In 1871, they formed a Young Men’s Hebrew Benevolent Association, which they later renamed the B’nai B’rith Literary Association. Popularly known as the “B.B. Club,” the group served as the social center for Vicksburg’s Jewish community. Their original building was located on Cherry and Crawford Streets. After the first building was destroyed in a fire in 1915, a new building was erected on Clay and Walnut Streets. It was handsomely equipped with facilities for Jewish social engagements, including a swimming pool, meeting rooms, a fine dining room, ballroom, and a library. In 1967, the building was sold to the city. Recently, it was restored to its original grandeur by mayor Laurence Leyens.
Yellow Fever Epidemics of 1871 and 1878
Life was often difficult in this river city. Yellow fever epidemics in 1871 and 1878 were a major impediment to the growth and success of the Vicksburg Jewish community. In 1871, 11 Jews died in the outbreak, and the 1878 epidemic took 46 Jewish lives—one third of the Jewish congregation at the time. Among the dead was Rabbi Bernhard Gotthelf, leaving the Jewish population both drastically diminished and without leadership. In this time of crisis, however, Levi M. Lowenberg stepped up to conduct services to the ailing Jewish community. Despite this deadly outbreak, the Jewish community of Vicksburg remained strong well into the twentieth century.
Twentieth Century
Another wave of Jewish immigrants had come from Eastern Europe in the late-nineteenth and early-twentieth centuries. They even formed their own Orthodox congregation, though they soon merged with the long-standing Reform congregation Anshe Chesed, which adjusted to embrace the newcomers. In 1927, 467 Jews lived in Vicksburg.

The Jewish citizens of Vicksburg were highly active in World War II. Forty-eight Vicksburg Jews served in the military during the war. The Temple sponsored two families who had fled Europe from Nazi rule. One of these German Jews was Albert Friedlander, who after attending high school in Vicksburg later became one of the leading Reform rabbis in the world. Despite these new additions to the community, World War II had an adverse affect on the community’s population, as many young Jews did not return to the city. Between 1937 and 1948, the city’s Jewish population dropped from 378 to 280. Since then, it has continued to decline along with the rest of the Mississippi Delta.

Civic Impact
Vicksburg Jews made important contributions to life in the river city. Lee Kuhn operated a very successful dry goods store, and—despite having five children—he left the entirety of his estate, $400,000, to City Catholic Charity Hospital when he died in 1953. His will contained the provision that the hospital was to be enjoyed by all people, regardless of race, religion, or financial status. Similarly, he left $20,000 to the temple fund for the purpose of administering aid to the underprivileged local children.

Jews were active in the city’s civic life. Several served on the city’s board of trade. Maurice Emmich served on the Vicksburg Bridge Commission, was president of the local rotary club, and was named “Man of Year” by the Jaycees in 1963. Other Jews served as elected officials, including Abe Kiersky, who served as city tax assessor from 1889 to 1937. Henry Haas served as county tax assessor in the 1950s and 1960s. Lawrence Leyens served as mayor of Vicksburg in the early-twenty-first century.
The Jewish Community in Vicksburg Today
Over the years, the Jewish community in Vicksburg has declined, a product of economic changes, intermarriage, and recent generations’ desire to live in larger metropolitan areas. As in other towns, the Jewish merchant class has faded as changing economics led many young Vicksburg Jews to pursue opportunity in bigger cities. The remaining community is small and mostly elderly.