Overview >> Arkansas >>  Eudora
Eudora: Historical Overview
Eudora, Arkansas is a small town in Chicot County just over the border from Louisiana. Bordered by the Mississippi River in the southeast corner of the state, Chicot County has some of the most fertile farm land in Arkansas. By 1860, several Jews were lived and did business in the county. A handful of Jews were among the earliest settlers in Eudora and helped to build its downtown.
Stories of the Jewish Community in Eudora 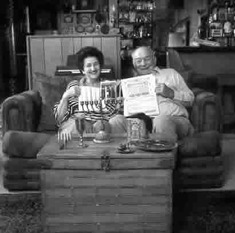 Early Settlers
Adolph Meyer came to the area and settled in Grand Lake, Arkansas, where he opened a mercantile store with his nephew Isaac Dreyfus. With a non-Jewish business partner, Meyer established Cariolla Landing, which became a major shipping point on the Mississippi River. In the late-nineteenth century, the railroad came and overshadowed the river as the main economic engine of the region. Eudora eventually overshadowed Grand Lake as the commercial center in the county once the railroad was built through Eudora. Anticipating the town’s rise, Meyer moved his store to Eudora in the early 1900s when the town was still relatively undeveloped. Many of Meyer’s customers came from the surrounding area; since the roads were so bad, Meyer provided a house for customers to stay in overnight so they wouldn’t have to traverse them in the dark. Meyer acquired a lot of land in the area, at one time owning 30,000 acres. In 1905, he moved to St. Louis, leaving his older sons to run the family business, now called “Meyer, Son and Company, Merchants and Planters.”

The Meyer family remained prominent in Eudora for decades. Adolph’s youngest son Carroll Meyer moved to Eudora in 1928 to open the M & W Store with his partner, Ewell Weinberg. Carroll served on the Eudora city council for eighteen years. Adolph’s other son Reynold Meyer lived in nearby Readland, where he served as mayor and postmaster before serving thirty years on the Eudora school board. Reynold was also a leader of the local business community. His son Alvin followed in his footsteps, serving as head of the local school board and president of the First National Bank of Eudora.
A Growing Community
The Jewish presence in Eudora grew in the early 1900s. Two brothers, Herman and Ferdinand Weis, were also early merchants in Eudora, owning the store H. Weis and Company. Like Adolph Meyer, they originally opened their store in Grand Lake, but moved it to Eudora once this new railroad town outpaced the older river town. M.B. Block was the first person to build a store on Eudora’s Main Street.

By 1911 the community numbered seventeen families, and they formed a congregation named Bene Israel (Children of Israel). Their founding officers were M. Cahn as president, M. Schwartz as vice president, and Sol Meyer, secretary. Jacob Rexinger and his wife Theresia played a crucial role in organizing the congregation. Rexinger served as its lay leader for many years. He had come to Eudora in 1904 and became a clerk for A. Feibelman’s store. Rexinger was a leader of both the congregation and the larger community, serving on the city council and the school board.

Though they used a Reform prayer book, this short-lived congregation never joined the Union of American Hebrew Congregations. They also never had a permanent synagogue, worshiping together at the local Masonic Hall and sometimes private homes. By 1919, they had twenty-five members, though they only held services on the High Holidays. Most of the worship service was in English. When Jacob Rexinger rented a building in downtown Eudora, which he turned into the Rex Hotel, the congregation would meet at the hotel. In the 1920s, the congregation had roughly a dozen children in their Sunday school, which was taught by Maurice Cohen, a Russian immigrant who had recently arrived in Eudora.

The small size of the community encouraged cooperation among members from diverse backgrounds, as established naturalized citizens lived and prayed alongside newer immigrants. In 1910, a single block of Myrtle Street in Eudora contained no less than four of Bene Israel’s charter members. German-born merchant Albert Fishel and his wife owned a large home on Myrtle Street and retained three servants. Down the street, Moses Bluestein, a Russian immigrant and dry good dealer, lived alone in a rental property. The pattern repeated further down Myrtle, where German merchant Abe Khan lived next door to the rented home of Russian tailor, M.G. Stein.

In addition to their diversity of backgrounds and economic situations, the founding members of the congregation varied in age and gender. At age seventy-six, Abe Cahn, an early Alsatian immigrant to the region, served as the congregation’s first president and likely as an “elder statesman” figure to fellow members as young as twenty years of age. Women such as Theresia Rexinger and Missourian Miss Carrie Baer also served an active role in the congregational leadership.

While many of the congregants lived in Eudora, others came from nearby towns. Neighbors Michael Cahn and Simond Marcus traveled from Louisiana Township in Arkansas to attend services. Herman Seelig, Fritz Feibelman and Marcus Delugach all lived across the state line in northern Louisiana in West Carroll and East Carroll Parishes.
Jewish Retail in Eudora
Most Eudora Jews owned or worked in retail stores. Often, younger entrepreneurs lived as boarders in the homes of senior merchants while establishing their own business. Around the turn of the century, Herman Seelig, a community member and resident of Lake Providence, Louisiana housed four Jewish boarders, all German immigrants and traveling salesmen. After establishing themselves they moved out, and by 1910 Seelig lived alone.

During this period, living arrangements often required some creativity, and community members commonly lived with extended family or fellow countrymen. Carrie Baer and her brother traveled from Missouri to reside at the home of their sister and her husband Adolph Teiborman. Younger single men lived together to share expenses, often with immigrants from the same country. Congregation member Simond Marcus shared his home with a fellow Russian Harry Dworsky, and Fritz Feibelman lived at the home of another German named SJR Meyer.

As in many other Southern towns, Eudora Jews made up much of the local merchant class. M. Schwartz owned a store and became involved in local government. He was also president of the First National Bank of Eudora. B. Abrams and Sol Levy were both Eudora merchants who built new brick buildings downtown for their stores. Max Hart came to town in 1926 from Louisiana and ended up buying M. Schwartz’s store. These Jewish merchants often catered to black customers and would close their stores on Rosh Hashanah and Yom Kippur. Economic necessity forced them to be open on Saturdays, the Jewish Sabbath.
The Jewish Community in Eudora Today
The vibrant Eudora Jewish community shone briefly and then dimmed as members moved on to seek opportunities elsewhere. In the mid-1930s, there were 36 Jews living in Eudora. By the late 1930s the congregation had dwindled and officially disbanded. The remaining Jews in town later worshiped either at the synagogues in McGehee or Greenville, Mississippi.

By the 1980s, Jewish retail had nearly ended in Eudora. The one exception was Max Hart’s son Harold, who took over his dad’s store. Harold Hart became very involved in civic life, serving on the city council for ten years and as president of the Chamber of Commerce. He even served as mayor for five months, after the elected mayor had to step down. By the 1990s, he was the last remaining Jew in Eudora. Since they never built a synagogue or acquired a cemetery, few visible signs remain of Eudora’s small Jewish community.