Overview >> Florida >>  Citrus County
Based on the available sources, we believe that this is a complete and accurate overview of Jewish history in Citrus County, Florida. However, we would appreciate input from the community on this history, and we have only secured a few images to accompany the entry. Please contact Dr. Josh Parshall (jparshall@isjl.org) if you have photographs for or comments on this essay.
Overview 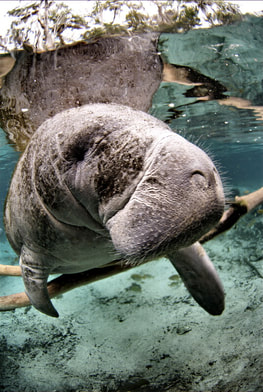 "Endangered Florida manatee (Trichechus manatus), Crystal River National Wildlife Refuge, Florida." Photo by David Hinkel, licensed under CC BY 2.0.
Florida’s Citrus County sits on the southern end of Florida’s Nature Coast, an informal region on the Gulf of Mexico known for its marshy coastline. While the area lacks the natural sand beaches that attract tourists to other parts of the state, Citrus County’s Homosassa and Crystal Rivers provide winter homes to hundreds of West Indian Manatees.
​
Jewish history in present-day Citrus County dates to the mid-19th century, when David Levy Yulee owned a large sugar plantation near the subsequent site of Homosassa, but an organized Jewish community did not form in Citrus County until a 1960s retirement boom brought a cohort of older Jewish migrants to the area. Since the early 1970s Congregation Beth Sholom has been the primary Jewish organization in the county.

David Levy Yulee and Margarita Plantation
The first and best known settler of Jewish descent to make a home in present-day Citrus County was David Levy Yulee, Florida’s first senator and the son of utopian plantation founder Moses Levy. Although Yulee distanced himself from his father’s Jewish identity, he was known as the first Jewish member of the United States Senate. He built Margarita Plantation and its large sugar mill near the eventual town of Homosassa, as well as a home on nearby Tiger Tail Island.

Prior to the Civil War, more than 1,000 enslaved people lived and worked on the 5,100-acre plantation. The mill ceased operations during the war when the Union blockade of the Gulf Coast cut off markets for the syrup, molasses, and rum that it produced. Both Yulee’s home and the plantation served as strategic sites for the Confederate Army until Union soldiers destroyed much of the infrastructure in 1864. The mill survived, however, and is the site of a Florida State Park.
Philip Rubin in Crystal River
Citrus County developed slowly after the Civil War. The area attracted some interest as an early site for citrus agriculture in Florida, but most groves moved farther south following the “great freezes” of 1894-1895. The next known Jewish settlers in the area were Philip Rubin and his family, who moved to Crystal River from Daytona Beach in 1929. Rubin owned a furniture store and served three terms as the mayor of Crystal River. The family returned to Daytona Beach in 1937.

The Jewish presence in Citrus County entered another quiet period after the departure of the Rubins. The county maintained its rural character, and its towns developed slowly. In fact, the population of Citrus County fell by 22 percent in the 1910s (to below 6,000 individuals) and did not completely recover until the 1950s.​
Sam Kellner and Beverly Hills
Whereas economic booms in other parts of Florida attracted Jewish migrants during the early and mid-20th century, Citrus County did not experience significant growth until the 1960s. When development in the county did speed up, it did so in part due to the actions of a Jewish businessman from New York, Sam Kellner.

Kellner made a fortune in the tire business during the 1930s and 1940s, after which he went into construction and real estate development. Around 1960 he purchased 3,500 acres of land in interior Citrus County. Within a few years, Kellner began to develop the former cattle land, selling simple, single-story homes to retirees from the urban North, especially New York and Detroit. Kellner named his new venture Beverly Hills.

Beverly Hills was among the first retirement-oriented planned communities in Central Florida. Like other such developments in South Florida and the Tampa-St. Petersburg area, a private company—Kellner’s Rolling Oaks Corporation—owned most of the non-residential property, including a nearby lumberyard and concrete plant. Purchasing land in a rural, inland area allowed Kellner to market the new community to working class retirees at affordable prices. Beverly Hills proved an early success, growing from 20 homes in the spring of 1962 to around 400 by the end of 1965. In 1972, the development’s population reached 4,500 residents living in 2,200 homes.
Jewish Life in Beverly Hills
By 1968 a small number of Jewish residents had moved to Beverly Hills, and they soon founded the Beverly Hills Jewish Center. A group of ten members began meeting for weekly shabbat evening services in one of the development’s meeting halls, and their numbers grew to 30 individuals within a year. In the early 1970s they began to call themselves Congregation Beth Sholom. The congregation affiliated with the Conservative movement.

Along with the new name, Congregation Beth Sholom acquired its own building. Sam Kellner donated an acre of land to the Jewish community and arranged for the construction of a small synagogue. The original building served as a sanctuary and social hall, but the growing congregation soon required additional space. In 1976 they began construction on an additional facility, which was later named the Kellner Auditorium and used for “social and community events.”

Congregation Beth Sholom built the Kellner Auditorium with the expectation that Beverly Hills, Citrus County, and the local Jewish community would continue to grow rapidly. Developers projected that Beverly Hills would include more than 10,000 homes upon completion, and county planners anticipated the exponential growth of the 1960s and 1970s to continue into subsequent decades. Instead, Beverly Hills grew to 3,800 homes and around 7,500 residents in 1983, and only expanded slowly through the end of the century. Citrus County also experienced slower than expected growth after 1980.

Despite the slowdown in the area’s development, Congregation Beth Sholom maintained an active Jewish presence in Citrus County. After relying on lay people to lead services for over a decade, they hired their first ordained clergy person, Rabbi Edward Portner, in 1981. The congregation reached a membership of approximately 300 individuals in the mid-1980s, but they struggled to retain rabbinical leadership due to a lack of available funds. According to a congregational history, the arrival of Rabbi Zvi Ettinger in 1993 brought new energy to the community. He pushed for a new adult educational program and the establishment of a religious school, which started with five students in 1994 and grew to 13 students two years later. The congregation also expanded its sanctuary building with a significant addition in 1995.
Citrus County Jews in the 21st Century 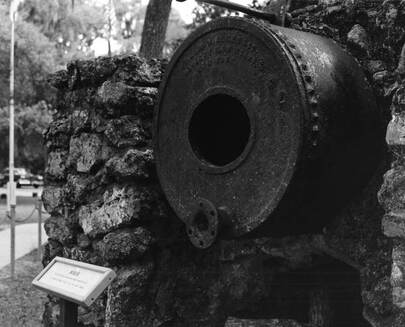 Boiler at Yulee Sugar Mill Ruins Historic State Park. State Archives of Florida.
Congregation Beth Sholom continued its activities into the 21st Century, with regular services and lifecycle events. The religious school operated until at least 2002, and Rabbi Ettinger served the congregation until approximately 2006. Another small Jewish group, Chavurah Shabbat, also met in the early 2000s, holding monthly shabbat services at members’ homes in Crystal River.
​
As of 2019 Congregation Beth Shalom was the only Jewish congregation in Citrus County, as it has been for most of its history. The synagogue observes Friday evening and Saturday morning services under the direction of Cantor Alisa Forman and offers adult education events for its membership. The congregation’s membership demographics—predominantly older adults—still reflect its origins in Sam Kellner’s vision for Beverly Hills and the subsequent Citrus County retirement boom of the 1960s and 1970s. The longer history of a Jewish presence in the county remains visible, however, at Yulee Sugar Mill Ruins Historic State Park in nearby Homosassa.