Overview >> Florida >>  Ocala
Overview
Ocala, located approximately 65 miles northwest of Orlando, is the seat of Marion County, and home to one of the oldest Jewish congregations in Florida. Although Ocala attracted Jewish residents before the outbreak of the Civil War and experienced quick growth in the late 19th century, it never developed into a large city or a major Jewish center. Furthermore, in the early 21st century, the Jewish landscape of Marion County is changing with the emergence of The Villages and other retirement areas outside Ocala

Early Ocala History and the Beginnings of Local Jewish Life
Ocala and Marion County are the home of the Timucua people, a semi-nomadic group of Native Americans who lived in northeast and Central Florida. European diseases, Spanish colonization, and several wars diminished the Timucua population during the 17th and 18th centuries, and the remainder joined the Seminole population before the beginning of the 19th century. Although the United States acquired Florida from Spain in 1821, Euro-American settlement in the area only began in earnest after the United States restricted Native Americans to southern Florida in 1823. 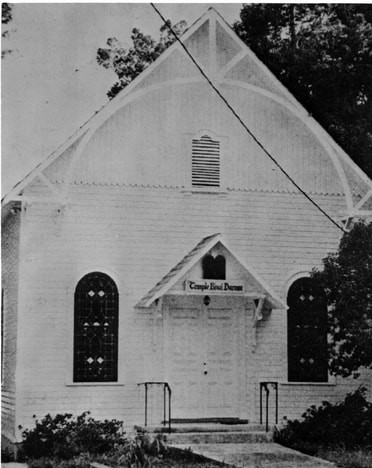 Temple B'nai Darom, 1960s. State Archives of Florida.
​Marion County established the town of Ocala in 1846, and the first Jews in Ocala began arriving shortly before the Civil War. Ocala was one of the first towns in Florida to have a synagogue, established by the United Hebrews of Ocala in 1888. Because of this early foundation, Jewish religious life in the late 19th and early 20th centuries was well organized. This was also the period of the Jewish population’s greatest growth and success; Jews were local leaders and business owners who left legacies lasting well into the 20th century.

Jewish migrants first arrived in Ocala during the 1860s and 1870s. Many of the newcomers to Ocala had immigrated to the United States from German speaking lands and then made their move to Ocala from larger U.S. cities such as Jacksonville and Savannah. As the Jewish population grew, they organized the United Hebrews of Ocala, and by 1873, members Louis Fox, Nathan Crown, and Herman Scherwin purchased the land for a Jewish cemetery. The United Hebrews of Ocala began constructing a synagogue in 1884 and completed the structure in 1888. Later known as Temple B’nai Darom, the United Hebrews of Ocala synagogue was the third to be erected in Florida, after Temple Beth El in Pensacola (1878) and Ahavath Chesed in Jacksonville (1882). Notably, Temple B’nai Darom is the only synagogue in the state with Carpenter Gothic architecture, a style popular among small churches in Florida in the late 19th century. Early leadership of the United Hebrews of Ocala included Fox, Crown, and Scherwin—who helped organize the construction of the temple in addition to the cemetery—and Simon Benjamin—who donated land for the temple and later served as president for ten years. Once local Jewish leaders had established the congregation, the Jewish Women’s Auxiliary directed the social and religious activities of the United Hebrews of Ocala.
Jewish Growth 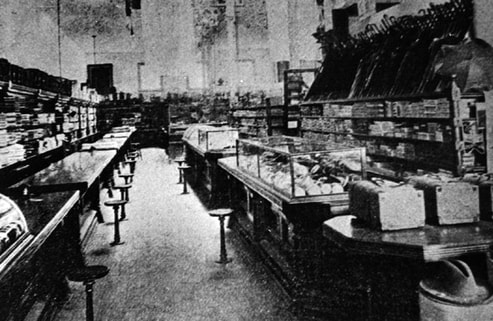 Interior of Rheinauer and Bros, a dry goods and clothing store, c. 1890s. State Archives of Florida.
​The earliest period of Jewish life in Ocala was also the time of some of its greatest growth and success. By the early 1880s, Ocala had become the hub of business and trade in Central Florida. New manufacturing plants and businesses and the introduction of several new railroad lines allowed for ease in transport of both goods and passengers to and from Central Florida. Two Jewish brothers from Prussia, Simon and Solomon Benjamin, established one of these railroad lines, the Silver Springs, Ocala, and Gulf Railroad.

As Ocala’s economy flourished throughout the 1880s, so did Jewish-owned businesses. In addition to his work in the railroad business, Simon Benjamin established the East Florida Ice Making Company in 1889. Using water from Howard Springs, the ice-making plant was the first to open in Florida. Michael Fischel, who immigrated from Germany in 1872, opened dry goods stores in the town. A set of brothers, Charles, Ben, and Maurice (Morritz) Rheinauer, also originally from Germany, helped establish municipal services in Ocala, such as a hospital and bank. Ocala Jews worked both as pioneers of new industry and as local businessmen serving the growing population.

While many of these businesses served the practical needs of a growing city, one of the most popular businesses in Ocala was rooted in luxury: cigar manufacturing. In 1889, Ocala served as the host of Florida's International and Semi-Tropical Exposition, where Cuban workers demonstrated the process of cigar-making. These demonstrations prompted interest in large-scale manufacturing, and, by the early 1900s, the largely Cuban “Marti City” neighborhood of Ocala had housed thirteen cigar factories. At least three prominent Jewish businessman of Ocala oversaw cigar manufacturing plants: Charles Peyser established the El Tropico manufacturing plant, and Nathan Nathans and Charles Rheinauer served as manager and president, respectively, of the La Criolla Cigar Company. 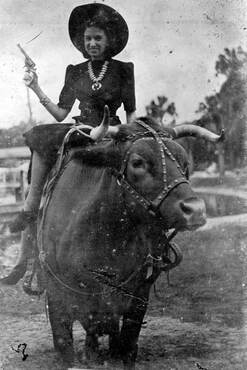 Ruth Frank Gross, Marcus Frank’s daughter, riding a cow in Ocala, 1940. State Archives of Florida.
Another factor bringing Jews to Ocala was a phosphate boom that began in 1899. One of the families involved in phosphate speculation in Ocala were the Franks. Arriving in 1900, Marcus Frank and his mother, Julia Frank (Handelsman), not only followed economic opportunity, but sought to leave behind a few chaotic years in West Palm Beach. In 1896, a soda machine exploded in a fire and killed Marcus’ father, Julius. Shortly thereafter, one of Marcus’ brothers, Jimmie, fell to his death from the top of a coconut tree. Then, in 1899, the State of Florida charged 16-year-old Marcus with manslaughter; he had shot a reporter who slandered and harassed his mother. Despite these tragedies, the move to Ocala brought success for the Franks. Marcus Frank opened “Frank’s Variety Store” in 1930 and became a local pioneer in advertising when he ran the first-ever full-page ad in a Florida newspaper.

As in other small southern cities, business ownership often paved the way for Jews to take on local civic leadership positions in Ocala. Michael Fischel, who was the owner of a dry goods store, the director of the Ocala Building and Loan, and the previous director of the Semi-Tropical Exposition, served as Ocala’s first Jewish mayor in 1900. Charles Rheinauer, who founded Ocala Merchants National Bank, ran a family dry goods store, and was the vice president of Ocala Iron and Machine Works, served as Ocala’s second Jewish mayor in 1906. Simon and Solomon Benjamin, in addition to their work in the ice and railroad businesses, both served on the Ocala Board of County Commissioners. Jewish women participated in Ocala’s women’s organizations in the early 20th century as well. In 1912, Fernanda Fischel, “Mrs. Wolff,” and Hannah Peyser were members of the Ocala Women’s Club, and Emma Rheinauer and Floria Brown were members in King’s Daughters, another women's club. Some Jewish Ocala citizens even held state-level positions; Marcus Frank, who began his political career as a city councilor, won election to the Florida state legislature in 1939 and 1949.
Late 20th Century
​The Jewish population of Ocala remained relatively stable throughout the 20th century. Ocala Jews, like all Floridians, experienced turbulence during the state’s early entrance into the Great Depression in 1926, and some left to seek employment elsewhere. Families with deeper roots in Ocala, such as the Franks and Malevers, stayed in Ocala throughout the century, but less established individuals, such as single men like Max Israelson, left during the economic downturn. However, community histories indicate that in- and out-migration were common within the Jewish population of Ocala throughout the first half of the 20th century. 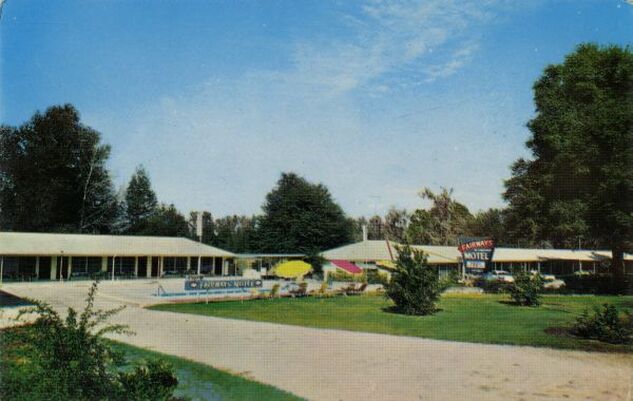 The Fairways Motel, 1950s. State Archives of Florida.
​Despite the population turnover of earlier decades, Ocala Jews continued in their roles as local business owners and leaders in the latter half of the 20th century. In the 1950s, Sophia Levin and Noami Anne Kash opened The Fairways Motel, a successful enterprise that operated for decades. The Wolfsons, based in Jacksonville, established Harbor View Farm near Ocala and raised American thoroughbred horses there in the 1960s and 1970s. They owned and bred the first horse from Florida to win the Triple Crown, Affirmed, who won the Crown in 1978 and would hold the title for nearly forty years. The Wolfsons were a part of an overall growth of thoroughbred horse breeding in Ocala that began in the 1940s and is still strong in the 21st century. In addition to new ventures, many of the businesses that Ocala Jews started in the early 20th century still operated under family management into the late 20th century. One business that embraced the introduction of shopping malls in the 1980s was the Maas Brothers Store, a large department store chain in Florida that opened as an anchor store for Paddock Mall in 1980. While the Maas Brothers headquarters was in Tampa and the company operated stores throughout, the Ocala location harkened back to the menswear and dry goods stores Isaac Mass owned in downtown Ocala in the late 19th century.

In October 1975, the splinter group held its first meeting at a Holiday Inn, and by December they gathered at Harry and Idell Berman’s home to establish Temple Beth Shalom. The congregation started with 25 families and held services in member’s homes and storefronts until they bought a building in 1977. In 1976, the congregation employed its first student rabbi, Samuel Rothberg, who visited to lead services twice a month. The congregation’s first full-time rabbi was Max Weitz in 1977, but he unexpectedly passed away within the same year. Rabbi Morrison Bial acted as the leader of Temple Beth Shalom from 1985 to 1995, but the congregation struggled to find another full-time rabbi until Rabbi Samuel Dov Berman joined them from 2001 to 2008. Rabbi Ze’ev Harari has been the spiritual leader at Temple Beth Shalom since 2011. Temple B’nai Darom had stable leadership under Samuel Eff until 1981. In 1987, they hired a new full-time rabbi, Rabbi Harold Jaye, who was still with Temple B’nai Darom as of 2019.
The 21st Century
As of 2019, the Ocala Jewish community continues to support Temple B’nai Darom and Temple Beth Shalom, which are both Reform congregations. It also has gained new congregations in the 21st century, including Congregation Beth Israel and Temple Shalom of Central Florida, as well as Chabad Lubavitch of Ocala, The Villages, and Tri County. Congregation Beth Israel, a Reconstructionist congregation established in 2009, holds monthly services in the Canterfield Assisted Living community. Temple Shalom was founded as a Reform congregation in 2012 and has many congregants from retirement communities near Ocala such as On Top of the World and the Villages. With a congregation of over 600, Temple Shalom has surpassed the older Ocala congregations as largest hub of Jewish life in Central Florida.

The only religious school in the Ocala area is Temple Beth Shalom’s Morrison David Bial Center for Jewish Education. In 2022 Temple Beth Shalom moved into a new building, known as The Ocala Tree of Life Sanctuary, which it occupies with the First Congregation United Church of Christ. Each congregation has its own kitchen and worship spaces, but they share classrooms and common areas. The Tree of Life Sanctuary building is part of a new residential development located ten miles southwest of downtown, reflecting the suburban migrations of Ocala-area Jews. Temple B’nai Darom is located a short distance away, having moved from its 1976 structure to a new building in southwest Ocala in 2018. Meanwhile, the original 1888 Temple B’nai Darom building stands as one of the oldest extant synagogues in the United States, although it has been used by Christian congregations since the 1980s.  With retirees continually moving to Central Florida, Jewish life in Ocala may look different than it did in the early 20th century, but the original markers of Ocala Jewish life continue to persist alongside the growing community.