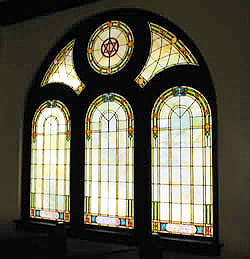 Organized Jewish Life
With enough Jews between 1890 and 1910, Greenwood began to form the foundations of a Jewish community. In 1897, a group of merchants met in a store house and formed the first synagogue, a Reform temple named Beth Israel. This temple remained small throughout the 20th century and held worship services on Friday nights and during the High Holidays while also providing a Sunday school, a youth group, and a woman’s group.

​In 1907, the Orthodox congregation Ahavath Rayim was founded and featured traditional services in Hebrew frequently led by a resident rabbi. Both congregations not only served residents of Greenwood but also towns nearby like Itta Bena, Winona, Belzoni, Moorhead, Indianola, Sunflower, and many more. In addition, the two congregations shared members and were friendly to each other, welcoming children to joint youth group activities. Despite this cooperation, differing religious philosophies prevented the two from ever merging, which is quite an interesting phenomenon for such a small Jewish community.

In 1894, local Jews founded the Mark Stein Lodge of B’nai Brith; the lodge later changed its name to the Albert Weiler Lodge in honor of the former Temple Beth Israel president. B’nai Brith, known for its fraternal service and social activities, was quite popular in Greenwood. Starting at a time when there were only about one hundred Jews in town, B’nai Brith grew to as large as 63 members in 1955 and still had over twenty members into the late 1970s.

Jews in Greenwood: A Part of the Community
While B’nai Brith was popular with local Jewish men, they also participated in non-Jewish fraternal and civic organizations. The Lions Club, Kiwanis, Exchange, the Rotary Club, the Elks, and the Masonic Lodge all had multiple Jewish members, reflecting a general acceptance of local Jews among white Christians. Jewish families also found welcoming homes in other realms of Greenwood society, including Greenwood Little Theatre, the Community Concert Association, Greenwood Country Club, Leflore Country Club, and the Chamber of Commerce. Without a doubt, the Jews of Greenwood were considered part of the citizenry in Greenwood, not separated by foreign practices, as had been the case for their past lives in Russia and Germany.

The 1920s and 1930s
The Jewish community grew during the 1920s and 1930s, despite economic setbacks. While business certainly tightened during the Great Depression, the Jewish community grew to over three hundred people by 1937. During this period, such names started to become synonymous with Greenwood including J. Kantor’s and Weiler Jewelry Store. Other establishments such as Kornfield’s Inc. Department Store and Starr Tailors were founded around the end of this period as well.

The 1940s
The 1940s was a period of change for the Delta economy. Commerce began to decline in places like Greenwood because of a lack of industry and a heavy reliance on agriculture, particularly cotton. Cotton had been king in Greenwood throughout most of its history; however, the cash crop was not as lucrative anymore. As a result, the Jewish community declined by half by the end of the decade. While the economy began to change, Greenwood’s Jewish community did not perish; instead, it began a renaissance that benefited both congregations. While Beth Israel became more classical Reform to accommodate Jews new to the area, Rabbi Samuel Stone greatly increased membership at Ahavath Rayim. This growth was occurring at the same time as the foundation of the state of Israel, a period that divided the Greenwood Jewish community. Although some feared that Zionism would lead others to view Jews as unpatriotic, many Jews of Greenwood disagreed and started bond drives for Israel. In its initial year, a group from Temple Beth Israel gave $35,000, with $10,000 donated in subsequent years. 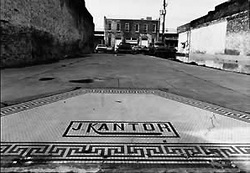 Ilse Markus
Ilse Markus was a young girl in Germany during the 1930s. With Hitler’s rise to power, Ilse saw her father sent to a concentration camp after Kristallnacht, believing that she would never see him again. Shockingly, the Nazis miraculously released him because of his World War I honorable discharge papers. The Markus family fled Germany, landing in China, where they owned and operated a small grocery store. After receiving their American visas, the family came to Memphis, Tennessee, where Ilse met and married Ervin Goldberg of Greenwood. For years, she and her husband ran Goldberg’s Shoes and Sportswear; the business remained in the family. The Goldbergs were members of the Orthodox synagogue and were a very religious family. Named Greenwood Commonwealth Mother of the Year in 1993, Ilse used to buy frozen kosher meat from Chicago and St. Louis and get a truck to ship it down to Greenwood where she would stock over five hundred pounds of meat in her multiple freezers. In the 21st century, the Internet and a butcher in Memphis made life much easier, but this story shows the commitment of a Jewish woman to keep her faith.
The Jewish Community in Greenwood Today
At the end of the 20th century, the Jewish community of Greenwood continued to decline. In the 1970s the Jewish population neared two hundred, it had reduced by half by the 1980s. In addition to the changes in the cotton industry, many of the older residents had passed away, while the younger generation had departed with college degrees, becoming doctors and lawyers in urban and suburban areas. Many Jewish-owned stores closed; some of their buildings no longer exist. Others still remain, but not to the extent of Jewish commercial life decades ago. By the 1980s, Greenwood’s Temple Beth Israel had diminished to the point that the synagogue closed. Ahavath Rayim’s membership has also greatly decreased, yet it still functions today as a synagogue with holiday services and a regular Torah study session. No longer strictly Orthodox, Ahavath Rayim members have adjusted their practices according to the needs and capacity of the remaining membership, yet their services remain traditional compared to other congregations in small-town Mississippi.