Overview >> Mississippi >>  Yazoo City
﻿Historical Overview
Early Jewish Settlers
According to local history, the first Jew in Yazoo City was Louis Rosenberg, reportedly an ordained rabbi who arrived sometime before 1850 from Posen, Poland. Despite his religious background, he quickly assimilated, marrying a non-Jewish woman named Sarah Sayers, with whom he had four children. Rosenberg became an innkeeper in Mechanicsburg, Mississippi. His children married non-Jews and did not participate in Jewish religious or communal life.

Naturalization records indicate that other Jews trickled into Yazoo County around the same time. Samuel Friedlander completed the naturalization process in Yazoo City on May 3rd, 1843, and three other Jewish immigrants sought citizenship there the same year. Other Jewish settlers followed in the subsequent decades, including Abraham Roshenthal, who was naturalized in Yazoo County in  1860. These applicants for citizenship did not necessarily put down permanent roots in the area, however. Freidlander and his wife Lena, for example, moved to New Orleans as early as 1859.

Another early Jewish settler, Solomon S. Zelnicker served in the Confederate Army during the Civil War. He was born in Rawicz (then in Prussian territory and later in Poland) and immigrated to the United States in 1852. He married Louise Newton, a Jewish woman from New Orleans, in 1856. Yazoo City suffered significant damage during the war, and the Zelnicker family departed for New Orleans around 1863. They later lived in Mobile, and Solomon Zelnicker ultimately died in Tampa, Florida.​
Reconstruction and the Late 19th Century
The Civil War disrupted life in and around Yazoo City and resulted in the destruction of much of the town, but the area rebounded in subsequent decades as the Delta became the premier cotton growing region of Mississippi. Formerly enslaved Black farmers flocked to the area in search of better opportunities. While few managed to avoid the exploitation of tenant farming and sharecropping, they did make Yazoo County the second most populous county in the state. (Despite the area’s Black majority, white vigilante groups such as the White League curtailed the possibility of Black political and economic power.) Both the growing population and rising cotton yields made Yazoo City attractive to new Jewish migrants, who built a larger and more stable Jewish community in the post-Civil War era.

By 1878 approximately 45 Jews lived in Yazoo City. Jewish-owned businesses included a hardware store called Harris and Nierman and the Independent Lock and Ladder Company, run by David Wolerstein. The Wise Brothers’ Store was founded in 1875 by Herman Wise. He and his brother Louis Wise had arrived in Yazoo City around 1870 along with their wives, Eugenia and Julia. Wise Brothers’ began as a dry goods store and remained a retail fixture in Yazoo City until 1969 when it was sold by their descendants. Louis and Herman’s retail success also allowed them to purchase cotton farmland.
In 1875 Yazoo City Jews set out to organize a congregation, named Benai Isreal, in anticipation of continued Jewish growth. Emil Schaefer served as the founding president, with Louis Wise elected secretary. Members Reinhold and Fisk volunteered to lead services. Many members were relative newcomers, but Schaefer already played prominent roles in local civic life as a town alderman and school board trustee, and as a member of other fraternal and business organizations. The congregation boasted nearly thirty members at its founding, but most of the Jewish population consisted of single men. Although a local correspondent to the American Israelite newspaper wrote enthusiastically about the congregation’s founding, Benai Israel left little other historical trace, indicating that the congregation was a short-lived endeavor. Yazoo City Jews were more successful in founding their own cemetery, which saw its first burial in the early 1880s and remained in use for a century.
The Early 20th Century
The Delta Jewish population surpassed other areas of the state at the beginning of the new century, but the small Jewish communities still faced their share of challenges. In Yazoo City a major fire destroyed the entire shopping district and more than 100 nearby homes in 1904. While local legend attributed the disaster to the “Which of Yazoo,” the fire actually started at the Wise family home on the day of Pauline Wise’s wedding. The American Israelite reported that every Jewish family lost their businesses and homes.

In the aftermath of the fire, Jewish merchants like William Hirsch were quick to rebuild. The Yazoo Centennial characterized him as a businessman, “upon whom discouragement and disaster seem to act merely as incentive to greater effort, and he is to-day conducting a larger business in a finer store than was the case before the fire.” The business had been was started by William's father, Myer, who left Germany with his wife Rose in 1884, leaving their young son William with his grandmother. She later brought 5-year-old William to Yazoo City.

Like Hirsch, other town residents quickly rebuilt new brick buildings, and the Yazoo City economy recovered in a short time. In fact, from 1909 to 1919, a city-owned street car system operated on the principal streets, the first of its kind in the nation. By 1937 the Jewish population reached 61 people, and that number likely reached its peak sometime in the 1940s.​ 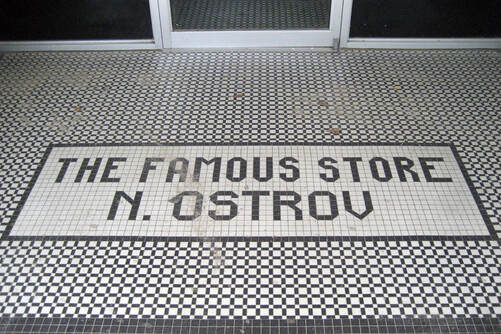 Entryway to the former Famous Store, once owned by N. Ostrov, c. 2007.
While Yazoo City Jews still did not have their own congregation, they did travel to other towns for Jewish events. In September 1941 the Yazoo City Herald reported on local High Holiday observances, noting that Jewish businesses would be closed for Rosh Hashanah and Yom Kippur and that many Jewish residents would travel for the occasions. Most Jewish owned businesses closed for one day of Rosh Hashanah in keeping with Reform practice, but others—including N. Ostrov’s The Famous Store—observed two days of Rosh Hashanah according to Orthodox tradition. Yazoo City Jews spent  holidays at nearby congregations in Jackson, Greenwood, Memphis, and other cities. Additionally, a short notice from the same month indicates that several Yazoo City families—the Rosens, Ratners, and Adelmans—had enrolled their children in Sunday school at Beth Israel in Jackson.
The Mid-to-Late 20th Century
When Yazoo City’s Jewish population peaked in the 1940s, the general population of the county had already begun to decline. As in other areas of the Mississippi Delta (and the South in general), poor living conditions, agricultural mechanization, and the economic uncertainty of cotton monoculture pushed Black farm workers to seek greater opportunities in cities, often in the North. This outmigration of workers and customers continued through the 1960s, and Jewish businesses became less profitable as a result. At the same time, young Jews sought their own economic and cultural opportunities, often leaving the area for college and then settling in larger cities. Although Jewish citizen Harry Applebaum served as the mayor of Yazoo City from 1954 to 1960, the town’s Jewish population had begun to shrink by the 1950s. Both Jewish businesses and Jewish residents became fewer over the subsequent decades, until only the cemetery and a handful of former storefronts remained as evidence of the city’s Jewish history.