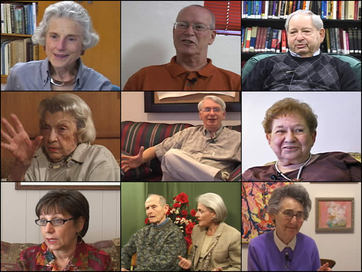 The interview excerpts on this page have been selected to accompany a program for the Education Department's Family Education Supplement.  These clips, and the corresponding lesson, deal with themes of Jewish, Southern and American identity.  They also focus on historical and present-day trends within small-town Jewish communities. This collection of interview excerpts is merely the first step in an ongoing effort to make our growing collection of multimedia interviews available to the general public.

Small Communities at Their Peak:
​Interviews About Southern Jewish Heydays

Freda Stein grew up in Cary, Missippi, and attended Brenau College in Gainesville, Georgia.  After graduating in 1933, she moved to Greenville, where she met her husband, Jake. In this 1999 interview excerpt, she talks about Jewish social networks in the Mississippi Delta, as well as events put on by local civic groups.
Monroe, Louisiana

During an interview in 2000, Saul and Jean Mintz discuss Jean's mother, Roselyn Strauss.  They remark on Roselyn's acceptance and comfort in Monroe society, even though her family and other Jews were not invited to join a local country club until after World War II.
Dumas, Arkansas

Jerry Tanenbaum was captain of his high school football team in the early 1950s.  In this clip from 2009, he talks about an instance in which an important game coincided with Yom Kippur.

Rusty Milstein still lives in Longview, where he grew up. In this clip from 2007, he compares the social lives of local Jews in his parents' generation with his own peers, who are typically more integrated into the broader community.
Oak Ridge, Tennessee

In a 2009 interview, Mira Kimmelman describes changes in the Oak Ridge Jewish community.  Beginning in the 1940s, the community attracted Jewish scientists who worked at the Oak Ridge National Laboratory.  Recently, fewer Jews have taken jobs at the lab.  Both retireees and new arrivals tend to favor nearby Knoxville with its greater variety of Jewish resources.
Jackson, Mississippi

This clip comes from a 1998 interview with Kathryn Wiener, who grew up in Montgomery but now lives in Jackson, Mississippi.  She discusses how economic problems in small and mid-size cities have led young Jews to seek opportunities elsewhere.

While Jewish presence has diminished in most small Southern towns, Jews have by no means vanished from these areas. Roz Clark returned to Greenwood after living most of her adult life in Memphis.  In an interview from 2007, she talks about Jewish life in present-day Greenwood and her commitment to its once vibrant Jewish community.
Tupelo, Mississippi

Marc Perler moved with his wife Polly from Greenville to Tupelo in the late 1970s.  In a 2009 interview, he describes their initial involvement with the local temple, B'nai Israel.
Oak Ridge, Tennessee

Fran Silver discusses the changing make-up and level of involvement in the local congregation.  This interview took place in 2009.